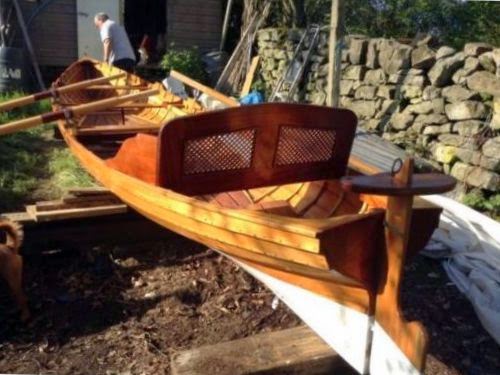 Some nice boats on eBay at the moment. This beautiful Thames skiff is the product, I suspect, of David Winspear up near Whitby. David is a craftsman of the old school and builds his boats by eye.

What looks like a Salter skiff tricked out with all the add-ons is for sale in Bridport. A bit OTT for my taste - the foredeck seems to be made of decking - but you've got to love the cushions.
And finally the Claydon skiff Myrto, which I wrote about recently here. Some dramatic pictures of her in action - she would be a great addition to any club's fleet offering safe, stable but exciting rowing. 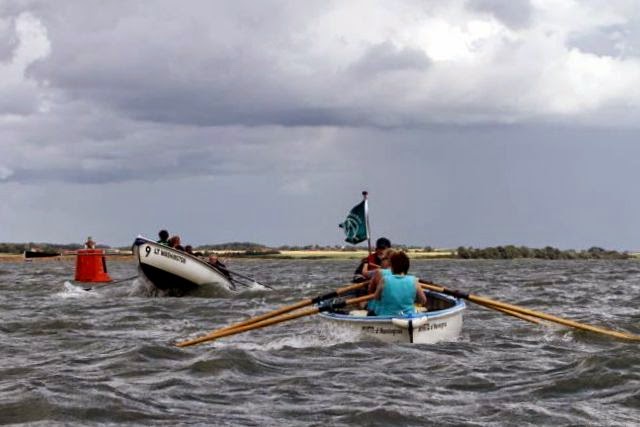 Posted by Chris Partridge at 10:10 No comments: 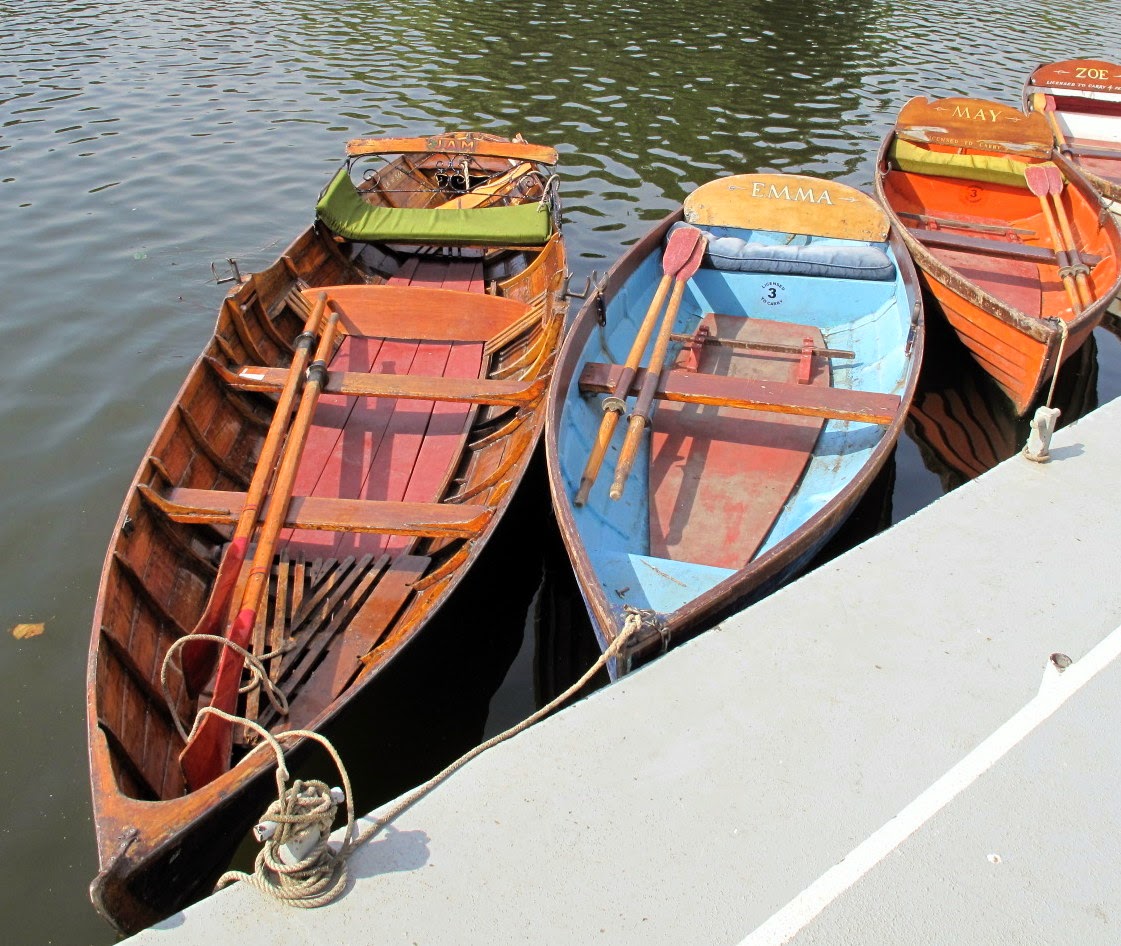 Hello Chris,
Just saw your post on Richmond Bridge. It reminded me that four years ago on a visit to London we rented a rowing skiff there (above) per your advice, and I wanted to thank you. A few pictures from that trip are in a Flickr album here.
Up near Teddington we ran into this bunch out training (below), and had a little race (they beat us eventually). I never found out who these guys were, do any look familiar to you?
All the best,
Rick 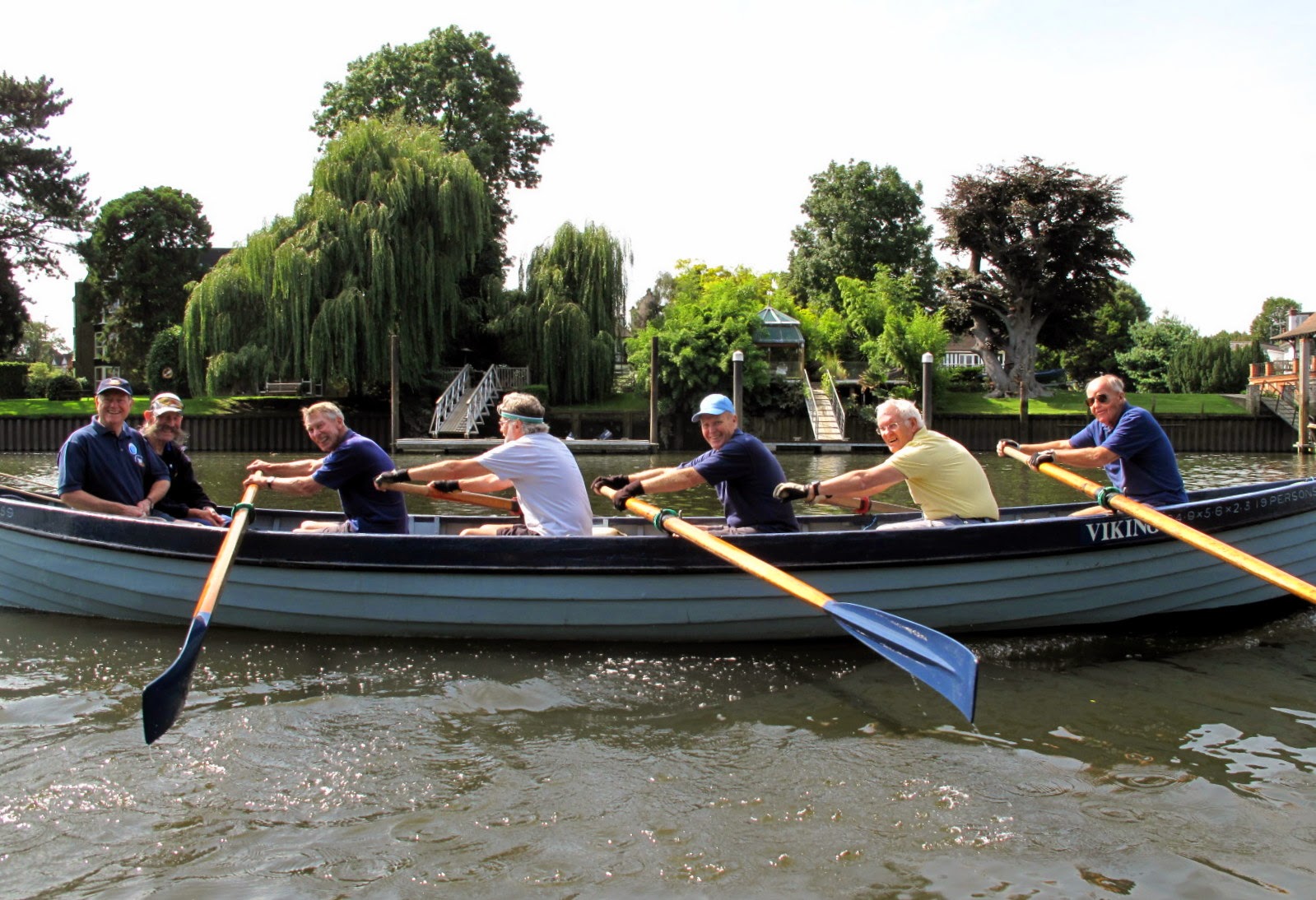 Lovely to hear from you, Rick, and I'm glad you had better weather when you went to Richmond than we did!
Viking is a very interesting boat. She belongs to the 14th Richmond 'Viking' Scout Boating Centre and was their first boat, bought back in 1932 for ten bob - roughly £180 in today's money. She was originally built as a lifeboat for the liner Worcestershire, which was launched in 1904 and tragically sunk by a mine off Ceylon in 1917.
The crew are a great bunch, the 14th Richmond Old Rovers, average age now over 70. They compete every year in the Great River Race, where every year they are beaten by Langstone Cutters' Codger Crew in Gladys. But our average age is something like 65 so we have an obvious unfair advantage.
Posted by Chris Partridge at 11:37 No comments: 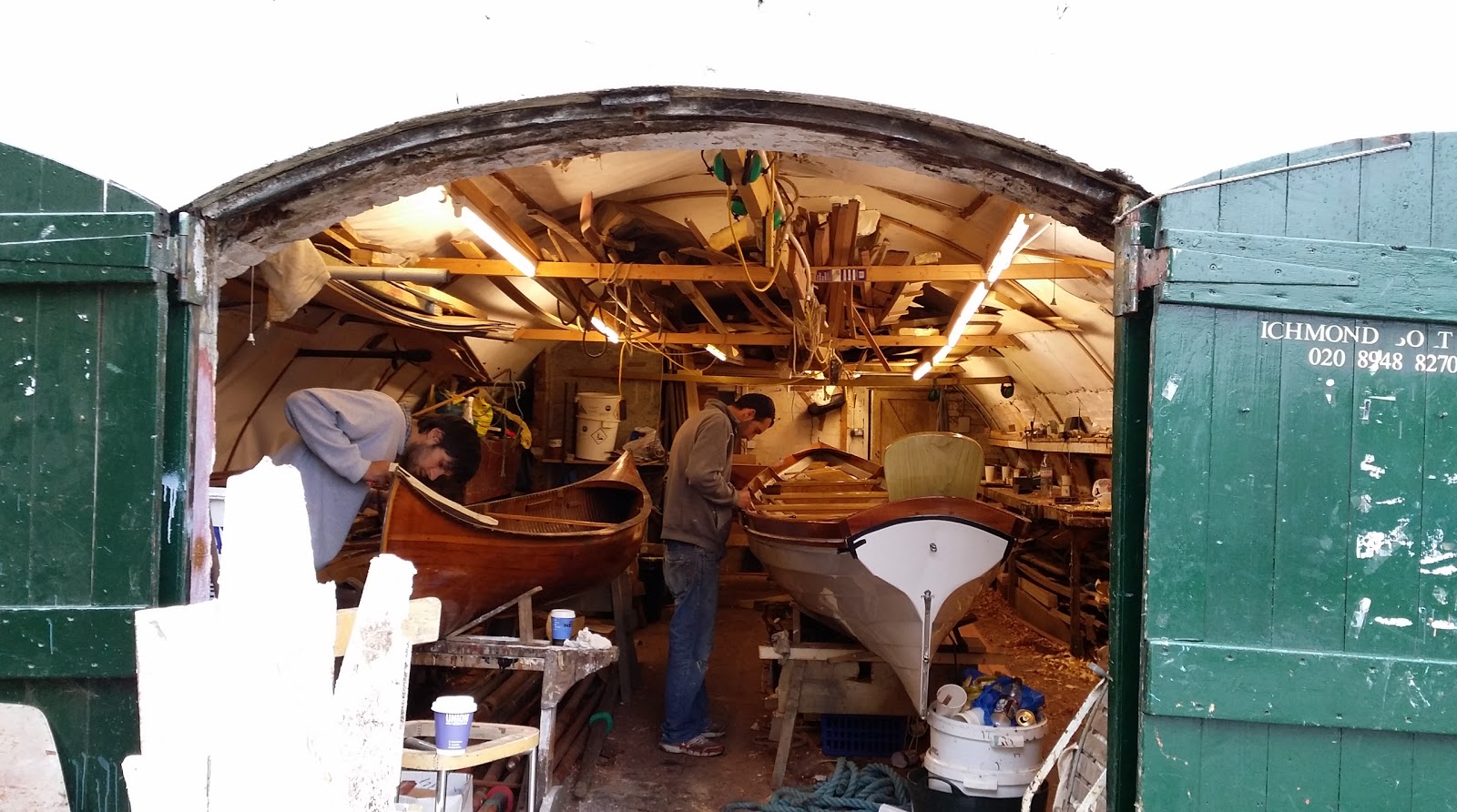 To Richmond yesterday to coach a crew from a major corporation who want to compete in the Great River Race in September.
The venue was Richmond Bridge Boat Club next to the bridge. On arrival I passed one of the arches under the bridge used by boatbuilder Mark Edwards with a canoe and what looks like a Jolly Boat under construction. I asked who they were building it for and he said "some random group of rich businessmen."
Looks like Mark's business model is thriving.
Then we went out in a pair of Thames Waterman's Cutters. I have to tell you that sharing the back seat with a trainee cox is a bit chummy.

Pic taken by Mike Gilbert in the other boat.
Posted by Chris Partridge at 19:41 1 comment: 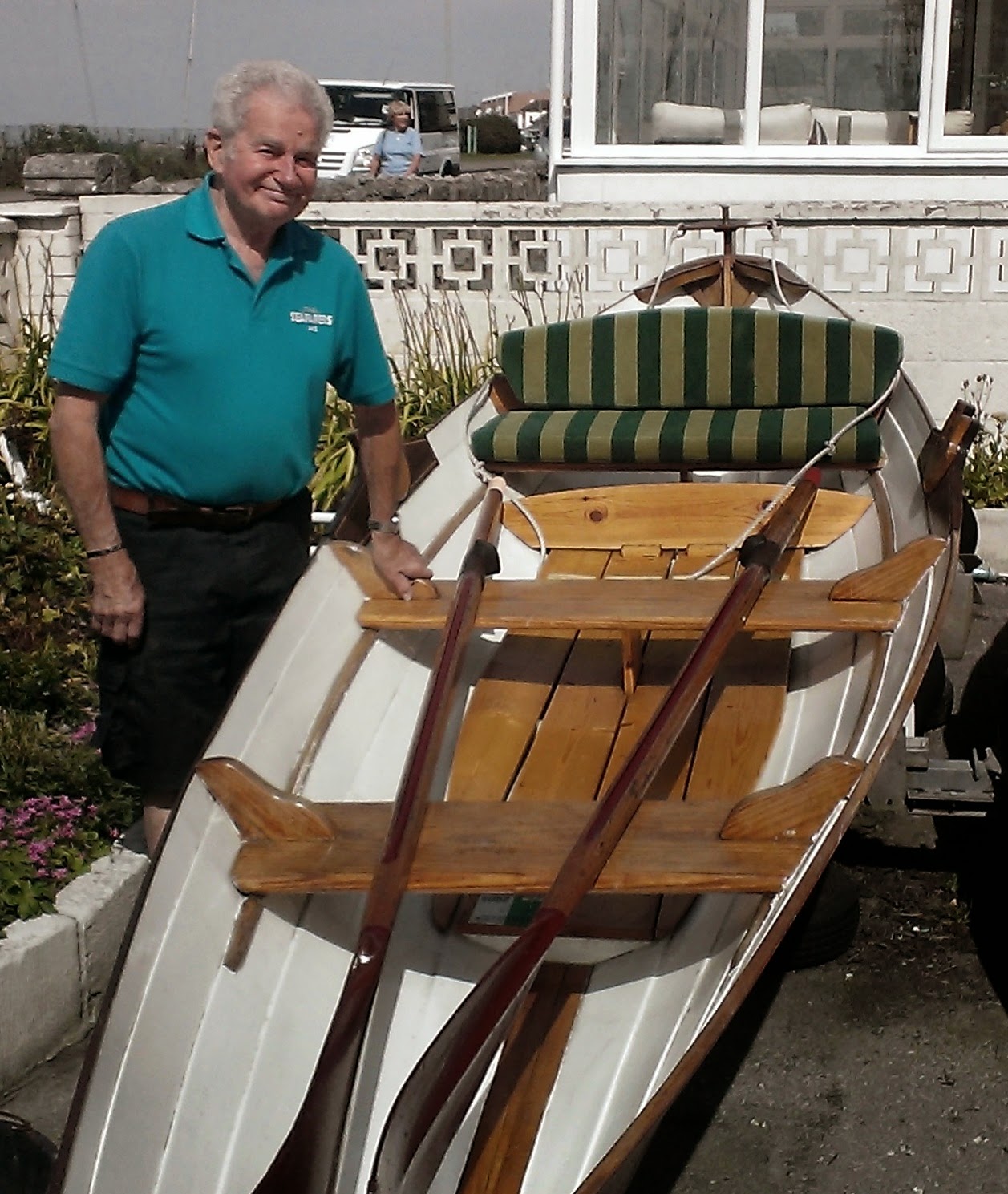 Jim Hames built this Thames skiff to Iain Oughtred's designs. She's a single sculler, 17ft long and uses thole pins rather than rowlocks - the included blades may need new leathers apparently. The cushions look ideal for a lady steerer with parasol.
The boat is for sale at £600 ono, trailer not included. Lying Lee-on-the-Solent.
Jim is a serial boatbuilder, his most recent project being a Finn sailing dinghy (also for sale). He also built a wherry that he and his son Roger entered in the Great River Race for many years.
If you are interested, drop me an email and I will put you in touch.
Posted by Chris Partridge at 14:49 2 comments: 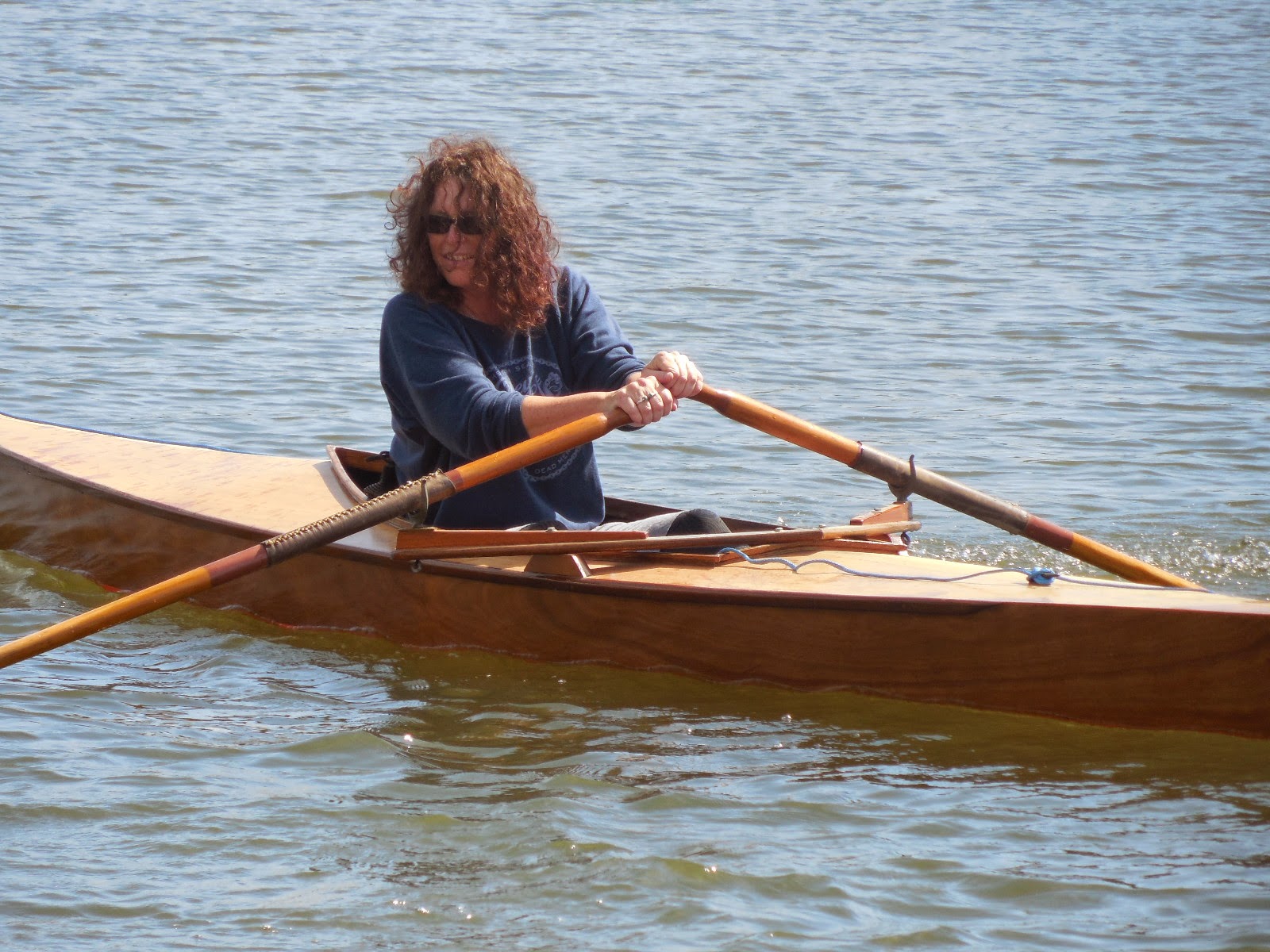 Doryman's new kayak Wild Rose can be rowed.
Or paddled. 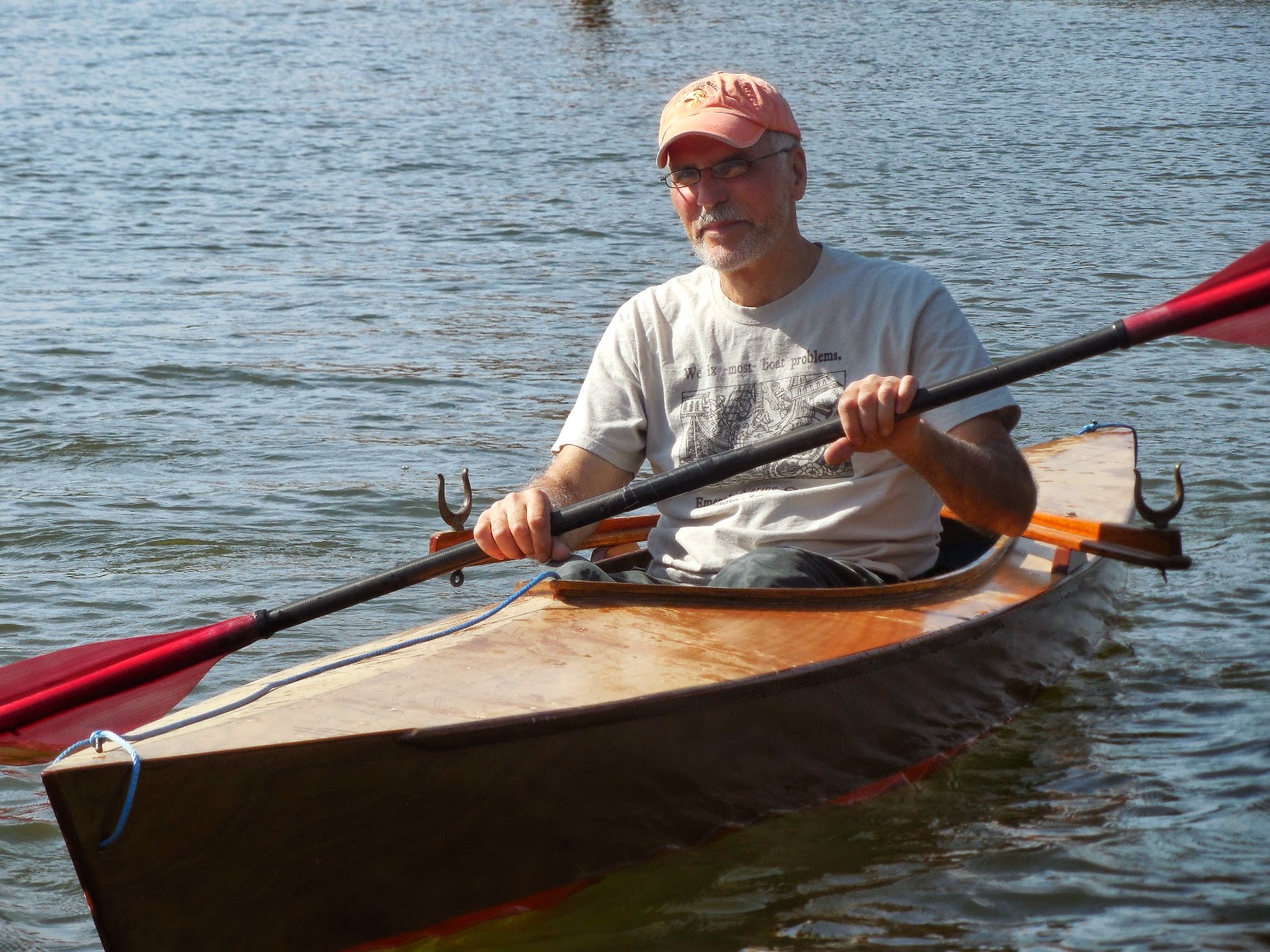 This would be a brilliant solution for this sort of problem, faced at the top of the Arun last year. I had to row up the last bit in reverse, and couldn't make the last few hundred yards at all: 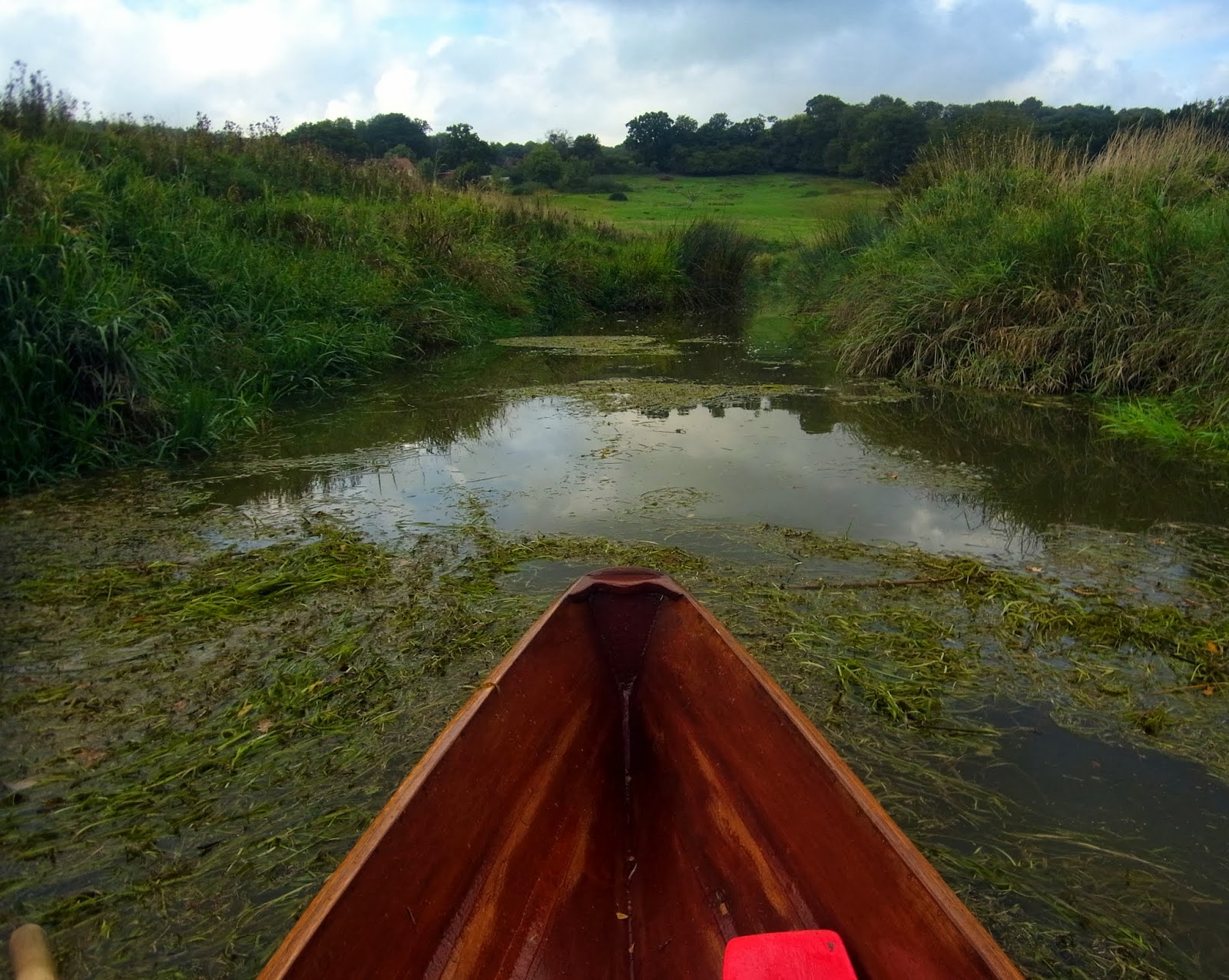 The trick is to design a boat that can be propelled in either direction without looking as though it is going in reverse. I would prefer an open boat though.
Which reminds me - I happen to have the plans for this: 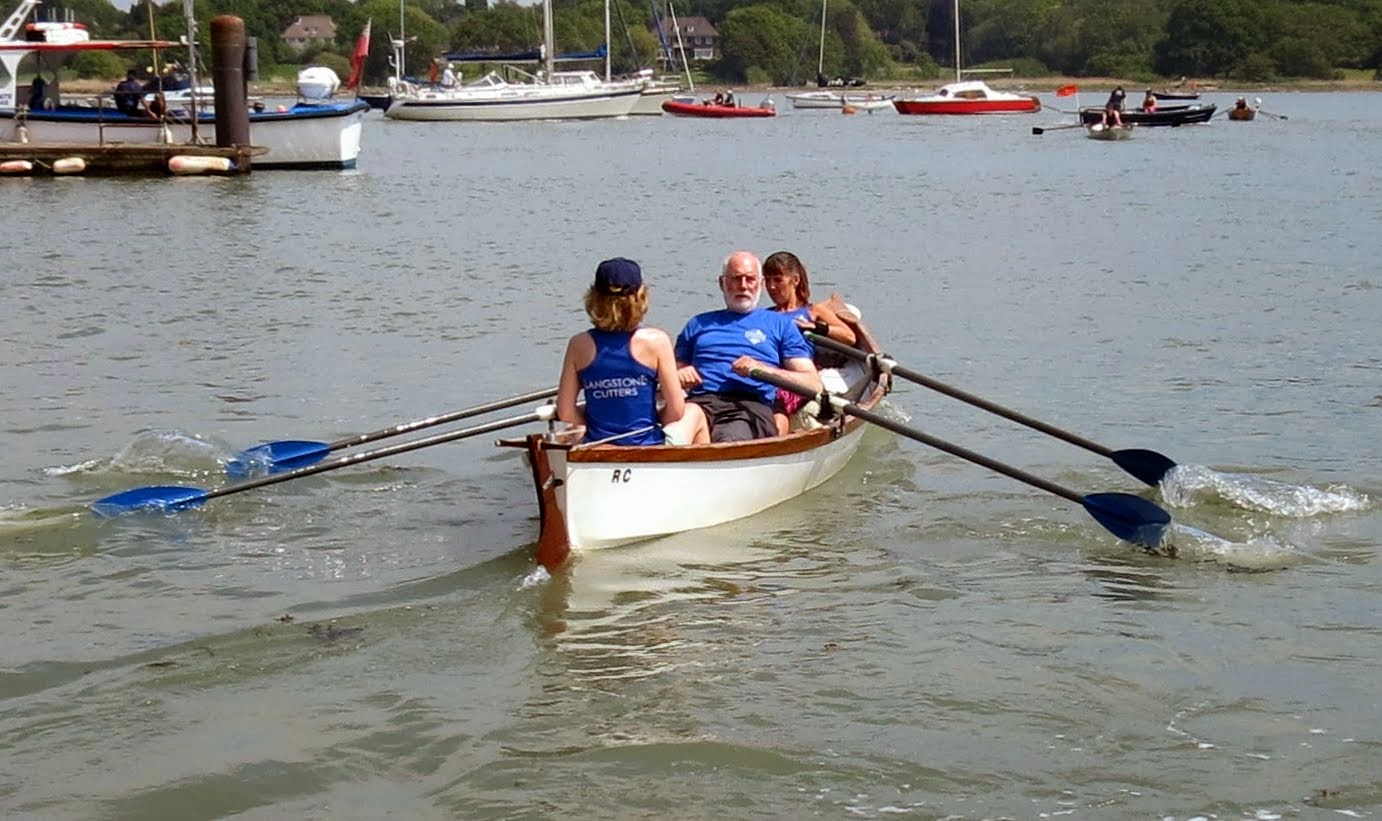 Just one more shot from the Hamble River Raid 'cuz it's my blog and I can, of Christine Ball and I powering off, leaning well back, lots of power coming off the blade. Frances Taylor was coxing.
The photo was taken by Ron Williams, our man on the bank with the long lens - there is a slideshow on YouTube here.
Posted by Chris Partridge at 19:47 No comments: 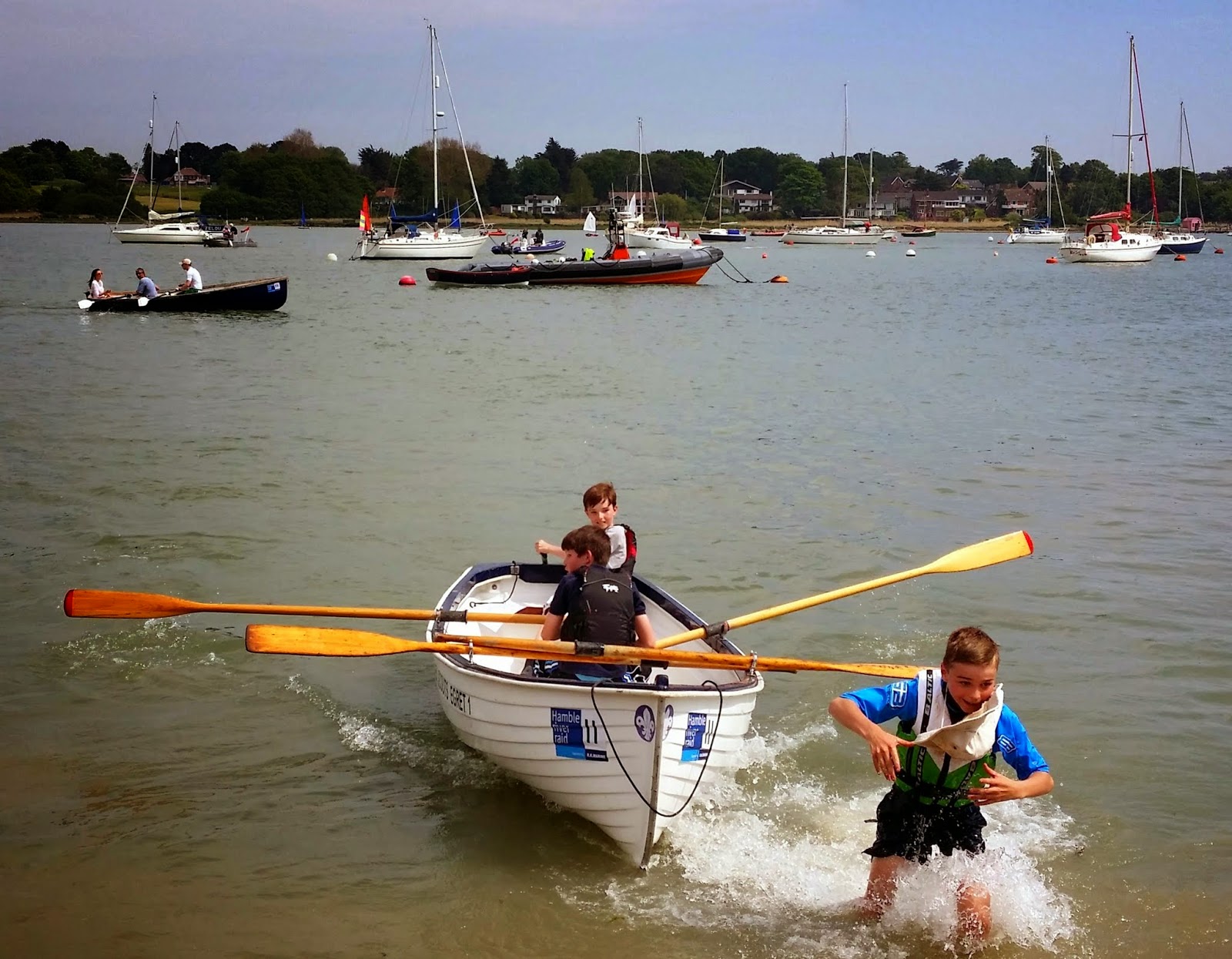 One of the unusual and endearing features of the Hamble River Raid is the Le Mans start. The river isn't wide enough to race side by side, so the start is timed with the crew sitting in the boat and the cox next to a bell in front of the official timer's tent. When the bell rings, the cox sprints down the beach, leaps in the boat and off they go.
At the finish, one crew member, usually the bow man, has to jump out, sprint up the beach and ring the bell. It is very entertaining and even exciting when a bunch of boats arrives at the same time.
Another endearing feature of the race is the number of children racing enthusiastically and well - they rowed hard and long. The picture above shows a crew of Hamble Sea Scouts landing their Egret skiff.

A GRP pilot gig rigged with square rowlocks (very sensible choice I think) was named in a short ceremony before the race - here she is finishing. An excellent achievement for a crew that had barely set bum in boat before the race.

Bembridge, Langstone Cutters' newly restored and generally fabulous Solent galley finished in style with Paula hopping out of the bow with balletic grace.
I'm afraid to say Christine, Frances and I in Millie didn't realise we had to ring the bell because the Odds'n'Sods class is let off the Le Mans Start. Some of the odds'n'sods are boats of beauty with rudders that get damaged apparently. Also, I didn't get a picture of us finishing because I was in the boat facing the wrong way, obviously. But we did get a picture of our start, courtesy of the River Raid Facebook page - take a look, there are some really good images there. 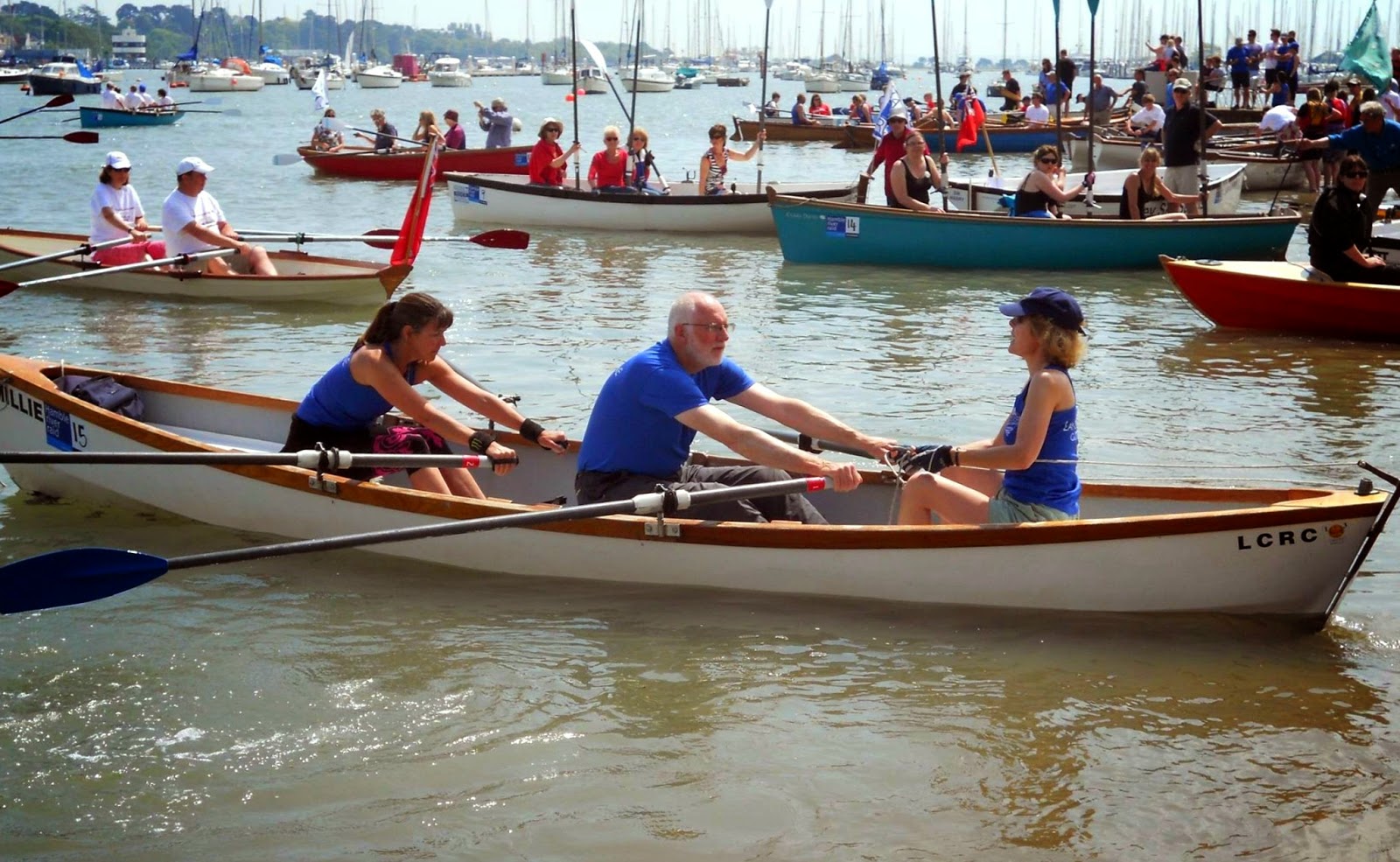 Posted by Chris Partridge at 20:43 No comments:

To the Hamble River Raid, where Langstone Cutters fielded three boats for the first time, Solent galleys Langstone Lady and the newly revarnished Bembridge, and Teifi skiff Millie. The weather was fabulous and the beer tent did not run out, both in stark contrast to some previous years.
But the big new trend was a new, higher standard of T-shirt wit.
Hamble River Rowers had these: 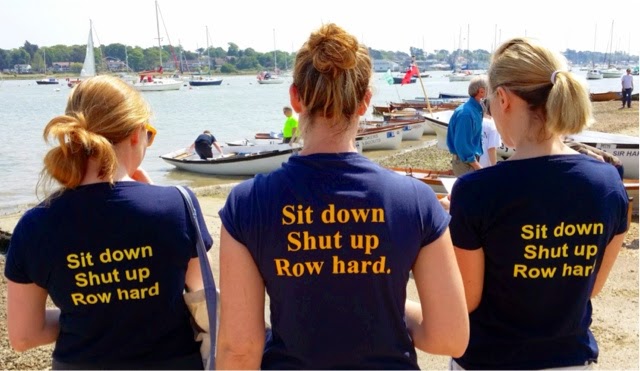 My favourite rowing family had two boats in the race, their Bursledon gig Mistress and the Head of the Family's new skiff Cordelia (they said the children don't want to row with them any more as they want to win. How sharper than a serpent's tooth it is, to have a thankless child!).
Anyway, they had new T-shirts. The family name is Hand... 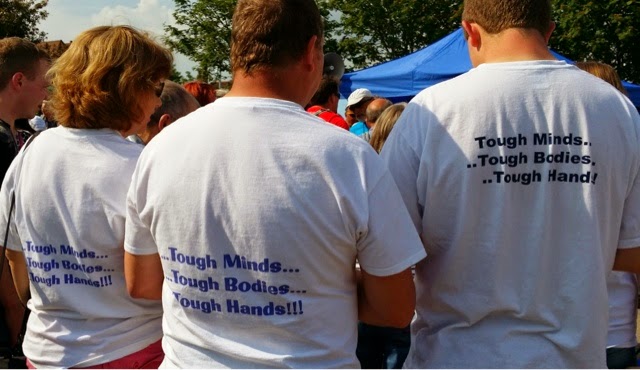 St Ayles skiffs from Annan on the Scottish side of the Solway Firth are scheduled to raid the town of Bowness on the English side this weekend.
It is all part of a feud that began in 1626 when some Annan men rowed to Bowness and stole the bell from the church, more as an insult than theft. Unfortunately, the men had been drinking, the bell was heavy and the boat was small: the bell went overboard and was lost forever.
The men of Bowness did not take this lying down, of course. A retaliatory raid was organised and the bells of Dornoch and Middlebie were taken and hung in Bowness church. To this day, apparently, the minister at Middlebie politely asks for his bells back and is just as courteously refused.
On Saturday, the Annan Harbour Festival will re-enact the original raid with a race across the Solway Firth under Scottish Coastal Rowing Association rules, but with the variation that crews must be dressed up and every boat fly a 'magnificent flag.' It should be quite a spectacle.
The 'raiders' will be 'fiercely resisted' in Bowness by local schoolchildren as they recover a symbolic bell, happily one that is unlikely to endanger the crew as they return.
It sounds fantastic fun and if I was not committed to the Hamble River Raid down south, I would be very tempted to go up. Details of the event are here.
Posted by Chris Partridge at 11:29 1 comment:

Chris Duff Resumes Where He Left Off 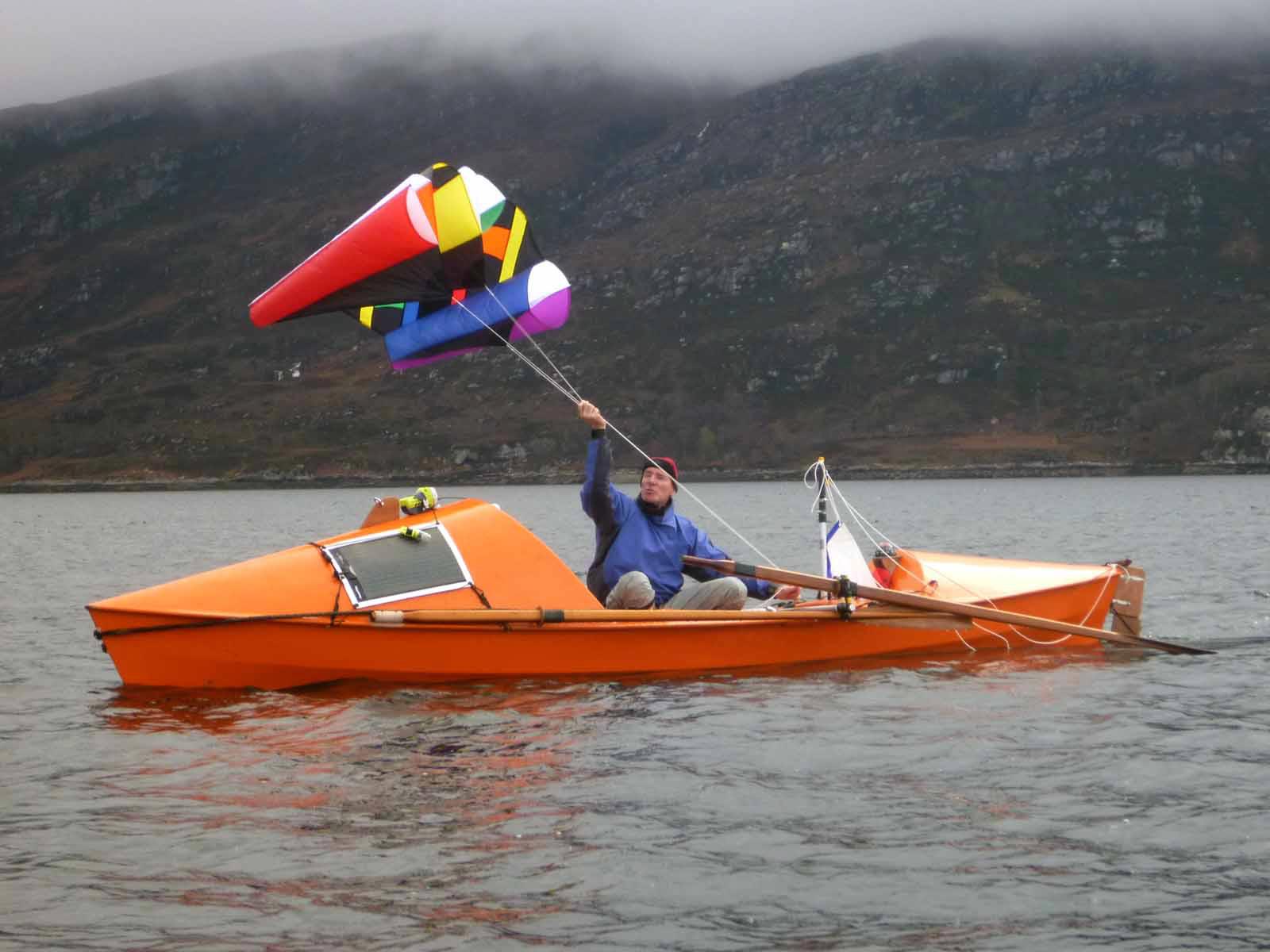 Readers with long memories may recall Chris Duff, who in 2012 set out to row from Scotland to Iceland in a boat very similar to the one on the masthead above, albeit adapted with cabins fore and aft and a small kayakers sail.
He had to abandon ship at the Faroe Islands as the weather window slammed shut. Now he is back and getting the boat ready for the last leg. More details here, and follow him on Facebook!
Posted by Chris Partridge at 19:20 No comments: 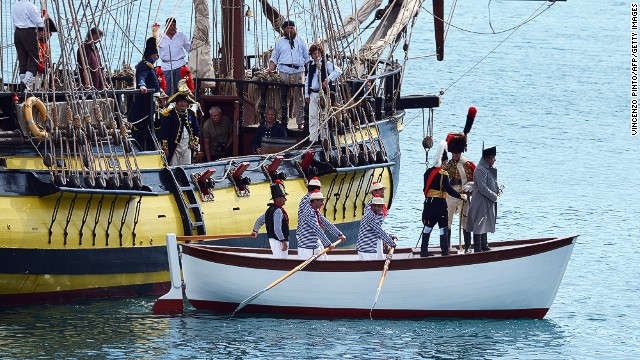 Napoleon has gone to Elba, again. This time, in the form of a re-enactment to celebrate the bicentennial of the dictator's exile. Boney had captured the island, with the rest of Italy, and after his forced abdication he was made its king and sent to live there.
The Nappy look-alike was taken ashore on a gozzo, an attractive traditional fishing boat from the area. It has a tremendous freeboard so it can be rowed standing up, facing forward, in the Venetian style, though propulsion was normally by sail (a lateen), now usually by a small diesel.
In point of historical fact, Napoleon arrived not on a gozzo but a much grander vessel - the captain's barge of the British frigate HMS Undaunted. But at least the gozzo was designed and built by an Englishman in Italy - Peter Radclyffe.
More on the festivities here, and a tip o'the hat to Gavin Atkin.
Posted by Chris Partridge at 21:35 No comments: 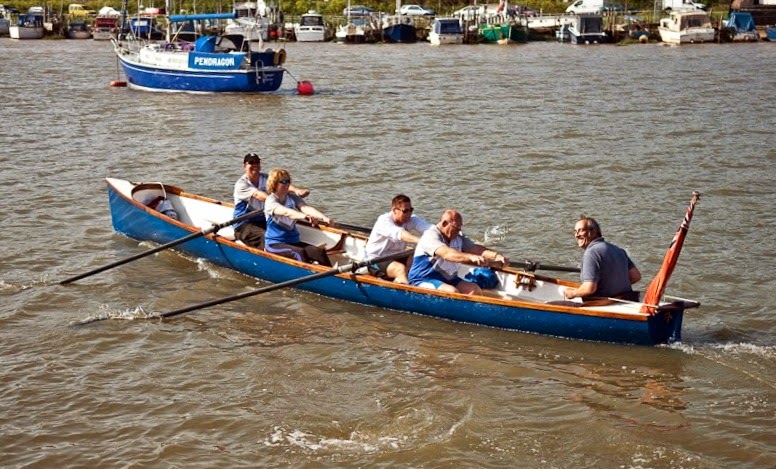 Over in Essex, the Seax gig that has been taking shape over the last few months has hit the water. Designer and builder Keith Webster says it take a little while to acclimatise to but is very quick. She has a lot of features I really like, such as decks fore and aft and a nice wooden garboard to add a bit of class. Can't wait to give it a whirl...
Posted by Chris Partridge at 11:09 2 comments: 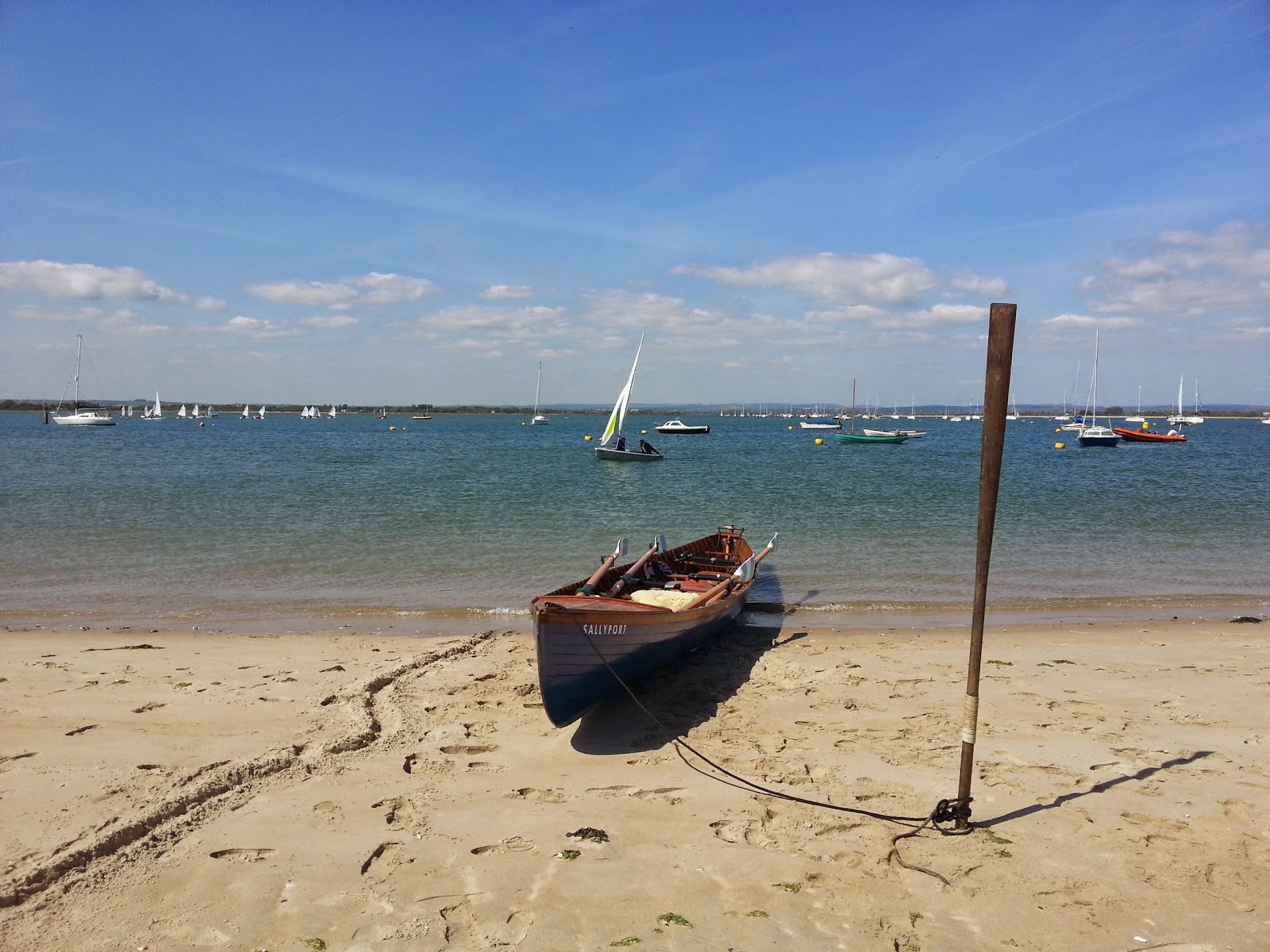 This being the May Bank Holiday weekend, rain was anticipated. So we rowed down to Hayling Island Sailing Club, stuck the Coxswain's Fending-off Oar into the sand and went for beer on the terrace.
Posted by Chris Partridge at 09:27 3 comments: