Dimbleby Round My Parts 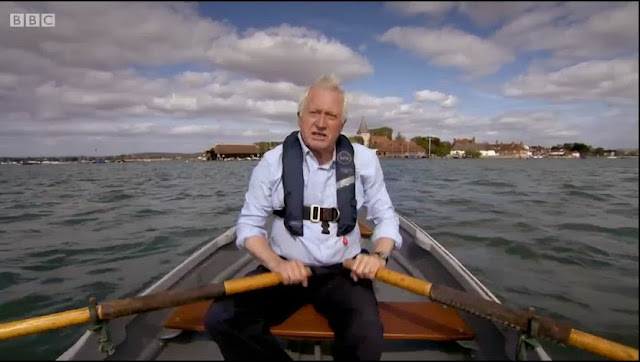 And who should be rowing up to Bosham but David Dimbleby, in his latest TV docu-thing Britain and the Sea, yet another farrago of high mind and middle brow almost as bad as his previous effort Seven Ages of Britain.
At least he takes to the oars again, bless him, in the rather attractive tender to his repro gaffer Rocket, fitted out with nice bronze crutches (the technical name for that rowlock shape) and traditional sculling oars with leathers.
So it would be churlish to point out that he was rowing with one leather out of the crutch, a good way to damage the shaft very quickly. And the fact that the stitching is underneath the oar where it will be worn away by the crutch shows he has the blades the wrong way round.

Took a novice crew out early on Saturday morning in adventure gig Deborah (one of the plastic pilot gigs used to train cross-Channel rowers). The two proper wooden gigs Heart of Hayling and Spirit of Langstone swept past, powered by crews training for next year's regatta season. They looked great.
On the downside, I realised that I haven't been on waters further than six miles from Langstone for far too long. I need to get out more.
While I plan something, have any readers had any good rowing adventures lately? Send me the details, with lots of pictures! 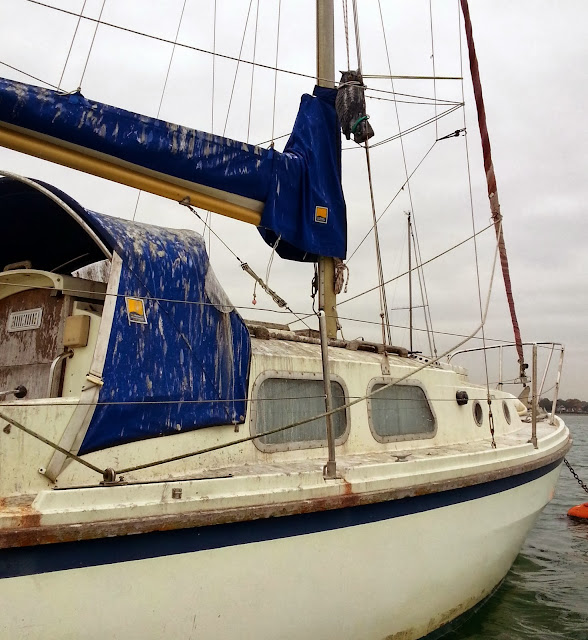 A question for you experts out there: Does hanging a plastic owl in the shrouds deter gulls from pooping all over your boat?
(Picture taken in Emsworth channel today).
Posted by Chris Partridge at 19:29 4 comments:

The next step in the colourful if obscure history of the Claydon skiff was the spread of the type to Gravesend, the town on the Thames where the Indian princess Pocahontas died.
Gravesend has a very long established regatta, first recorded as long ago as 1698. After the war, the Town Regatta Committee bought four traditional clinker-built, 21ft skiffs for racing, including the Long Ferry Race from Westminster to Gravesend. This punishing event retraced the route of a ferry granted exclusively to the watermen of Gravesend by Royal Charter in 1401. Winning boats were presented with decorated backboards (the backs of the passenger seat), several of which hang in local rowing clubs and pubs to this day.

The wooden boats eventually fell victim to time and were replaced by a number of Claydons, but by this time the name seems to have morphed to Clayton.
The hull was slightly different as well, and usually regarded as slower than the Felixstowe boats. For several years they had a slightly better handicap at the Great River Race but that seems have been eliminated these days.
According to the Gravesend RC website:

The popularity of this type of rowing lives on, with crews of both sexes and all ages formed from local clubs and pubs. Today there is still much cross-over between the two types of rowing, with many Gravesend RC members competing in skiff events, and many skiff rowers continuing to train and race throughout the winter as members of the rowing club.

Gravesend brought one of their Claydons down to Langstone Regatta in 2009 and whopped us round the course, but it seems that most of the star rowers of that crew now row sliding seat coastal boats, and no Gravesend-based Claydons have been entered in the GRR for some time. A great pity - does anybody know what is happening to them?

(Photos from the Flickr stream of Paul Johnston)
Posted by Chris Partridge at 17:14 No comments: 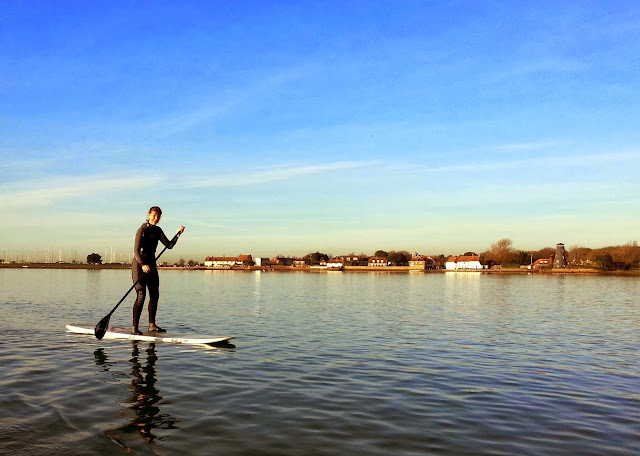 Amazing what a bit of extra light does for image quality. Went out in Lottie, one of the Teifi skiffs, at 09.00 this morning and met Christine Ball getting a bit of paddleboarding in before work. That's the Mill and the Royal Oak behind.
It was so warm I was down to my T-shirt in no time. What month is it?
Posted by Chris Partridge at 19:43 No comments: 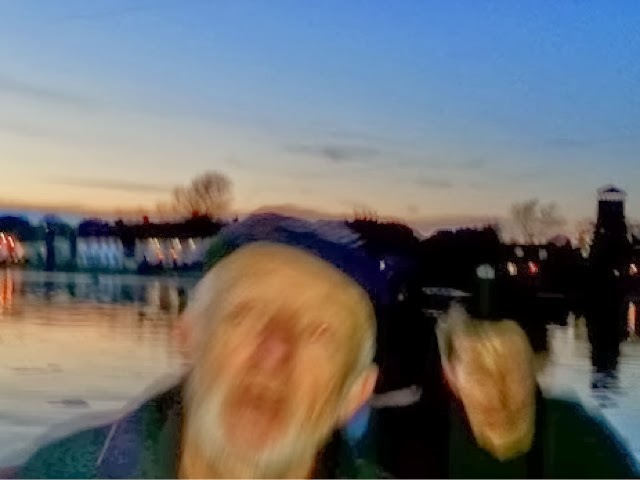 Cap'n JP at captainjpslog.blogspot.co.uk has been comparing all his fancy cameras, including a Canon DSLR, an incredibly compact mirrorless Sony NEX, an Olympus water/dust/shockproof jobby and his Google Nexus 5 smartphone (only just out - what a slave to tech he is).
I seem to have been taking only my Samsung Galaxy Note II phone out recently. Yesterday on the evening tide off Langstone I discovered that its low light performance is not...so...very...good.
In fact, the image looks like something Edvard Munch might have knocked out on one of his less optimistic days at the easel.
I must resume packing my Ricoh splashproof camera. Or possibly get one of they Nokia Lumias with the 41 megapixel sensor.
Posted by Chris Partridge at 18:22 2 comments:

Yet another big bloke in a small boat 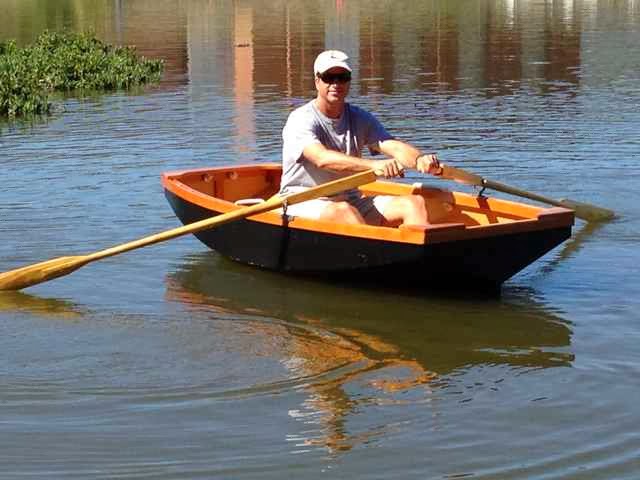 This is John Konstanzer of North Texas rowing his new rowboat, built to Jim Michalak's WeeVee design. It is just 7.5ft long, with a deep V hull after which the design is named.

John gives an excellent account of the build and launch at Duckworks Magazine. He reports that getting in is a bit of a challenge, which is to be expected with a boat that has very little below the waterline at the edges, but that she has a remarkable turn of speed for such a short boat. Jim himself also noted this.
But the really nice thing about boats this size is that they are so easy to take to the water and launch, allowing you to grab those opportunities that might otherwise pass you by.


Posted by Chris Partridge at 10:18 No comments:

Early Days of the Claydon Skiffs

More Claydon myth-busting.
I had been told the mould had been taken off a Thames workboat used for ferrying passengers across the river and transferring crew to ships. But according to Keith Webster, it could have been from anywhere:

Hi Chris
I did actually speak to one of the organisers back then. If I remember right his name was Len Saunders and I think he was involved with Felixtowe RC. Len told me that the skiff mould was actually found in a field & it wasn't clear what it originally was. I have a funny feeling that it may have been a hull mould for a broads sailing boat as the shape is very similar in style.
In the end some 13 were built and enjoyed quite a good racing circuit centred on Harwich, the Stour, Orwell and Deben rivers plus the Walton Backwaters.
It would seem that each skiff was owned by a separate small club but the circuit was organised basically by the two founders, when one of them died his mate tried to pass the baton on but nobody would help, And so the race series died out and the fleet became fragmented.
Cheers
Keith

Roy Alexander was one of the original Claydon rowers. He remembers the fabulous sensation of starting a race in a line of aggressively rowed skiffs:

Hi Chris,
My recollection is very sketchy, The Claytons were made by workers in the dock basin at Felixstowe who formed clubs and raised funds to have a former made and as more people became interested more skiffs were made off it. In their heyday there were more crews than boats.
The men raced first then the women, followed by the boys. Most of the men had very physical jobs: like Felixarc who were deep sea divers, tug boat crews, trawlermen. rugby players, coastguards, life boat men. I've been in a race with 15 starters and for the first half mile it was like a wall of water and foam, it was an amazing feeling all aches and pains gone the adrenalin running high.
Kind regards
Roy

Paul Norris rowed in a Felixarc Claydon that won the Great River Race back in the 1990s.

Hello, I was in the last Felixarc crew that raced and won the GRR; unfortunately the boat was sold soon after. Myself plus Dave Robinson (he was the one who broke the oar during a big ten) and our amazing cox are looking to buy a boat and bring the team back to the waters. Any knowledge of one for sale?

Does anyone know of a Claydon that is unloved, unrowed and possibly available? Let me know and I will get you in contact. Alternatively, I am told that a mould still exists, so new Claydons could be produced.

Posted by Chris Partridge at 10:36 No comments:

Down to the Harbour Mouth 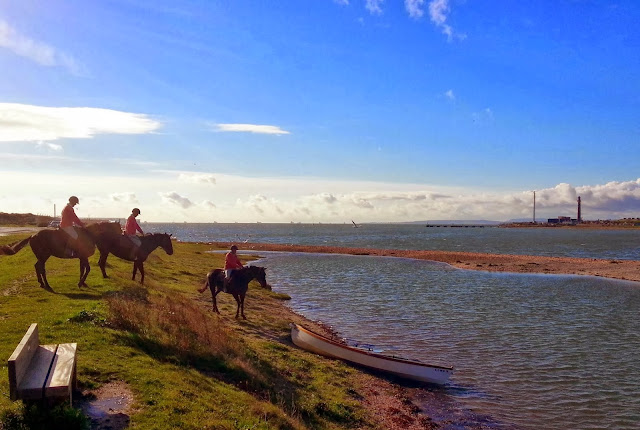 Another brief break in the stormy autumn weather this morning so I took Millie, one of our Teifi skiffs, to the mouth of Langstone Harbour and had a warming cup of coffee at the beach hut cafe.
As I was returning to the boat, a rider took his horse to water for a paddle in the sheltered water behind a sand spit, a clear photo opportunity.When I got home, I was surprised to find this image on my phone. It is a feature called 'auto-awesome' that detects a series of similar shots and combines them into an action shot.
Normally I'm not a fan of my phone doing stuff all by itself without my say-so but just this once the results are, while not quite awesome, at least pleasing.
On the horizon you can see a queue of ships waiting to take the tide up to Southampton.
The trip was a reminder of the need to consider the wind carefully before going out. It was a calm F2 when I left the Mill at 08.30, but the forecast was for windier conditions in the afternoon so I went upwind through Langstone Harbour. When I started out from the cafe it was blowing up considerably and I was blown back.
A lady member of the club took her own boat out but went downwind. She couldn't make headway coming back and had to abandon the boat on the foreshore near the coastal path. We will have to go along tomorrow and help her lift it back in.
Posted by Chris Partridge at 16:28 No comments: