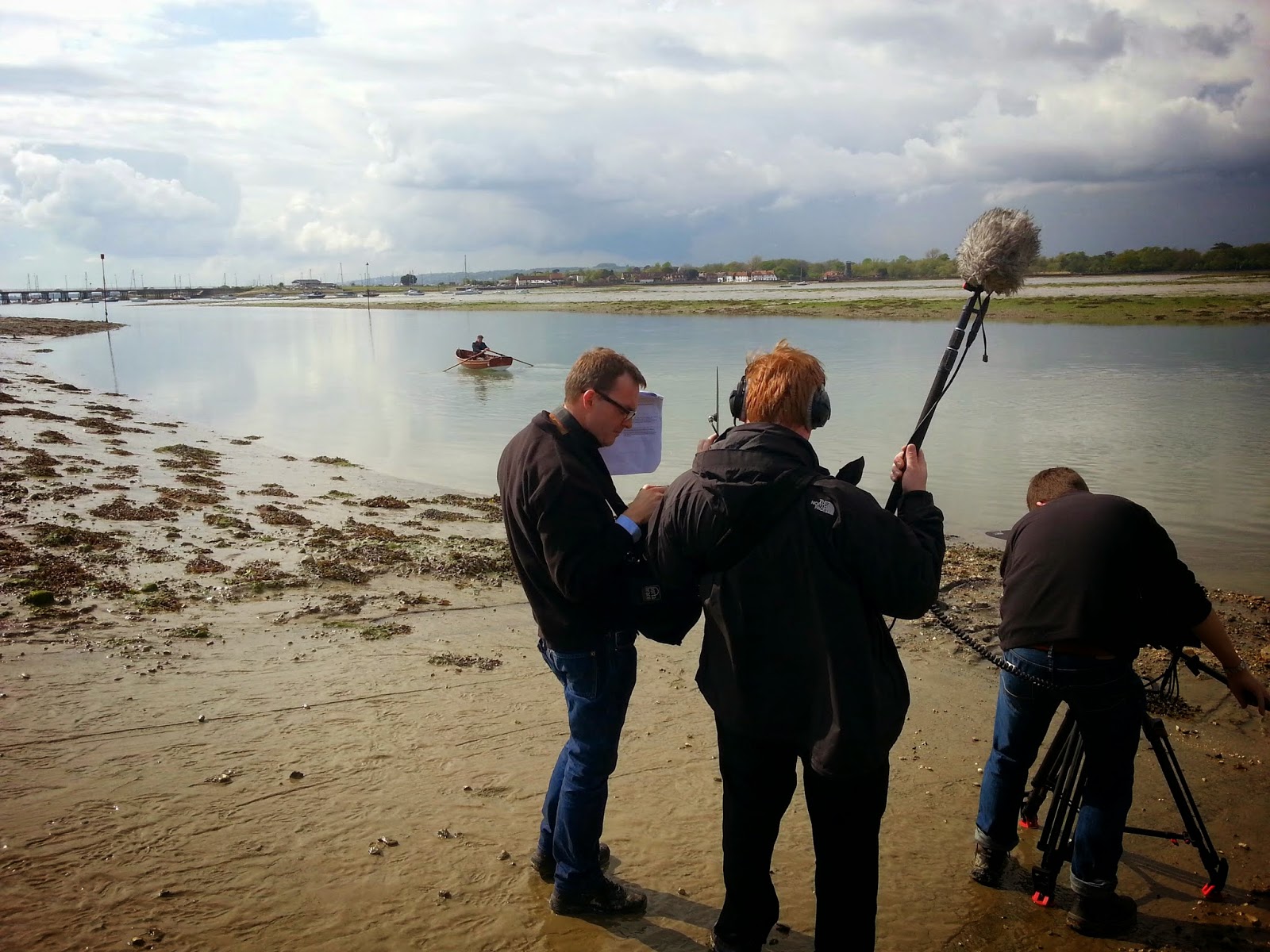 The BBC came to Langstone yesterday to shoot a clip for a documentary on D-day, planned to go out close to the 70th anniversary in June. They wanted a traditional rowing boat to illustrate just how exposed invaders were in amphibious operations such as Gallipoli in the first war, leading to the development of specialised landing craft for D-day.
The weather forecast had been dire, but when they turned up the clouds dispersed, the sun came out and all was fab. "The BBC forecast is always wrong," cried the BBC cameraman.
The presenter, Ben Cantrememberthename, asked the producer "Shall I row down that way and talk?"
I had to point out that if he did, he would have his back to the camera owing to rowers facing the wrong way.
"Oh, didn't realise that," from the entire crew. 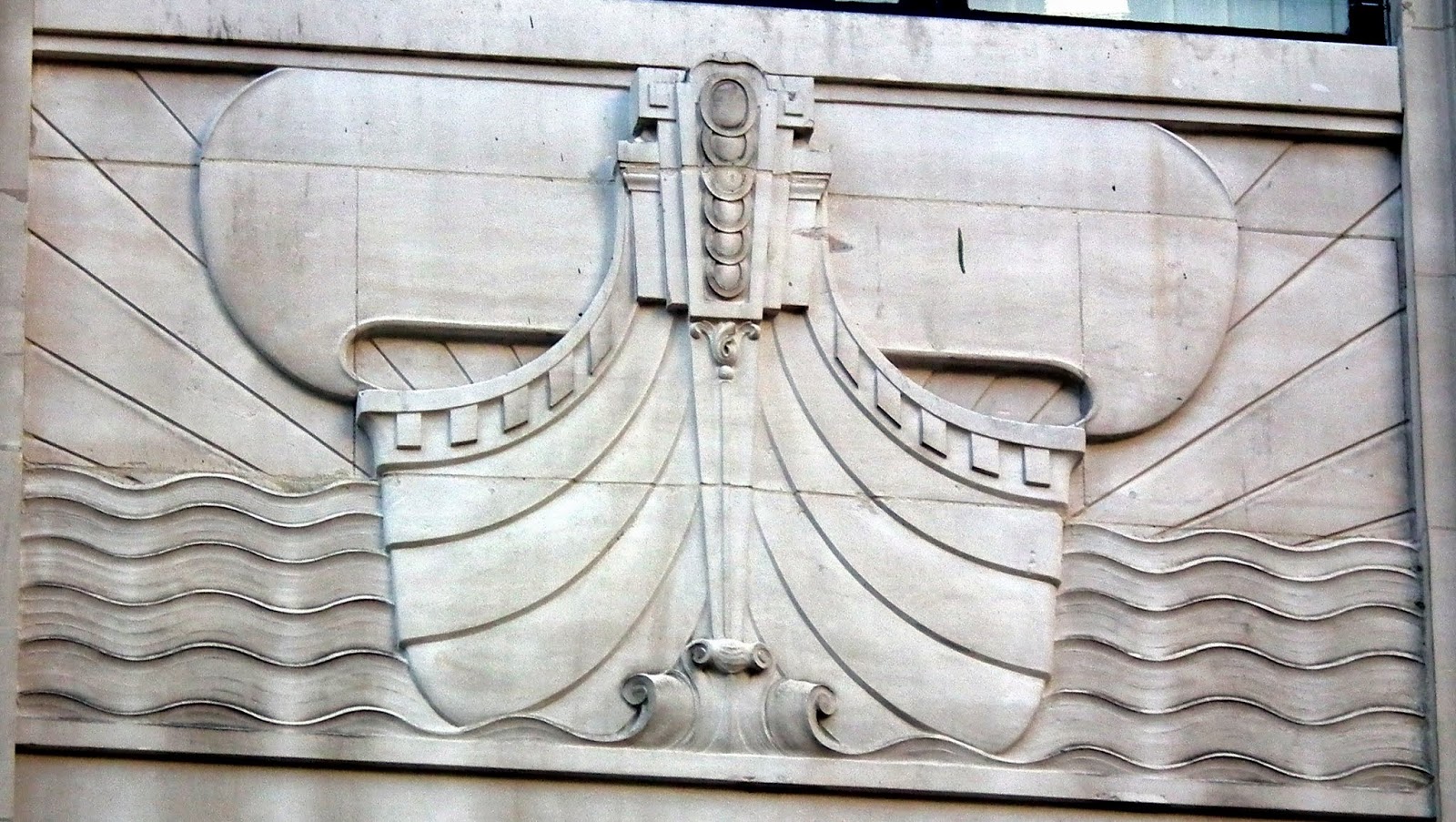 The office buildings round Lloyd's of London tend to be occupied by insurance companies who like to exhibit a bit of nautical swagger even though underwriters rarely go sailing as it is far too dangerous. This very odd-looking sailing ship is one of a series on the facade of a dull block in Fenchurch Avenue.
Question: Is she sailing east or west?
Posted by Chris Partridge at 20:57 13 comments: Links to this post 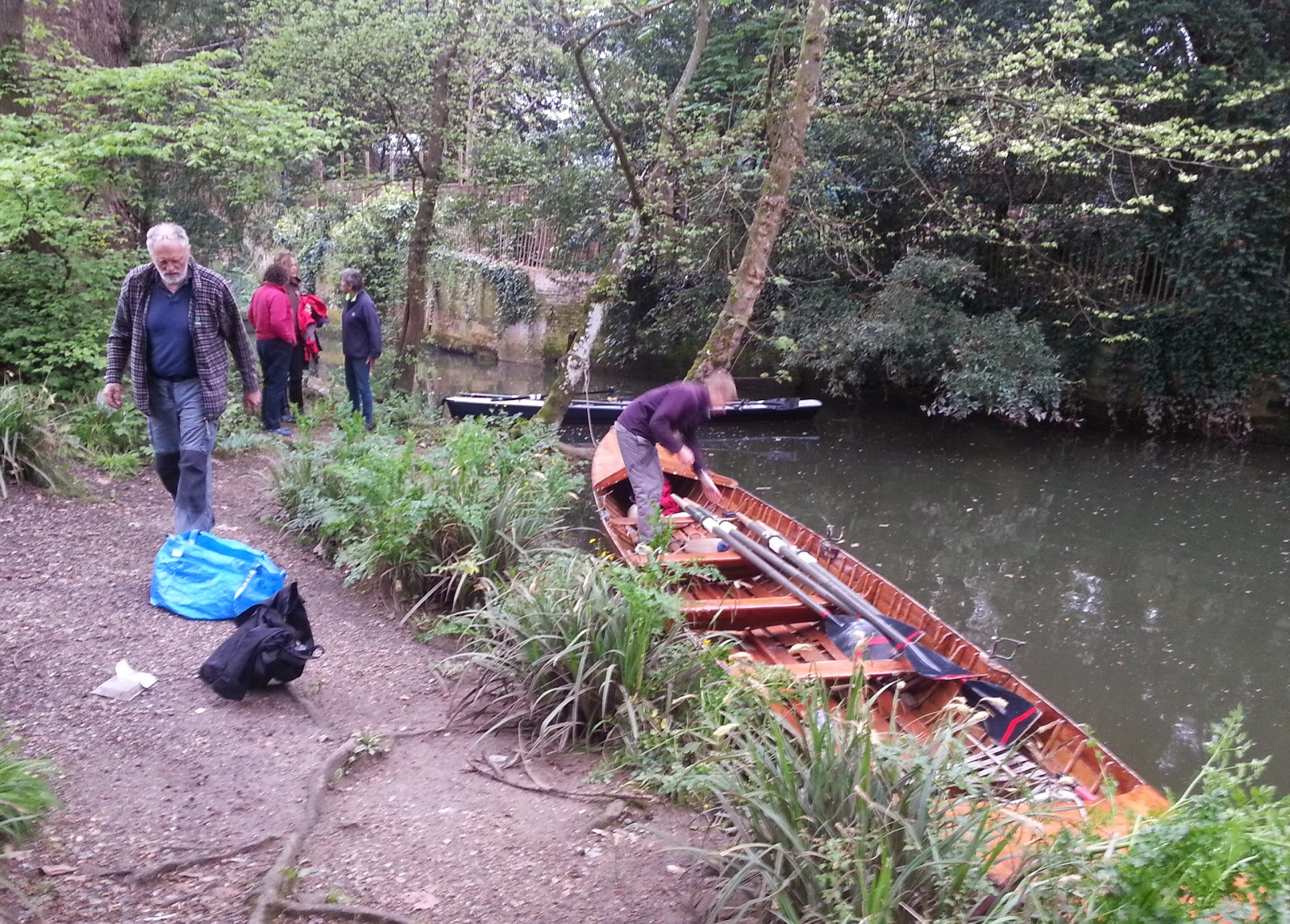 Went up the Hamble in the Solent galley Avery A again last night, with Philip Meakin (on left) coxing from the bow seat. This time, however, we had no paddles so over the narrow, winding last stretch to Botley we had to unship the oars and use them. Very unwieldy.
Nice curry, and returned with a cox (luxury) to get the boat out just as the light was going. It's so lovely being able to get out in the evening.
Posted by Chris Partridge at 20:30 No comments: Links to this post 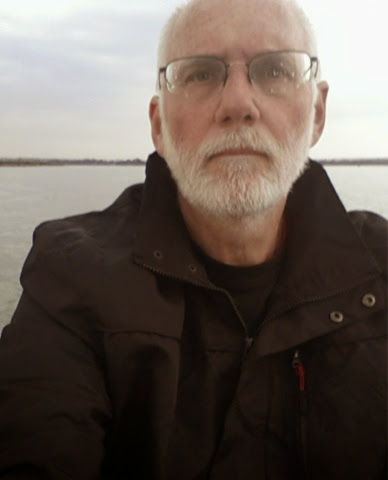 I've been betrayed by the BBC again. Yesterday, the Beeb weather forecast for this afternoon was a possibility of light rain. Today, it showed sunny spells so out I went in Kittiwake.
About 20min in it started to rain. Not very heavily but enough to allow a therapeutic round of cursing.
The upside, however, was that I was able to test my new wind/showerproof jacket. It has no lining, apart from a mesh, so it should be reasonably cool while keeping the wind and water at bay. And, joy of joys, it cost just SIXTEEN SOVS at Tesco. It worked perfectly hooray hooray.
So here's a selfie of me wearing the jacket and a strange grimace.

Posted by Chris Partridge at 19:55 4 comments: Links to this post 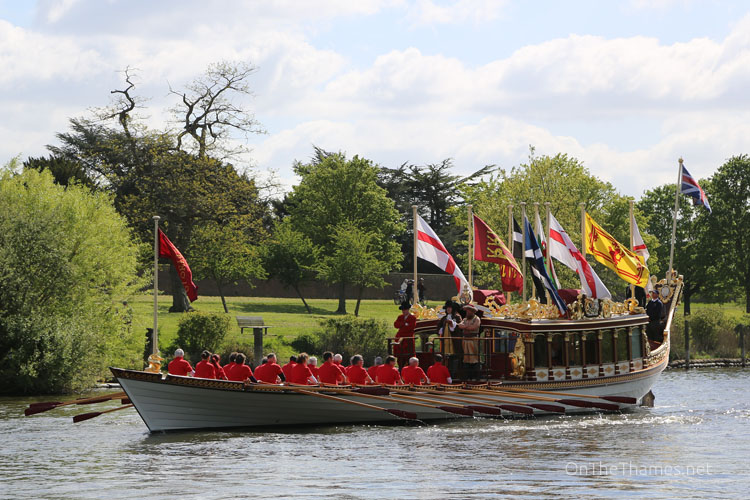 The Queen's Row Barge Gloriana is back on the water after her winter hibernation. Today she took HM King George I to his palace at Hampton Court, as part of a season of events about the Hanoverians.
Can't get enough of this. What a great sight.
Also can never resist a snigger at the words 'Hampton Court'. Will I never grow up?
Posted by Chris Partridge at 19:25 2 comments: Links to this post

I've been meaning to blog about this for so long I can no longer remember what tipped me off to Steve McColl's Cornish Skiff.
It was designed by Steve's dad Philip 'Murphy' McColl as a boat light enough to be launched and recovered single handed but tough enough to take anything the Cornish coast can dish out (within reason, natch).
She is 12ft long, grp with hardwood trims. The lines look familiar from the local flashboats. More info here.
Posted by Chris Partridge at 17:33 No comments: Links to this post 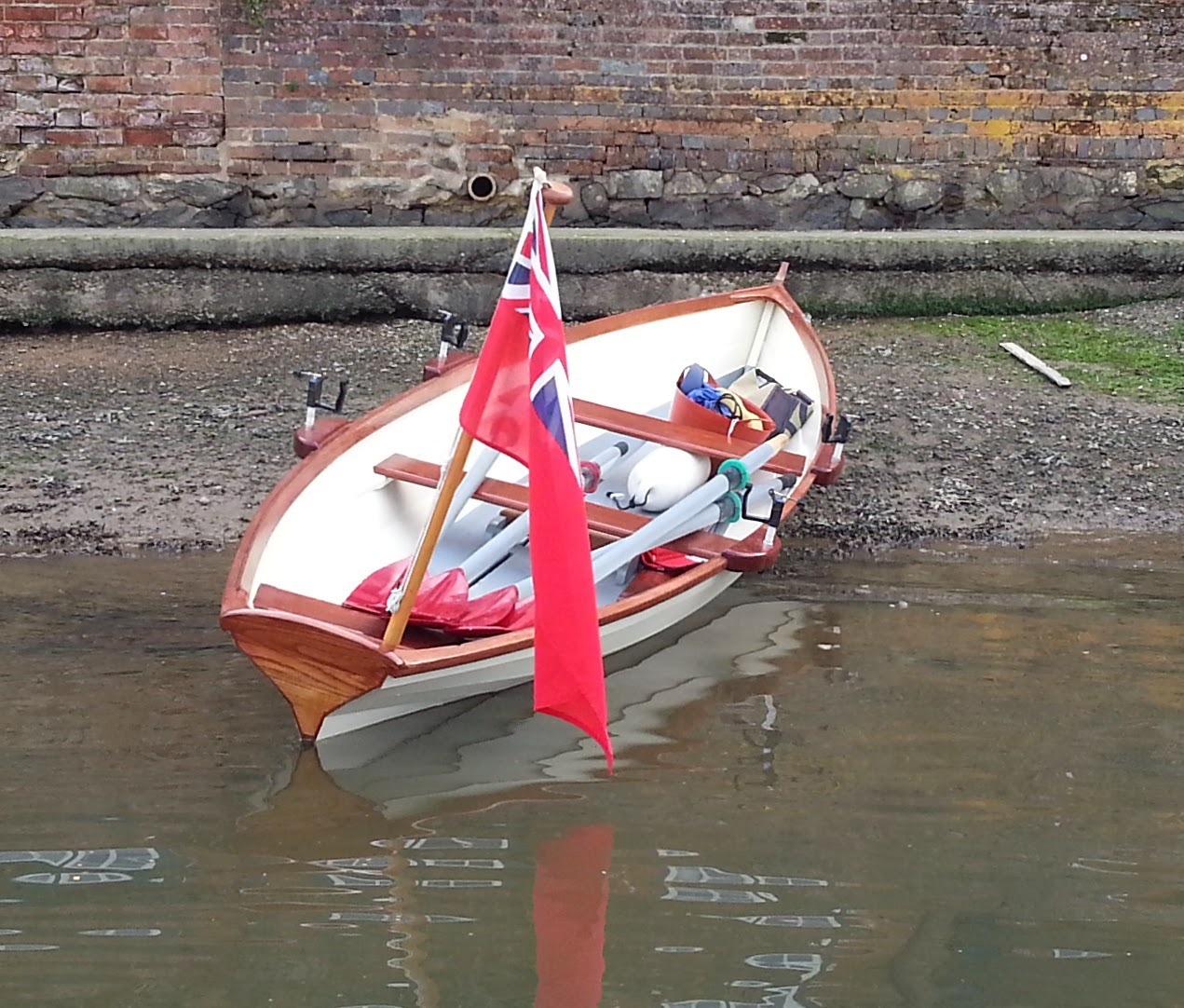 Hoorah for daylight saving! Suddenly evening rowing is feasible. Today I went out with the Hamble River Rowers in the Solent galley Avery A, and there was enough light to go all the way up to the Horse and Jockey, have a quick pint of London Pride and get back just as the light was finally going. 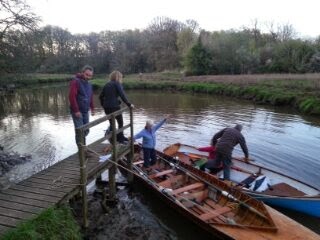 As we left, we spotted the Hands' family's new boat, bought to enable them to row double now the children are gradually flying the nest and a full crew for their Bursledon gig Mistress can't be found so often. She was rowed up from Hamble. Chris yelled from his comfortable position on the pub pontoon that she is built to the Mole design by Iain Oughtred. Very pretty and smart.
When we reached the H&J we found barely enough water to reach the top of the brook to their jetty, so neap was the tide. We had to take the rudder off to get the last few yards, and getting on and off the jetty was a perilous operation. I'm surprised no one had to row back sopping wet.
Posted by Chris Partridge at 22:18 No comments: Links to this post 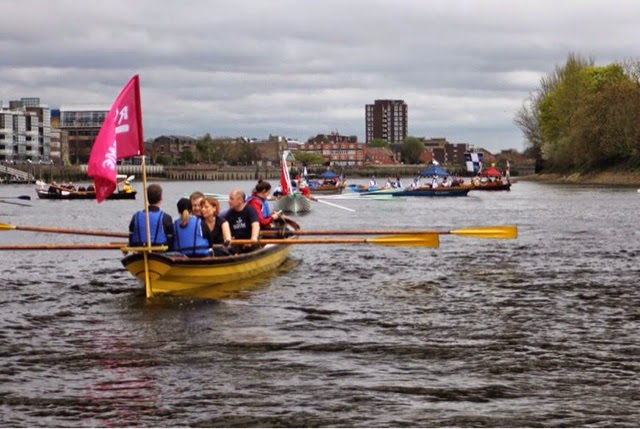 The Oxbridge Waterman's Challenge was held on the River Thames yesterday.
Boats in the colours of our ancient university towns raced as they used to, in lovely wooden boats with fixed seats. They were accompanied by Thames Waterman's Cutters dressed up as they used to, many with canopies for the passengers and flying flags. For more pics, see the Thames Traditional Rowing Association's Facebook page.
So much more fun than the rather dreary procession that occured later that day. 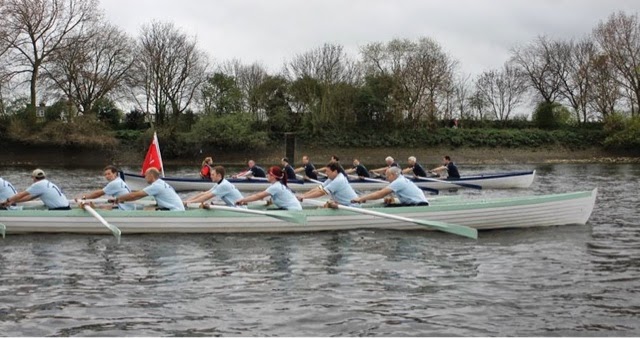 Every Home Should Have One

This is how Cameron Burton stores his Whitehall Spirit skiff. Neatly out of the way when not needed, but ready to be lowered onto her launching trolley at a moment's notice for walking to the nearby waterway. And very stylish to boot.
Cameron lives in the US but the house would not look out of place on the Thames. After the floods this winter, I would not be surprised to see boats slung on the sides of riverside homes from Lechlade to Teddington soon.
Posted by Chris Partridge at 18:01 2 comments: Links to this post

Currach in the West Country

Currachs seem to be all over suddenly. This magnificent example, pictured in the Western Daily Press, has just been launched in Minehead, pearl of the Bristol Channel and the place where my folks ran a hotel for many years.
The idea is to commemorate the arrival of Irish priests in currachs back in the Dark Ages, coming to bring the light of Christianity to the heathen locals. They had the best of intentions but if my memories of Saturday nights at the Wellington and other local venues are reliable, the long-term success of their civilising mission was rather limited.
The 28ft currach was built by Padraig O’Duinnin and Dave Nolan, boatbuilders from an organisation called Meitheal Mara - Gaelic for workmen of the sea. Here they are pictured in the local rag, the West Somerset Free Press (famous for the classic headline 'Jeremy Thorpe will not appear in court today')

The materials were mostly locally sourced, spruce and green oak from North Hill behind my parents' old hotel, and coppiced hazel from Dunster. Leather, still a major product of Somerset, was donated by a local firm.
The boat was built in just a week in a gazebo in the car park of the Beach Hotel, where it will form an exhibit in a museum of local life.
The boat will go in the water at least on the launch day, and the backers have expressed an ambition to row her to Ireland in a reversal of the usual direction of travel back in the 5th century. I hope she gets rowed regularly rather than just getting gawked at by grockles attracted into the museum because it is warm and dry, unlike the beach most days.
Steve Sagrott, formerly of Langstone Cutters, sent me the clips. Go on Steve - get her out on the water!
Posted by Chris Partridge at 19:29 1 comment: Links to this post

By an amazing coincidence, this picture was posted on Facebook today by the Great River Race. 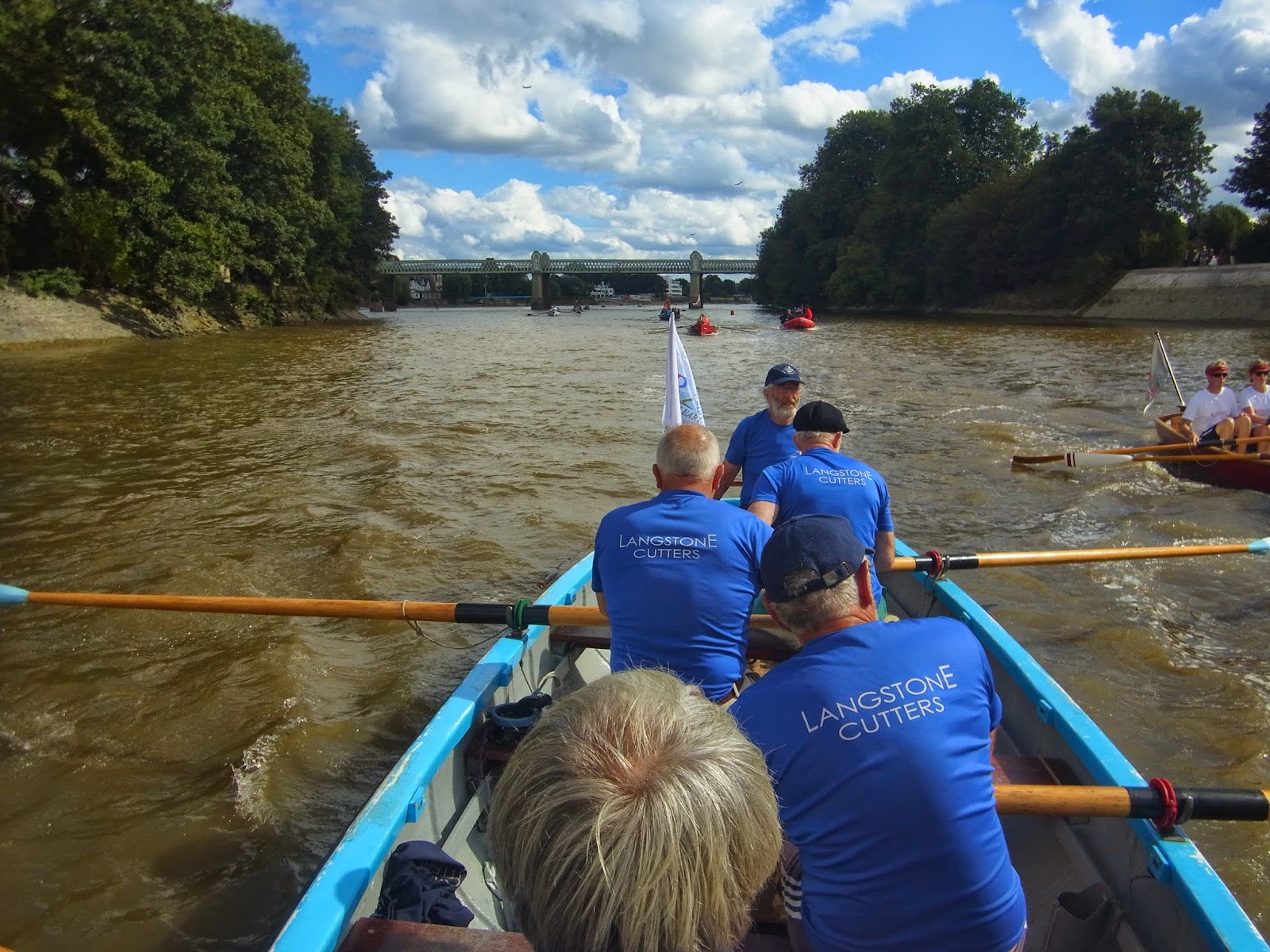 It is an Irish currach, Magical Merlin, starting 67th.
Which was right in front of the Langstone Cutters Supervets crew in Gladys, 68th.
Magical Merlin uses traditional sea oars. They finished 281st.
Gladys uses rowlocks. We finished 30th.
Of course, as I always point out, it's not about the boat, it's about the crew.
Just sayin'.
Posted by Chris Partridge at 23:06 No comments: Links to this post 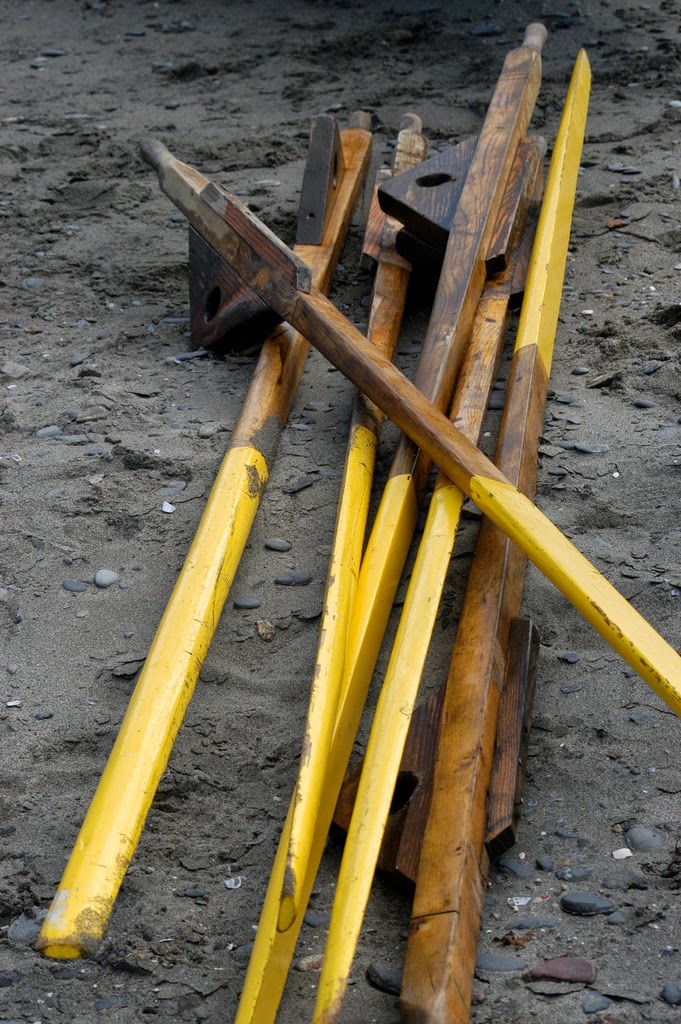 ...that Francois Vivier said that I didn't agree with. He likes the oars used in Irish currachs, like these ones. The hole in the flange goes through a thole pin, which keeps the oar nice and vertical but means you can't feather them.
Now feathering is an art and a pleasure, as well as reducing the windage on the blades on the recovery. Also, a feathered blade skims over the tips of the waves instead of clipping them and throwing water all over the crew. The old currach oars avoid that problem with slim blades that can't have much grip on the water.
And I suspect that the friction between the flange and the gunwale is quite significant and probably becomes a bit of a drag after an hour or two.
So give me rowlocks any day.
Though I must admit the currachs in the Great River Race go like stink...
Posted by Chris Partridge at 20:30 3 comments: Links to this post

Francois Vivier on rowing and sailing, and plywood Last Saturday I went to the AGM of the Dinghy Cruising Association, held at Warsash Sailing Club on the mouth of the Hamble. Noted French boat designer Francois Vivier gave a lecture and fascinating it was. Vivier was preaching to the converted, of course. Many DCA members sail his boats, including the president. And no fewer than three of those present want to build one, all coincidentally focusing on the Morbic 12, a 'sail and oar' boat. The one pictured right was made by Adrian Donovan, and one can see exactly why the others want one for themselves.
However, all the would-be builders are sailors rather than rowers, and I wouldn't really class the Morbic 12 as a row/sail boat even though it undoubtedly rows pretty well. I would like something longer and slippier, such as Vivier's Elorn (top of post). He said it is a combination of a Norwegian faering and an American peapod, with seaworthiness a main aim. She can be built as a pure rowing boat without centreboard, rig or rudder, but I think it would be a shame to lose the versatility of having the rig to keep you going when you want a rest and a brew.
I really liked Vivier's message that sail and oar forms a great combination of modes of propulsion so you can leave the beastly infernal combustion engine at home.
Vivier also discussed the vexed topic of plywood. Many builders are looking at alternatives to mahogany-faced boards ('gaboon' or 'okume') in view of recent well-aired quality issues. Vivier explained that African countries are now insisting that the veneers be cut from the log in the country of origin, rather than being shipped abroad and cut there. Quality has gone shooting downhill as a result.
Birch is an emerging alternative. Birch is grown in sustainable forests in Scandinavia and cut into veneers by conscientious and hard-working Finns, so quality is high. The only drawback, Vivier said, is that birch is not regarded as particularly highly rot-resistant.
However, Vivier was of the opinion that birch suffered because the wrong tests are applied, so he did some of his own involving dangling test pieces half in and half out of seawater for periods of months. Apparently it passed with flying colours.
The other drawback is that birch is up to 30 per cent heavier than gaboon. But I will certainly be considering birch for my punt project.
Posted by Chris Partridge at 21:28 1 comment: Links to this post