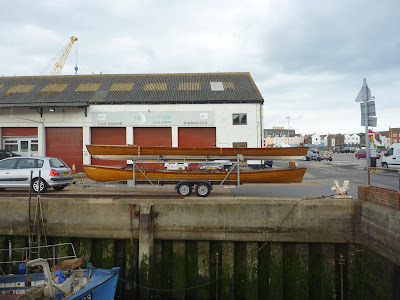 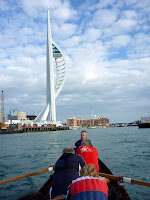 On Saturday evening, members of Langstone Cutters RC rowed the Solent Galley Bembridge from Portsmouth to her new home in Chichester Harbour.
The boat is part of the collection of the late Pat Sherwin, and is now on permanent loan to the Cutters from the Pat Sherwin Trust.
Bembridge was picked up at the slip in Old Portsmouth - that's her on the lower level of the trailer. Above is Doreen, which is going to another club. 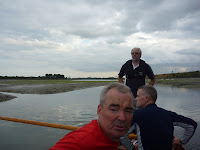 The long, light and elegant boat was carried down the slipway by the crew and launched into the rather intimidating waters of Portsmouth Harbour, where warships, cross-channel ferries and speeding ribs are frequent dangers. She seemed very close to the water, and a number of slightly alarming leaks were apparent - she has been out of the water for a while. She is also a bit tippy compared with the wide Clayton skiffs we are used to. 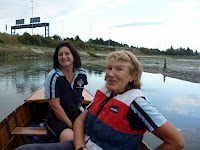 But she rowed beautifully, moving along almost without effort, and we soon became much more confident.
We rowed upharbour passed the Spinnaker Tower, the naval dockyard, HMS Victory and Whale Island. At the entrance to Hilsea Channel, which separates Portsea Island from the mainland, the tide was only beginning to fill and we had to row lightly through the narrow, meandering channel.
The light was fading as we approached Langstone. 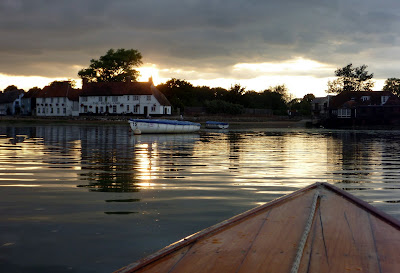 Posted by Chris Partridge at 09:04