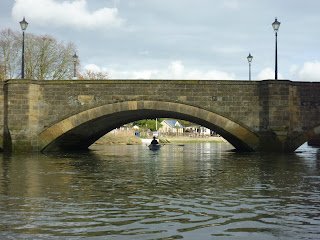 Today I rowed up the River Arun with Chris Waite, he in his self-designed and self-built skiff Octavia and me rather apologetically in my boughten skiff Snarleyow. Mind, I have done so much work on her over the years she feels self-built. Today I took out for the first time a pair of blades that I had taken back to the bare wood, glued where it had split and repainted. They looked very good but I suspect the paint is not as good as the price would have indicated.
I have rowed up the Arun from Littlehampton to Arundel before, but never beyond Arundel. The town seems to have turned its back on the river, and there are no easy places to launch.
Chris Waite took me to a point just south of the town where we could slide our boats down a rather alarmingly steep bank and into the water. There was a flat space just wide enough to plant a boot next to the water, so getting in the boat was a bit iffy, but I managed it without falling in (this time).
We rowed gently upstream, swept up by the tide. The picture above shows Chris shooting the rather narrow bridge at Arundel stern-first, so he could see where he was going. 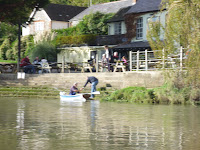 The river north of Arundel is lovely, in contrast to the dull line of flood defences to the south. The banks are reedy, and tree-lined hills sweep down to the river.
At the Black Rabbit pub, Chris asked the punters sitting on the bank for some butter to anoint his rowlocks.
We turned at the bridge at Amberley, where Chris met a friend of his who lives on a cabin cruiser. They park it at Amberley for the summer and retreat to the marina at Littlehampton for the winter, to avoid the floods. 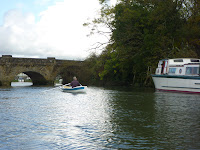 We had miscalculated the tides, so instead of hitting Amberley Bridge at the top and being lazily swept back down on the ebb, we had to fight our way back against both tide and wind. Good exercise, but we were back later than we expected after our round trip of about 12 miles. The sun was sinking on the horizon when we got back to Arundel Castle, owned by the same family since 1138.
We took the boats out on the new pontoon just below Arundel Bridge just after five, and the bloke who runs it came out to admire the boats and say he was not going to charge us. What a nice guy.
The scandalous lack of any place to launch a boat in Arundel may be supplied soon. The Duke may be making a site for a slipway available close to the castle car park. If it comes to pass, it will be absolutely wonderful to be able to row this lovely river without risking an involuntary bath. 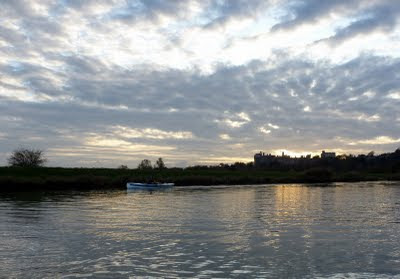 Posted by Chris Partridge at 21:32