Up the Hamble with the HBBR 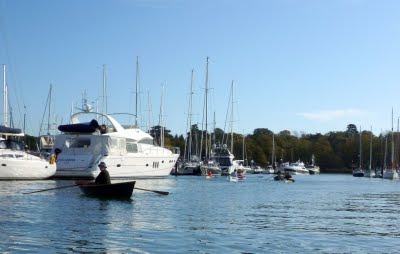 It's so wonderful to get another sunsoaked Saturday in a generally rainy week. A squadron of the Home Built Boat Rabble (as Chris Waite unkindly called us) set out from Swanwick hard midmorning and headed up the Hamble.
To the left is Chris Adeney in his Woods-designed Linnet skiff Pelly, the sister of the Bee that I have under construction (well, I have the plywood stacked up in the shed). Following on are Dr Waite in Octavia, Max Taylor in Gato Negro and Tim O'Connor in his Chesapeake kayak Wot Four. 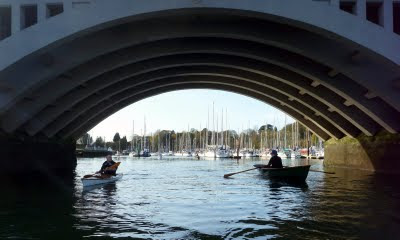 Tim and Chris A exchange banter passing under the A27 bridge.
I put on a bit of pressure after the bridge and to my alarm the port side rigger broke away from the gunwale. A wing nut holding it to the hull had worked off on the road, leaving one arm of the rigger virtually waving in the wind. I had to ease off to avoid the whole thing coming apart. 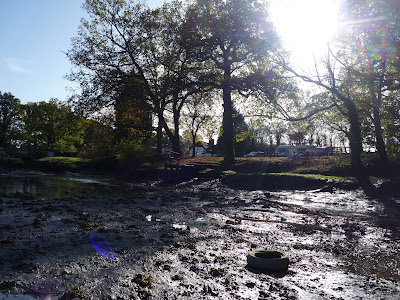 We arrived a bit early at the creek up to the Horse and Jockey in Curbridge, so we floated gently up on the tide until the mud was covered (note traditional British car tyre).
Then we hung around outside the pub door, which remained sternly closed despite being past noon on a sunny Saturday. Eventually a bloke came round to announce that due to blah blah they would not be opening until one, and that due to blah blah blah the kitchen would not be open until the evening.
That was inexcusable. They knew we were coming, and while we were waiting several people arrived and left again. Is the landlord just lazy or was the entire staff crippled by hangovers? Avoid the Horse and Jockey, Curbridge, Hampshire, is my advice. I won't be going back. 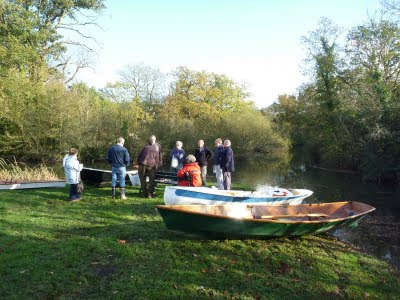 We re-embarked and paddled off to Botley, where there is a lovely green at the old quay. Up to Victorian times this was a bustling port but now it is a quiet backwater and a lovely place for a picnic. Expeditions to the town secured supplies of sandwiches, beer, wine and double chocolate cookies (thanks, Chris A!).
I even managed to get a wing nut and washers to keep the rigger in one piece. 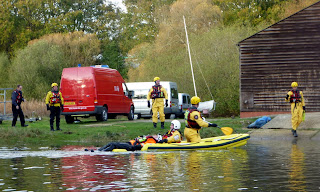 On the way down I paused to watch Hampshire firefighters practicing shallow-water rescue drill, for rivers and floods. They were using this interesting little inflatable, fitted with a skirt behind so rescuees can be hauled aboard easily and without causing more injuries. 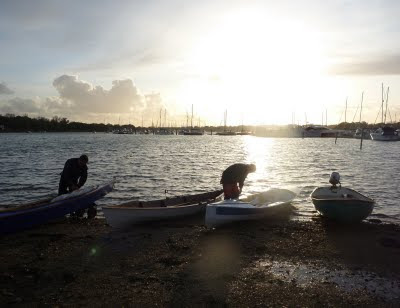 Back down, the tide was still standing due to the famous Southampton double high tide. We got back at 4 and the light was going fast. Here are Graham Neil packing up his kayak Polythene Pam, with Snarleyow, Octavia and Steve and Marg Brown's nice little Petite Brise Penny.
Also present were Phil Oxborrow and Gem with their Prospector canoe Tonawanda and Al Law in his 8ft pram Newt. 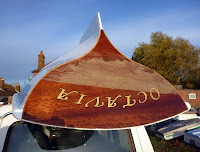 Tailpiece: Comments were made on the Hamble's general muddiness. They weren't wrong.

More on this event on Max Taylor's Burseldon Blog.
Posted by Chris Partridge at 11:07