The local history museum in Havant, just up the road from me, has this formidable 9ft long duck gun propped up against a wall.

It was made some time in the 1890s by James Pycroft, a member of a large family of farmers, builders and sailors on Hayling Island. James himself worked as a fitter in the naval dockyard at Portsmouth, so he had access to the machinery to make duck guns properly - a great many wildfowlers must have been killed by their weapons over the years. This one even had a breech loading mechanism, which the museum is trying to locate. James built this particular gun for his brother Harold (pictured), who built several punts of larch, sitka spruce, deal and parana pine. According to Harold's son Noel, the gun would be loaded with 2lb of BB shot for Brent geese or No1 shot for widgeon, duck and teal. Blasting powder provided the propellant. 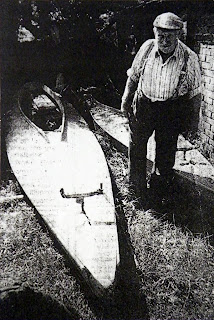 Harold and his brother Albert shot 3,000 Brent geese over the bitterly cold winter of 1939/40, which were sent to a game merchant in London. Noel recalls being sent out onto the mud looking for barleycorns mixed up in the bird poo - apparently, seabirds cannot digest barley so this would be an excellent indication of where they were roosting. A dawn raid would then be mounted.

This picture is interesting for two reasons. One is that the punts seem to be in more ice than I have ever seen in the harbour. The other is that they are fitted with outriggers, presumably to make rowing to the killing ground a bit faster. The final approach would have been made by running one of the oars back over the transom and sculling. 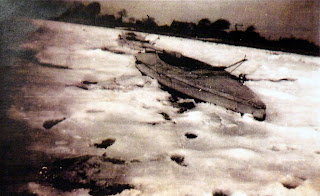 Many thanks to the curator at Havant Museum for pointing me to the right records, and for permission to take the pictures.
Posted by Chris Partridge at 18:07

Hi Chris, you may already have these links to the West Mersea Duck Punts

and some nice pictures of the Duck Punts racing under oars and umder sail at the West Mersea Regatta.

It's great that plans are now becoming available for thse Duck Punts.

Showing my age, I remember a couple of duck punts still in use from Emsworth, and I have a photo - to be located today ! - of them afloat, but without the guns mounted. I never actually saw the guns being fired. I hate to think of the tons of lead that must cover a lot of Chi Harbour. Even in France they have now banned lead shot as it was killing more birds by poisoning, rather than by direct hits, as has happened here re swans ingesting fishermen's weights.

Hi Chris,
I think there is still one punt active in Chichester. Met man, punt and gun launching about 4 years ago on Christmas eve, off to get his Christmas lunch.......

Brian - I have been meaning to post on the West Mersea Duck Punts, thanks for the reminder!
Peter - do send the pic over if you find it, it would be really interesting.
Nick - I spotted a duck punt at Itchenor a couple of years ago (see http://rowingforpleasure.blogspot.com/2008/04/chichester-duck-punt.html) but it seems to have disappeared. Was your guy using a traditional gun or a shotgun, which most American wildfowlers seem to use these days?
And when will Ocean Pearl get back on the water?

Hi Chris,
He was using the proper gun, which was in his Landrover. The muzzle was hard on the windscreen and the butt was hard on the back door.....
I think he comes from Emsworth, but I havn't seen him since. I was suprised to see it 'in use'. It had an aft support for the gun on a screw thread which was operated by a fan belt running to an idler. The angle of the gun could be silently adjusted.......
It had remains of bood and feathers inside, an aluminium mast and modern sail for down wind. A notch in the stem carried a hemp rope which went aft to each side of the gun. This absorbed some of the recoil.

Ocean Pearl will be back on her mooring around the end of March. This year I PROMISE to get you out for a sail!

PS. It was not the one at Itchenor, which looks like an extended Fireball!
This one was narrow and double-ended.

A taster for an Ocean Pearl Sail can be endured at....
http://www.youtube.com/watch?v=Dpbc3ghTmZk