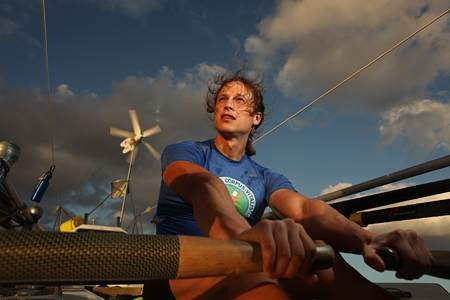 It's the season for transatlantic madness again. A procession of boats is struggling from Africa to America, driven by oars, willpower and the Trade Winds. 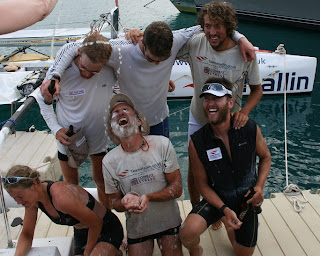 Recently, Team Hallin (right, celebrating on arrival) crossed the pond in a world record time of just under 32 days, an average speed of 3.4mph.
They had just enough time for some reviving champagne and for crew member Chris Covey to propose to his waiting girlfriend Susie Easton, surprising her with a ring he had carried with him for the whole voyage. Then rival Sara G arrived, having rowed a slightly longer course but at an average of 3.9mph, so setting a new world record not 12 hours later (that's photographer Fiann Paul in Sara G in the dramatic photo).
Technical details on the truly dreadful website of the Ocean Rowing Society. Team Hallin raised money for the armed forces charity Combat Stress.
Posted by Chris Partridge at 20:50

I see what you mean. Truly dreadful website indeed. It has writing on top of other writing all over it! I couldn't do that if I tried.

ROWING across one ocean and breaking two world records is not enough for one skipper.

Matt Craughwell, 32, who grew up in Northolt, broke the record for fastest rowing boat to cross the Atlantic Ocean last Tuesday. After being home for less than a day, he was already planning to take on the Indian Ocean next year - and the Pacific after that.

The athlete, who rowed 3,170 miles from Morocco to Barbados in 33 days 21 hours and 46 minutes with five team mates, shaved 10 hours off the time achieved by Team Hallin,

But it wasn't all plain sailing; Matt told how the crew suffered severe hallucinations due to sleep deprivation while rowing 12 hours a day.

He said: "I came round and the lads were laughing. I had dropped my oars and for three minutes I was whistling for my dog to come back. I didn't remember anything. It freaks you out. It's just like that film Inception, all of a sudden it starts to crumble.

"But after a week the body kicks in and you just endure it. It's incredible what the body is capable of."

Living with five other men on board the cramped 11-metre Sara G, which has three sleeping spaces, was fun as

well as gruelling, the skipper said.

He added: "One guy will be sleeping, sweating all over the bed, and then you'll come in with your really sweaty T-shirt. It's grim, you wouldn't keep animals in there. But, after three days, you give up caring, you need to sleep so much.

"But it's an incredible experience, I've come away with five brand new friends. I know the ins and outs of their whole background, their childhood, their family stories. We say what goes on board stays on board."

Matt's first record attempt last year ended in disaster when the boat had to be abandoned, but the self-confessed rowing addict thinks it was fate.

"I was devastated. But then I think, if we had got across, would I be here now as the world record skipper?

"There's 400 ocean rowers in the world, and that's a pretty elite group to be a part of. But then to be the fastest man, that hasn't sunk in yet.

"Now I've got that belief in myself. There's three oceans out there. I want to be the fastest on all three of them. It's addictive."

Matt was invited to a National Geographic Society meeting on Thursday in central London with Ben Fogle, whose documentary on ocean rowing first inspired the ex-engineer, who lives with his wife Helen in Hertfordshire.

In last week's Gazette, we reported that Matt's team were beaten

to the record by another team, when in fact it does hold the current world record for fastest boat rowed across the Atlantic.