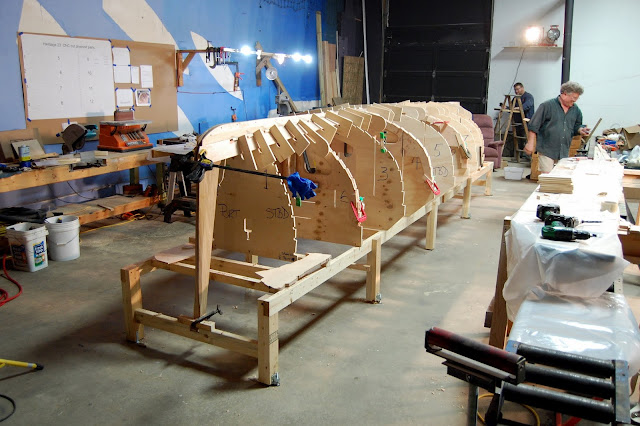 The only thing that was missing was a sail rig, which they provided together with a centreboard. The Mackinaw boat was the workhorse of fur trade until the mid-nineteenth century, and was adapted as a fishing boat until refrigeration meant that the fishing business went to larger vessels.
Very few Mackinaw boats survive, but they may be set for a come-back. Heritage Coast Sailing and Rowing, a non-profit organisation, have commissioned a design from Richard Pierce and Alec developed a kit for it.
The boat is built of epoxy ply, 23ft long and, as with the St Ayles Skiff, is intended for construction by amateurs. The hope is that the boat will stimulate village boat construction projects up the lake shore.
The design has the advantage that it can be sailed as well as rowed - this could lead to some interesting regattas if courses can be devised that encourage participants to use both oars and sails.
Follow progress of the first Heritage 23 here.
Posted by Chris Partridge at 21:35

Good find! I'm excited to hear about this idea of "community rowing". Some clubs just seem to develop exclusivity and a "do it our way" attitude.