Another river conquered by the St Ayles Skiff 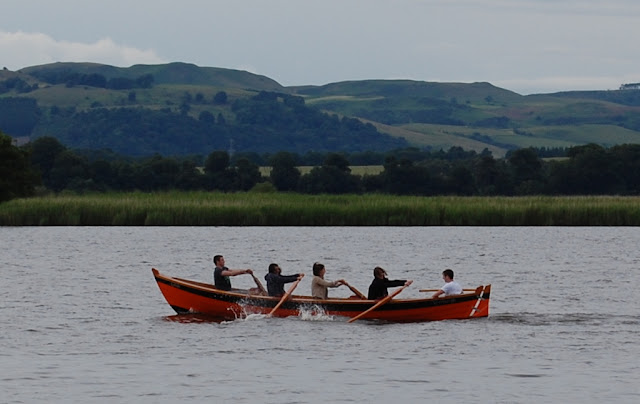 The St Ayles Skiff phenomenon has hit the silv'ry Tay, with the launch of Glide. She was built by a team of lads directed by Sam Marshall for the Newburgh Rowing Club.
The girl at stroke is really giving it some welly - look at the bend on that oar. Mind you, I am told the oars are made of larch rather than (ideally) spruce so they must be a bit whippy. 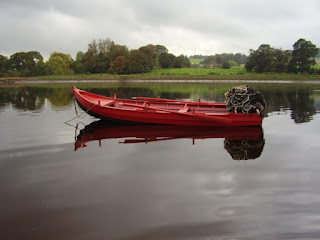 Newburgh used to be home to a fleet of Tay salmon cobles, used to net salmon in the estuary and vigorously raced at a summer regatta.
In 1996 the riparian owners upstream, keen to protect stocks for their very profitable fly-fishers, bought out the rights and salmon netting at Newburgh ended - the one shown in the picture is operated for tourists by the Tay Salmon Fisheries Company.
The locals wanted to preserve links to the past, however, and built four reproduction salmon cobles in grp to continue the fishermen's annual rowing races. Now the event is a central part of the Newburgh Highland Games (sadly cancelled this year because of the appalling so-called summer).
Now rowing in the St Ayles Skiff looks set to continue year-round - another is already under construction.

Posted by Chris Partridge at 10:44