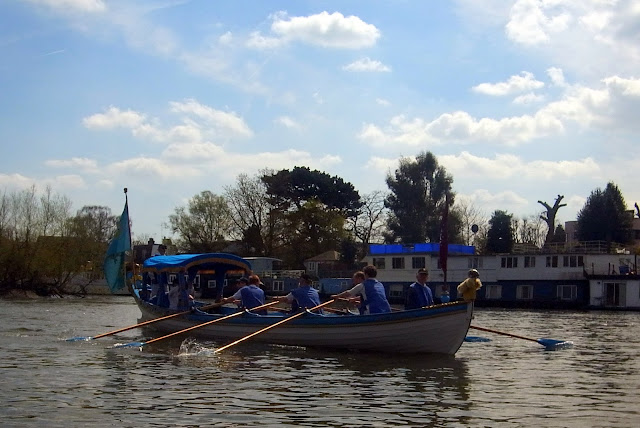 One of the stars of the Tudor Pull was Royal Thamesis, the barge of the Drapers' Company. Until the 18th century the livery companies of London, successors to the medieval craft guilds, all kept their own boats to transport officials and make a statement at the annual Lord Mayor's Show which at that time was held on the river. The Lord Mayor's barge was particularly lavish as you might expect.
The Drapers' Company decided to buy Royal Thamesis in 2003, 182 years after their previous barge was disposed of. It's not clear why they felt the need for a new one, but here are some facts:
1) Royal Thamesis was purchased from a rowing club in Oxford called City Barge;
2) The founder of City Barge was Richard Norton; and
3) Richard Norton was a Liveryman of the Drapers' Company.
So it seems they bought her just for fun and that is the best reason there is.
Royal Thamesis is a replica of Queen Mary's shallop, built in 1689 and which survived in irregular use until 1919 when she appeared at a pageant celebrating the end of the First World War. What an incredible length of service. She is now in the National Maritime Museum in Greenwich.
The replica was built by Michael Dennett in 1996. She is 36ft long and has eight rowing stations, though only six were occupied on the Tudor Pull. There is room for six passengers under the canopy.
Posted by Chris Partridge at 21:59

And there's me thinking the Tudor Pull was a medieval chat up line!