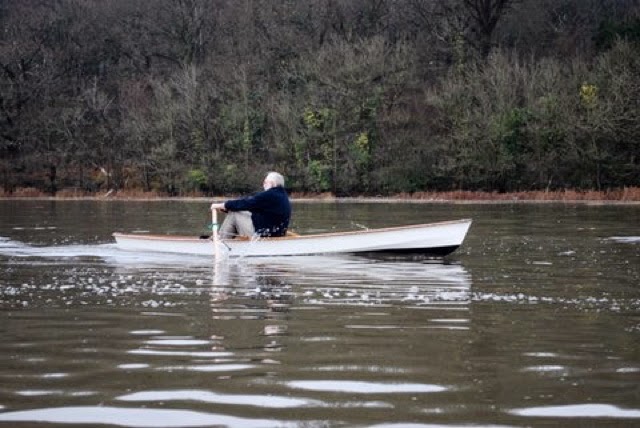 I've got a new job, thanks for your concern, and I've been rowing a lot, and restoring my grandmother's old boat so it has been a busy time.
The big news this week is that Alec Jordan of Jordan Boats is going to make kits for one of my favourite sliding seat sculls, the Chippendale Sprite. That's me in my Sprite Snarleyow hammering up the Hamble in 2008, and she is up there ^ at the top of the screen too.
The late Jack Chippendale designed the Sprite with Andrew Wolstenholme. Andrew tells me the design process was a bit of an odd one because the way the hull is made (by sewing the bottom planks together along the keel and then folding them apart over the frames) makes it impossible to generate the shapes on a computer.
The result, however, is a super-light hull that is easy to build, goes like a train but has enough volume and freeboard to take out in quite aggressive conditions. Her only vice is a tendency to hobby-horse as the weight of the rower shifts along the slides - see how the bow sticks up in the photo. But, of course, the rower is <ahem> heavier than average.
Ted Bird continued to supply kits and develop the design when he bought Jack's business but the current owners seem to be more into furniture these days and the kits have not been available for a while.
So I was delighted when Alec rang to say he is about to add the Sprite to his range, and it is advertised in the new edition of Water Craft.
Let's hope Alec makes the double version, Otter, available too. I rather fancy the idea of fitting out an Otter as a fixed seat single - at 19ft and very light she would be fast and seaworthy. Ideal for bashing round the Solent.
Posted by Chris Partridge at 09:51

Nice - like you say the 19 foot version would be a good single. I've been pondering Ken Basset's Liz design with a sliding seat or Dave gentry;s ruth, not that I have any time for boat building at the moment

I have been rowing a Liz on Westport Harbor, MA for about 5-6 years. Responsive, glides, and tracks true. A true pleasure.

Hi Jim...I really like the looks of Liz. Got any pics?

Very glad to hear that news - probably the best little lightweight boat around. What about the stainless steel outriggers though?

Alec Jordan comments:
Hi Jim. I am planning on finding someone to fabricate the riggers. Fortunately I still have the riggers from my Sprite (which incidentally was what got me into this business in the first place).