Home of the Solent galley 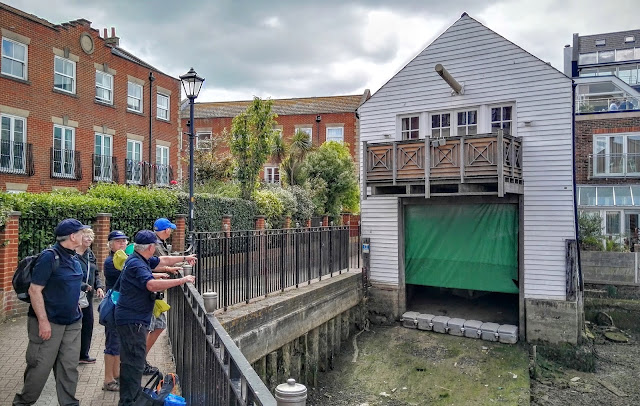 On Thursday, to Portsmouth with members of Langstone Cutters RC to see the parade of sail that kicked off the America's Cup event. It was very dull. We weren't allowed to take our picnic into the arena because our surface-to-air Scotch eggs and depleted uranium stuffed olives were a security risk apparently. 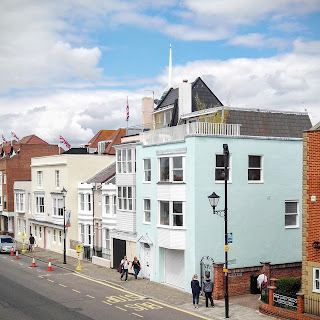 So we went to the beach next to Clarence Pier (scene of the last fatal duel in England) and watched the boats go by. I had been expecting a fleet, but all we got were the contestants themselves (impressive), a frigate (seen them before) and a couple of historic motor boats. And a whole bunch of ribs. So for me the highlight of the day was passing George Feltham's yard in Old Portsmouth, for it was here that our Solent galleys Bembridge and Sallyport were built back in 1961. It is possible that Langstone Lady was built there too, probably before the War, but the records have been lost.
Keith Feltham, George's grandson, remembers the yard in its heyday:

My earliest memories are of 'whalers' being built for the Admiralty during World War 2. These were clinker-built boats designed to be propelled by oars or sails and were 27 ft. long. I can remember them being built in the loft of the workshop and, when complete, being lowered into the water from the gantry which can still be seen projecting above the upper doors overlooking the top of the Camber - an operation which must have been hazardous and would not, I am sure, be acceptable to the Health and Safety Executive today!
Larger boats were constructed in the ground floor accommodation where the concrete floor was able to withstand the heavier loads and from which launching was easier although, from my recollection it was never straightforward.
It is easy to forget that power tools, which are used for everything these days, were generally not available fifty or more years ago and the majority of the work was done by hand. There was a circular saw for cutting large sections of timber and there was a band saw, powered from the same electric motor by a series of leather belts over flat rimmed drive wheels, for cutting more intricate shapes. Apart from these, most work was done by adze, hand-saw, plane etc, and the hole through the keel for the stern tube for the propeller shaft was drilled using an auger. A very different situation from today when there is a power tool available for most operations!
Boat-building at Point gradually faded out. I believe that A.W. Clemens was the first firm to go, apart from J.D. Feltham, of course, who died in 1917. Harry Feltham died while sailing in a Victory boat during an evening race in 1958. (The Victories are the 20 ft. black-hulled boats which still have a strong following in Portsmouth and can be seen regularly racing in the Solent.) George died in 1975 and then his business was closed down and my father retired. Stan carried on for a few years after this but now there are no boat-builders left on Point.

Posted by Chris Partridge at 21:28

The 27' Montague Whaler was the Royal Navy's ship's boat for the longest time.

Eventually replaced by the 3-in-1 (Oar, Sail and Motor), itself superceded now by the RIB; the whaler was lowered and raised manually on davits by jolly jack tars hauling on heavy duty block and tackle -

The order for two separate teams to bring the fore and aft tackles together in order to lower or raise the boat while keeping it horizontal; there would have been no problem lowering them from a loft. Wonderful boats that I have sailed and rowed in my youth, whenever that was.

And if you ply me with sufficient booze one fine Cobnor, I'll sing you a song (badly) of the Montague Whaler, what was written by an old naval friend of mine

Those were the days