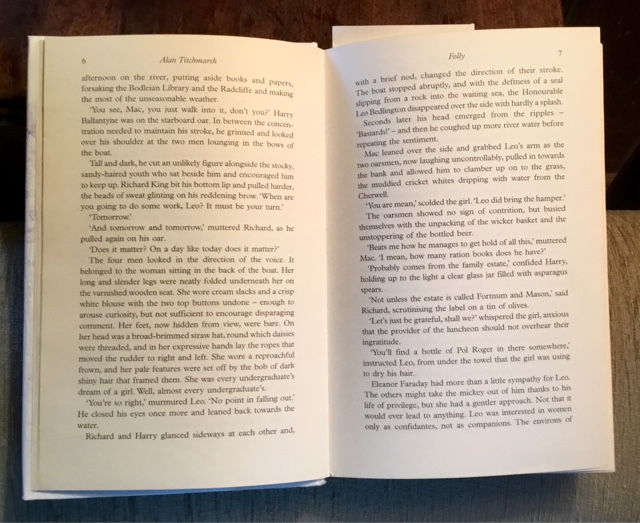 My book group has chosen Folly by green-fingered TV talking head Alan Titchmarsh for this month's read. Not my sort of thing as a rule so I was pleasantly surprised to find Chapter 2 opening with a glowing description of a group of friends rowing down the river at Oxford on a perfect April day in 1949.
It starts purple: "The long trails of willow wands were still unblemished by summer breezes and they sketched evenescent patterns on the water as the freshly varnished rowing boat nudged its way forward beneath them."
Two chums sit 'in the sharp end of the boat', Leo Bedlington reclining, trailing his hand in the water, John Macready sitting with his elbows on his knees. A beautiful girl sits "in the back of the boat."
"Harry Ballantine was on the starboard oar...alongside the stocky, sandy-haired youth who sat beside him and encouraged him to keep up."
Eh? What sort of boat is this? Two rowers side by side, each with an oar? I learned to row not far from Oxford and not so much later than 1949 and I have never seen any skiff beamy enough to allow more than one oarsman on a thwart (tell me if I am wrong).
What happens next is even more extraordinary.
"[The rowers] glanced sideways at each other and, with a brief nod, changed the direction of their stroke. The boat stopped abruptly, and with the deftness of a seal slipping from a rock into the waiting sea, the Honourable Leo Bedlington disappeared over the side with hardly a splash."
What larks!
But how did they manage to tip a man lying in the boat over the side simply by backwatering? He would have to be standing in the bow like a human figurehead.
Clearly Titchmarsh had limited time off from his talk show for research, so it came as no surprise to find the Hon Leo Bedlington describing himself as a 'Hooray Henry' a few pages on. In 1949? The phrase was unknown until the 1980s, according to Google N-Gram. Careless.
Posted by Chris Partridge at 11:33

Careful... my other hobby is wargaming, and we've been known to talk for hours in the pub about how realistic the depiction of the Stug IV Ausf. G (Google is your friend) in 'Saving Ryan's Privates' was.. :o))

It's always a danger, getting boringly technical about your pet subject. But I got this red mist, see...

Maybe our new chum Leo Bedlington had had more than a few more Pimms than he ought? Alternatively, it might be consistent with the text that he intentionally slipped in so he could have that Darcy "wet shirt fresh from a lake dive" look to impress the beautiful girl and that his cries of "bastards" might be to get her sympathy, the cad?

An interesting theory, JP, but it later transpires that although Leo is flamboyant enough to commit such a gesture his also gay. All the other blokes are in love with her, however, so wet shirt stunts will gain him nothing, sadly.

The same sort of literary / poetic "license" is taken in films. I laughed out loud when I viewed the storm scenes in 'Master and Commander' which shows a fully canvassed square rigger sailing in 60 knots + , all shown in slow motion for dramatic effect.In reality, with that amount of canvas up the boat would have capsized much sooner.

Perhaps the author is relying too much on the readers imagination; maybe Leo was showing off by reclining on the gunwale trailing one hand in the water, a balancing act that would have been upset by a reverse oaring maneuver? - My guess is that the author doesn't generally know anything about boats and specifically nothing about the physics of rowing.