This blog's correspondent in Sydney, Peter Miller, has sent another despatch:


One of the enjoyable facets of rowing on Sydney Harbour is discovering new launch points from which one can explore the foreshore sights. 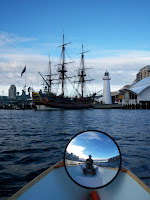 One such spot I came across last week was a park at Pyrmont which used to be the base of the Sydney Water Police on which the TV series Water Rats was (loosely) based. After getting a hand from a friendly jogger I launched off for a row from Blackwattle Bay near Anzac Bridge to Darling Harbour.
Just across the bay was moored the ex-HMAS Adelaide [see right side of panorama] which is facing an uncertain future. The frigate was scheduled to be scuttled close to shore up the coast in March to create an artificial reef and tourist destination for divers. However last minute moves by an environmental group concerned about PCB contamination have scuttled the scuttling for now. Many of the locals were upset as they had already ordered the sausages for the BBQ on the day and T-Shirts had been printed with the sinking date!

Rounding the headland and turning into Darling Harbour I came up next-to the Australian National Maritime Museum. The Museum is well worth an (official) visit as it has moored next to it a replica of the Endeavour which was launched in 1994. With a length of only 109 feet it is hard to believe Captain Cook sailed all the way around the world in something so small. Also moored at the museum is the sub HMAS Onslow commissioned in 1968 and whose motto was “Strength, silence, surprise". I guess it could have been worse. Apparently the unofficial crew motto of the USS Kamehameha was “Kam do”.
After being gently notified by the Museum security that I was actually on Museum water (“Sorry mate”) I rowed back snapping a pic of the fully restored 1874 James Craig on which the public can book trips. I am going to have put that one on the bucket list. 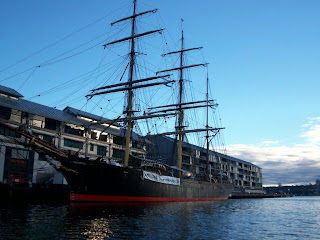 Thanks for that, Peter. US subs seem to specialise in awful mottos: USS Tunny has Illegitimi Non Carborundum. How do they translate that for visiting clergymen and ladies?

Posted by Chris Partridge at 20:44

I'm amazed we didn't paddle/row into each other on this journey! I also have photos of the Maritime boats (for a future post) but it looks like you beat me to it. And on the Security side, my experience was somewhat less cordial!! Great blog btw. Cheers - FP