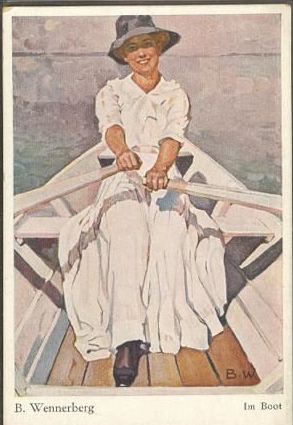 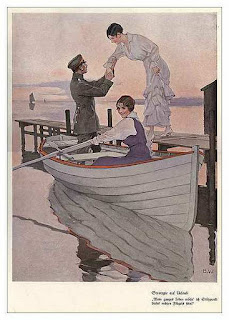 The Swedish illustrator Brynolf Wennerberg (1866-1950) produced some charming stuff including some attractive images of ladies rowing.
Unfortunately, his work has two drawbacks for today's British art lovers. One is that his best-known work was propaganda for the First World War German High Command - he had emigrated from his native Sweden to Munich, where he changed his name to Bruno and worked for various magazines. Actually it is pretty fluffy stuff including a series of postcards of horrific war scenes such as a girl tending a gruff soldier convalescing from what is clearly a flesh wound, and another of a girl greeting a postman bearing the grim news that her fiance has a slight hangover after winning a bar to his Iron Cross. In the card on the right, a couple of girls are taking a brave soldier out for a good time on the lake, the lucky fellow.
From a rowing point of view, however, Wennerberg commits the cardinal sin of portraying the lovely oarslady above sculling right-over-left. Tsk tsk.
Posted by Chris Partridge at 23:18

Anonymous commented (but I pressed the wrong button and deleted it, for which many apologies):
I used to row crew and I understood that Germans do typically row right-over-left, instead of the "standard' left-over-right. Maybe that's why the illustrations are done that way?

(If you already knew this, and were just saying "Tsk, tsk" because he wasn't "really" German, then... nevermind!)

Dear Anon:
No, I didn't know that although I did wonder. How interesting. I suppose it's like driving, it doesn't matter which side you choose as long as everyone does the same. It is a lovely picture anyway.

Of course, there's always the possibility that someone has reversed the negative....