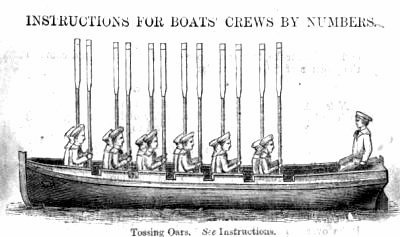 I learned the noble art of tossing oars today. All rowing boats taking part in the Queen's Diamond Jubilee Thames Pageant are required to perform this operation as part of a mass salute to Her Majesty, so we thought we had better learn how as it sounds like a recipe for dropping oars on people's heads and starring on YouTube for the rest of recorded time.
The procedure is described in an invaluable volume called the Boy's Manual of Seamanship and Gunnery, which should be on every boy's shelf. We had to adapt the system to bring the oars inboard a little so they could be lifted out of the crutches (the boat in the picture has simple ports in the gunwale). But as long as you don't rush and everyone follows stroke it is surprisingly easy and flowing. Everyone on the foreshore was very impressed.
Tossing oars had a practical use as well - it is very handy to be able to bring the oars up when approaching a harbour wall, pontoon or the side of a warship.
Tossing oars as a salute goes back to Norman times when ships entering English harbours were expected to salute the sovereign by letting the sails fly so the ship was effectively brought to a stop. The message was 'Your Majesty, I am helpless and submit to your mercy'. It was also a very visible token of peaceful intent. Tossing oars has the same function for rowing boats, patently bringing the boat to a halt so no hostile act could be contemplated.

Posted by Chris Partridge at 22:17

I had hoped that readers of a quality blog such as what this one is would refrain from cheap shots like that. Why is there no emoticon for 'rolls eyes in despair'?

Having oars vertical seems to place them in an ideal position for a hostile act on anyone nearby.

Maybe I need to consult further the Boy's Manual of Seamanship and Gunnery.

Actually that procedure reminds me of what was called "Presenting Arms" when we used to do rifle drill in the cadet force at school. It was also used as a salute and a sign of respect.

I wonder why it's called "tossing" when it's done with oars. You don't really "toss" them, do you?

By the way, don't forget to unship your poppets.

Had quite a fright when I first read the title, luv.

Hi Chris, I came across your blog when I was doing some research on the terms 'tossing the oars' I thoroughly enjoyed reading it and am totally envious of the fact that you were part of the Queen's Jubilee flotilla in 2012. Must have been amazing. We were one of the thousands of spectators at Vauxhall.
Thanks for the information, I have linked back to your blog via my website article relating to A Royal River Salute on the Thames yesterday to celebrate the Queen's amazing milestone. I was writing about the QRB Gloriana with which I am sure you are familiar ;)
Regards
Cindy
@3days_in_london