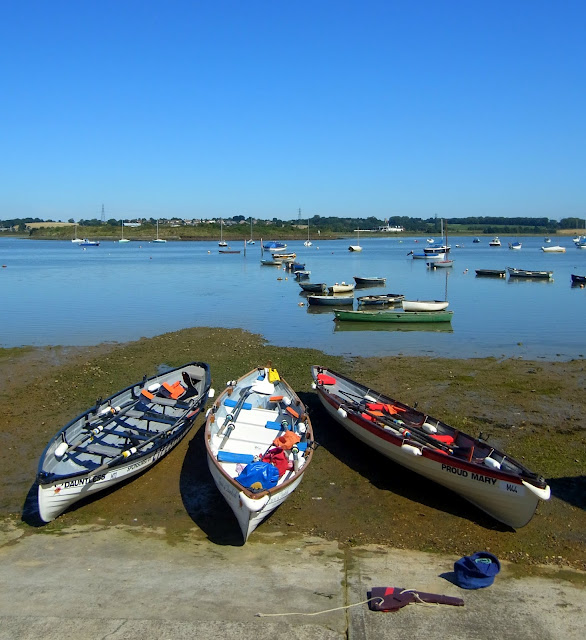 It's amazing but all you have to do is dump three boats on a beach and you automatically get a good image, this one taken at Manningtree last weekend. 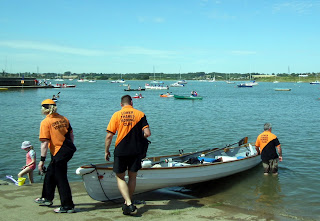 Dauntless and Proud Mary (left and right) were made by Keith Webster in Benfleet from 2005 on by modifying and lengthening a boat from Hanningfield. 24ft long, they have four rowing thwarts and a cox's seat and were dubbed Hanningfield hybrid gigs by the Great River Race organisers for the purposes of identification. The one in the middle was made by someone else.
The boats are owned by Lower Thames Rowing Club in Benfleet and Two Tree Island in Essex, who are regulars at the Great River Race and local regattas.
They are very effective boats - fast, light and relatively cheap to make. They are powered by standard carbon fibre blades (bought second hand from Putney RC).
Keith himself has moved on and has now started Seax Marine. One of his projects  is the Seax One Design gig. This will be longer, possibly 28ft, and will have greater spacing between the thwarts. Could this be the answer to my question yesterday?
(The original post has been updated)
Posted by Chris Partridge at 19:15

Just to clarify, the first two ltrc gigs were built by myself in 05 & 06, the class name given to them by the Great river race organisers was "Hanningfield hybrid Gig" which reflects their origins as a stretched modified 18ft skiff.
Seax one design is the class name of the new boat that i am building to a completely new design.
Cheers Keith

Thanks for that, Keith. So all the gigs in the picture are Hanningfield hybrid gigs?