Racing in the Sun 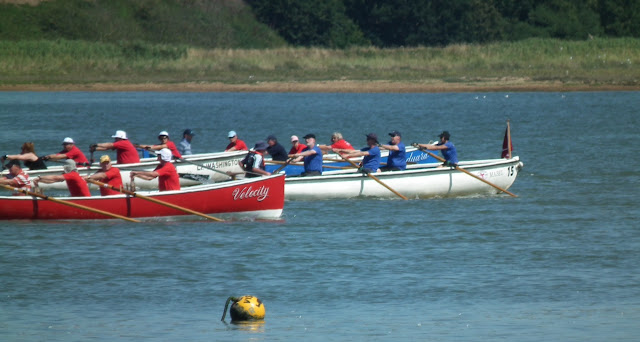 Langstone Cutters are in Manningtree on the lovely River Stour in Essex, at the Paddle and Oar Festival. Yesterday we took part in the Wrabness Challenge, a seven mile there-and-back race under a blazing sun (was it really raining apparently without end just a few weeks ago?).
This picture appears to show us in the lead at the start but that is an optical illusion. In fact we started at the middle of the pack and finished there too.
We failed to take advantage of local knowledge by gluing ourselves behind a local boat and staying there until the last reach, which took us over a mudbank that virtually glued us to the spot for several minutes. Damn.
Apart from that it was a great row. Other participants included the lovely new gigs from Brightlingsea, such as Velocity in the picture. They are very quick boats, even though their use of thole pins rather than rowlocks must slow them down a bit. More later on these.
Posted by Chris Partridge at 09:35