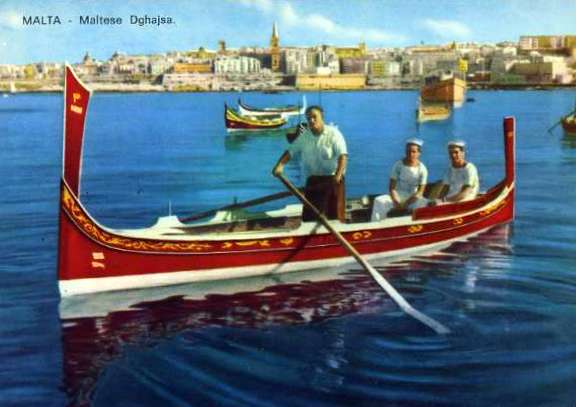 The Maltese Dghajsa was the taxi of the Grand Harbour in Valletta when it was the headquarters of the British Mediterranean Fleet. This old postcard shows a couple of jack tars going ashore for a jolly.
The Dghajsa (British sailors pronounced it dy'so) was rowed in a very curious way, reflecting a strange amalgam of Maltese and English styles. A single oarsman would row standing up with crossed oars, as in the picture. This would be the obvious thing to do in a protected harbour filled with fast-moving vessels.
When they wanted to go a bit faster, another rower would take one of the oars and row sitting down, facing backwards, to gain the extra power of the legs. The forward-facing oarsman would still be able to steer, of course.
Racing involved two forward and two rearward facing rowers, and they still race like this.
Two Dghajsas are competing in the Great River Race this year - I can't wait to overtake them in Gladys.
The late, great Cyril Tawney featured the Dghajsa in his poignant and moving song, the Ballad of Sammy's Bar, written when he was based in Malta during his time in the submarine service. I heard him sing it at Blackheath Folk Club many years ago - a totally memorable evening.

Posted by Chris Partridge at 15:59

The rowing style is from Venice. The sandolo is rowed with crossed oars, standing up, sometimes with two oarsmen. They are very fast, don't be fooled.
http://dory-man.blogspot.com/2009/06/sandolo.html

Sandolos are indeed very fast (http://rowingforpleasure.blogspot.co.uk/2007/11/venice.html), but I'm not sure a dghajsa can be pushed along as fast as those long, narrow boats. Venice is the place you see crossed-oars rowing the most, but it happens all round the Med.

As the story goes, these boats came from China with Marco Polo, who gets far too much credit.

Bloody hell. Someone told me 'dysoe' was a word used for an anchor on a naval ship, and for four decades or so I believed it....