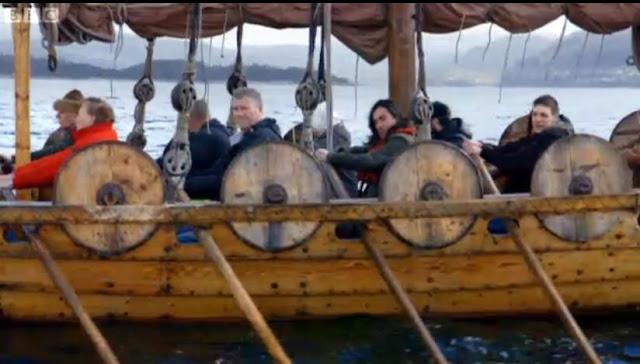 It's Vikings all over at the moment. The excellent Neil Oliver was on the box last night with the final chapter of his three-part history called, with unerring accuracy but little imagination, Vikings, and he was filmed rowing a reconstruction of a Viking ocean going ship designed for exploration rather than war. 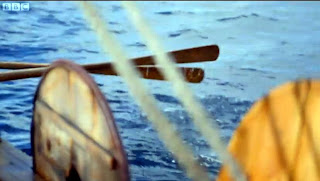 The ship is shorter and beamier than the long, sleek warships, to cope with Atlantic swells. Still had the shields hung on the gunwales, though.
I suppose it is a bit much to expect an academic on a punishing film schedule to get in a boat and row with perfect technique, and Oliver was disarmingly willing to be caught on camera clashing blades with his neighbour. "Hold on!" he shrieked. "It's all gone terrible!"
But the rest of the crew were no better. If they want me to go to Bergen and give them a few pointers, my rates are very reasonable. 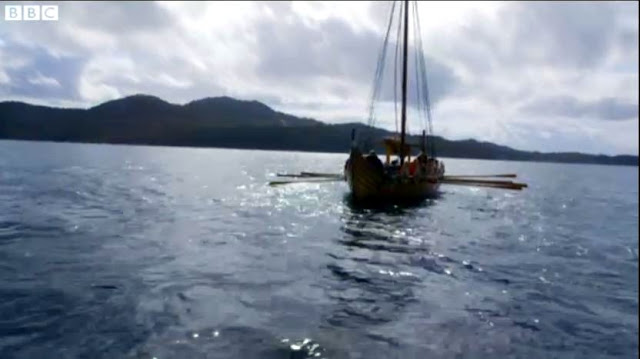 Posted by Chris Partridge at 08:44

Saw it last night: an endless series of beautifully framed shots of Neil Oliver walking towards the camera; away from the camera; close-up; far away, in profile. Oliver on a hill top, hair flying in the wind. In a church; on a boat (why was he the only one with a lifejacket?) Oliver looking pensive; reflective; amused, erudite.

I can only reckon the cameraman or maybe woman, had a secret crush on Mr Oliver. And, yes, the stuff about the Vikings was OK in a kind of potted, made-for-tv sort of way. But mainly it was about Neil Oliver and his unfeasibly long and unruly hair.

I totally agree. TV directors seem to have a mania for motion - either the screen has to be filled with crowds or waves or birds, or the presenter has to be sitting in a car, boat, train or plane. I am forever screaming for them to just POINT THE CAMERA AT THE SODDING SUBJECT AND LEAVE IT THERE SO I CAN SEE IT PROPERLY. Prof Oliver could then describe it properly, which he is very good at doing.