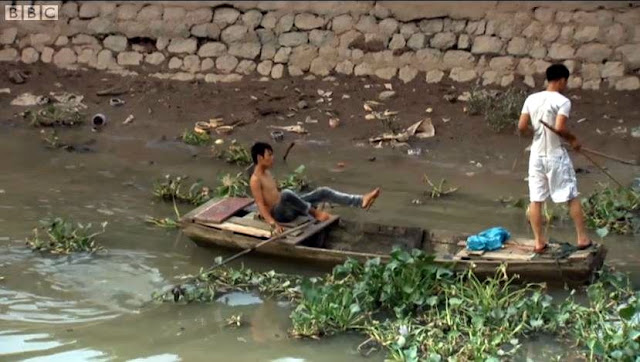 Watching Attenborough's Ark I was brought up short by a brief glimpse of this lad rowing down a shallow, polluted, garbage-strewn canal in China with his feet. Using his feet means he can row facing forwards. He even manages to feather a little.
It seems this is quite common, especially in Vietnam, where the clip below was filmed. I had never heard of it before. How difficult is it to learn? Would it be a good technique for Britain's canals, perhaps? I suspect that here on the South Coast with our big tidal currents it would not be an option.
Attenborough's Ark, by the way, is brilliant as Sir David always is. It is an excuse for him to choose ten animals that are interesting in different ways, either endangered, exotic, strange, endearing or simply bonkers. If you are in Britain, watch it on BBC iPlayer now. If you aren't, tough titties - campaign for your government to set up a BBC in your country now.

Posted by Chris Partridge at 17:47

I think that on most days you'd get bloody cold feet on Britain's canals doing that.

Google "Rowpedo" to check out my (patented in US) take on this. I'll send further info, if you'd like.