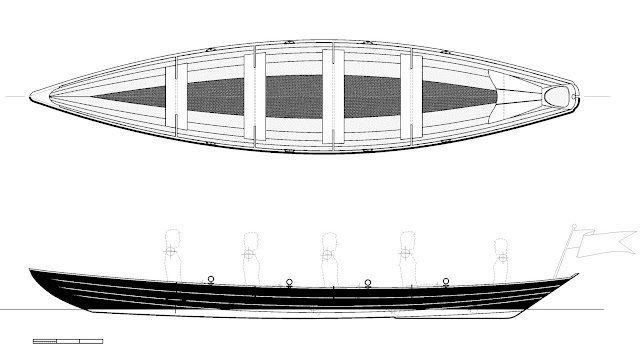 Neil Calore, the Philadelphia firefighter who rowed from Washington DC to New York for charity, is taking part in a community rowing project on the Delaware River in his home town. The team will build a quad-scull version of the dory Neil rowed.
The project has much in common with Scottish Coastal Rowing. The boat was designed and supplied in kit form by Chesapeake Light Craft of Annapolis, Maryland, and is being built by volunteers.
The boat will be based at The Independence Seaport Museum in Philadelphia.
Neil writes:

"John Harris of CLC has designed a 'Team Dory' specifically for this type of use which is very similar in design to the super-seaworthy 'Northeaster Dory' that I've built and sailed in various open water events recently.
ISM's program, starting next spring/summer, will provide public access to the river in the form of community rowing, and include educational elements for school kids to get acquainted with boating, fitness and nature.
If this boat takes off, I'm hope to also generate interest in some open water competition similar to the popular pilot gig races in Britain. Not to compare the two, but the stitch and glue version is much more affordable than traditional gigs, making it easier for more teams to form."

And we can all follow progress on the webcam in CLC's workshop, which starts tomorrow (Fifth of November, remember). Neil says that another is also being built on the Great Lakes, but his team has claimed Hull Number 001.
It looks like a great shape, although how the rudder will work with such a rakish stern remains to be seen.

Posted by Chris Partridge at 19:08