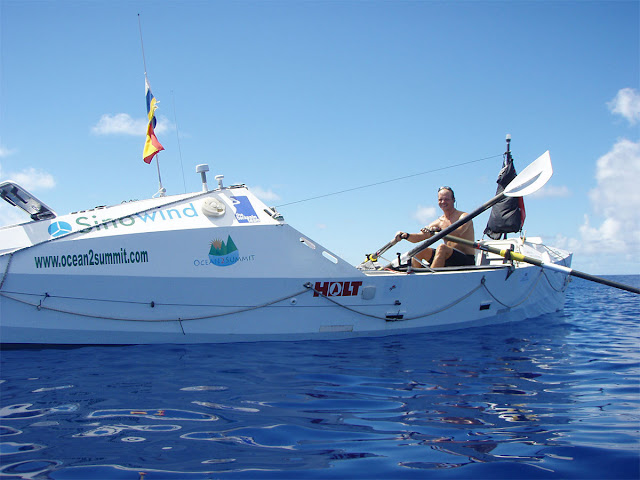 An irresponsible friend of mine who shall remain nameless but is actually Ratcatcher John, has irresponsibly suggested that I buy this and enter GB Row 2013, a 2,000 mile row round the entire coast of Britain.
The main attraction is the prize, £100,000, which is a lot of beer vouchers, but the problem is that ocean rowing boats such as the one above (currently on eBay at a starting price of six grand) are totally unsuitable.
In a long distance slog like this, it is not possible to keep the boat above hull speed. Previous round-Britain rowers have achieved times that indicate an average speed of about half the hull speed.
That means length wins. A longer boat goes faster for the same power input. There is no need to use sliding seats because it is possible to keep a boat at hull speed on fixed thwarts.
So the best boat for the race would be as long as possible, with as many rowers as you can cram in while providing enough space for off-duty rowers to cook their grub and grab some sleep.
A Viking ship, say.
Anyone got a Viking ship for sale?
Posted by Chris Partridge at 17:36

I cant help looking at the huge windage on those boats, not what i would choose!
As for the viking ship a sail is useful too!

Try the museum at Roskilde in Denmark. They might lend you Havhingsten!