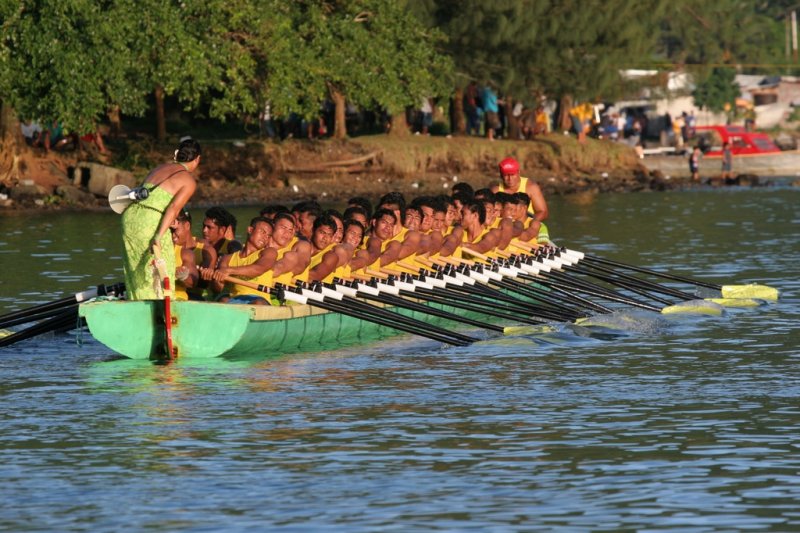 This blog has been contacted by Warwick Marler, Commissioner for Recreational and Tour Rowing at FISA, the world governing body for the sport, which is flattering. He recently made a presentation to a FISA executive conference on the need for a reference website for all rowing, and part of this was a video about an astonishing class of racing boat that was new to me - the Samoan fautasi.
The boats seem to be about a mile long and populated by entire villages.
Fautasi racing is pursued as fanatically in the islands as pilot gig rowing is in Cornwall, but the prizes are much higher - as much as 25,000 tala (£7,000). Prizes like that would guarantee a big turnout at any British regatta.
The boats were originally made from planks of a light but strong tree called the fau, but in the 1980s one village used plywood and fibreglass to create a shell that blew the opposition out of the water. Predictably, all racing fautasis are now in new materials.
Another thing that is changing is the male domination of the sport. See the woman coxwain in the picture? That is Zita Martel, the Queen of the longboats, and the first woman to compete and the first to be blessed as a skipper. She is featured in Warwick's video, which was the thing that got the FISA executive really excited, he says.
And this year, the first all-woman fautasi crew has started racing.
Posted by Chris Partridge at 09:37

Thanks for a great find - very interesting.