The eminent Helena Smalman-Smith of that great blog Expedition Rowing came to Langstone today to experience the wonders of the Solent galley. The 10 knot sou'westerly was already breezier than I'd expected when we set out at 15.00, but what followed came as something of a surprise. As shown on Cambermet, the wind built to over 20 knots gusting to 30.
When I looked back at the Met Office forecast on my return it was showing this retrospective:

Now I'm fairly sure it was a lot less than that when I checked first thing in the morning. How often does the forecast get updated? Was that squall predicted more than an hour or so ahead? I'm not criticising - forecasts are better than they ever have been - but it would have been nice to know.
Anyway, Helena got a fairly punishing row downwind to Emsworth in Solent galley Bembridge. After tea in the Deck we swapped over to the Tiefi skiff Lottie. The instant we left the shelter of the marina at about 17.00 it was apparent it had blown up something considerable. It was a hard, wet slog upwind to Langstone.
But fun. I think.
Back in the boat park, Helena and I took pictures of each other taking pictures of each other. 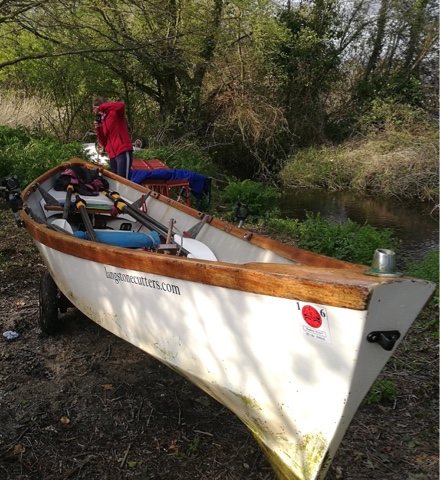 And so to beer.
And in the pub she gave me a wonderful rowing gift, a mug celebrating her trans-Atlantic row back in 2011 with her husband (to whom she is still married despite spending weeks cooped up with him in a floating wheelybin hundreds of miles from the nearest pub.)
The liquorice and those darling little clogs were presents from a departing Dutch student lodger. 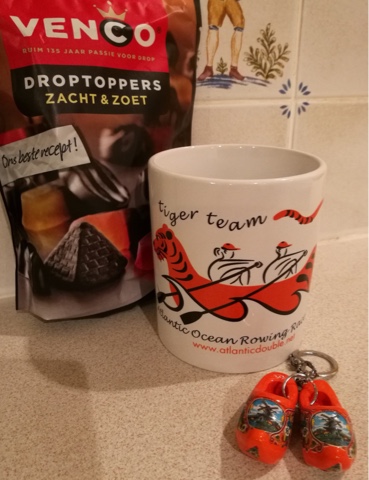 Weather forecasting around our coast must be tricky.
That said, it always amuses me that the TV forecasts spend twice as long telling everyone what the weather "has been today", as compared to what it will be tomorrow.
I'd guess that, unless we happen to be employed in an underground bunker, most of us have a reasonable idea of what the weather has been.