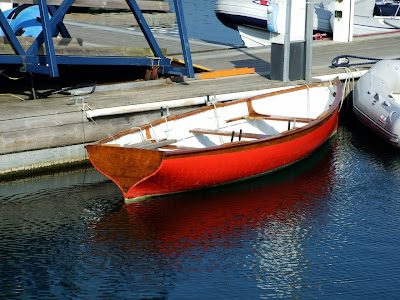 Gavin Atkin at intheboatshed.net photographed a skiff at Mylor, Cornwall, and asks what it is. Well, I'm told it is a 15ft skiff, the smallest traditional boat raced in Cornwall. Three oarsmen row it 'randan' style, with a sculler (two oars) in the middle and a rower (one oar) at each end. If you look carefully at the picture you can see there is only one pair of thole pins (used instead of rowlocks) next to the bow and stern thwarts, but a pair on either side of the centre thwart.
Here is a picture of one in action, taken by Brave Tales on Flickr. 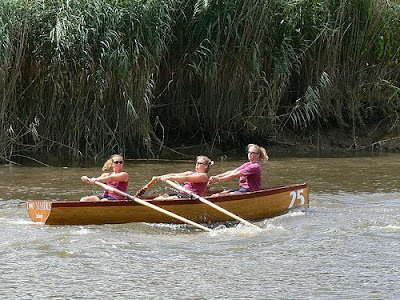 Posted by Chris Partridge at 22:52

Hi Brian - Flashboats are longer and are invariably crewed with four oars and a cox. Skiffs are about 15ft, coxless and have either two oars, two sculls or randan.

Thanks Chris, so difficult to find out information about these boats. So, is Paul Gartside's Flashboat not a Flashboat? Isn't his Flashboat and also Bob designed for rowing with one? Confused, Brian.

Paul knows much more about this than me, being an expat Cornishman and all, but I think his Flashboat is really a skiff with flashboat lines. If you look at the drawings you will see it has three rowing stations so it could be rowed randan.
Bob is a double-ender so it is neither.