Spirit of Mystery leaves for Australia 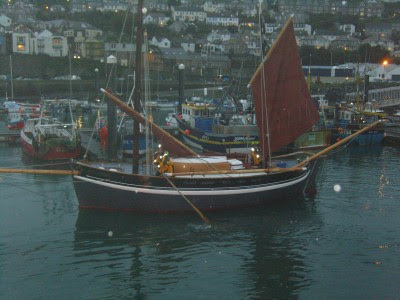 I interviewed yachtsman supreme Pete Goss for The Times a couple of months back and visited his replica Beer lugger at the Southampton Boat Show, but I didn't think I would get an excuse to write about his epic voyage from Cornwall to Australia here, as they are sailing not pulling.
Except that Spirit of Mystery is being rowed in and out of port in the old-fashioned way, in keeping with the aim of completing the voyage without modern aids. Swinging those great big sweeps looks like hard work.
Goss writes in his blog (which he is not writing with a quill pen):

"Rowing her out was amazing and I can't thank the supporters enough for the send off - particularly given the weather. In fact we were pretty chuffed at how good old 'Spirit of Mystery' rose to the moment as we hadn't really rowed her. We cleared the harbour at 1830hrs, filled the wind with sails and we were off into a dark, wet and rough old night. As soon as the RNLI boat turned back it felt like we had left and thoughts of home and family came flooding through and I gave Tracey a quick call to say we were off. The sun is out at the moment and I can clearly visualise her pottering about in the garden - roll on Cape Town."

Bon voyage, Spirit of Mystery!
Posted by Chris Partridge at 22:26

Lucky you getting to interview Mr Goss. I've written about them leaving too - but in my case I focused on their tragic lack of undergarments!

I got that press release too and I agree totally about the PR guy. Did he want to muscle in on the adventure with his aerial underwear rescue mission or what?

Maybe it was a desperate attempt to get some coverage - his original release about the Mystery's leaving went out with such a poor photo I can't imagine many papers picked it up - yet with a good shot it should have been a picture story for many.

But it could have been an question of vanity. The underpants release went out with a very clear and nicely taken photo of our PR hero leaning on his aeroplane and looking very smart and pleased.

Totally agree. Vanity and frustration that the underpants stunt didn't work - if it had, it would have got into all the papers without a doubt.