Not rowing in Madeira 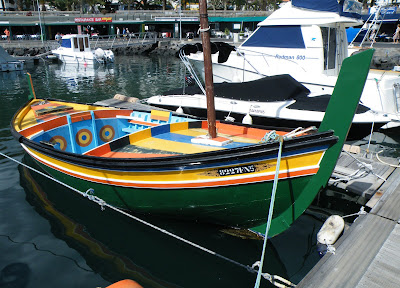 I've been to Madeira on business (ha!) so no rowing for a week. We went whale spotting and saw a couple of spouts in the faraway blue yonder but otherwise nothing, not even a friendly dolphin. Madeira's fishermen now rely on taking tourists out big game fishing if they want to kill blue fin tuna and marlin, and whale watching if they don't, so the harbour is wedged out with massive plastic speedboats. Only one traditional fishing boat shone out like a good deed in a naughty world, resplendent in her brightly patterned paintwork.

Outside, a rather nice cutter was parked.

Off the coast, I got a very long shot of a replica of Christopher Columbus's flagship Santa Maria, which is based in Funchal as part of the city's 500th anniversary celebrations. Columbus lived for several years in Funchal when he was a buyer in the sugar trade (not many people know that) and called there on one of his epic voyages. She seemed to be putting on a surprising turn of speed under mizzen alone - perhaps the replica is not quite as authentic as it seems.
A magnificent bronze mermaid adorns the harbour. I'm not sure if the all-over graffiti adds to her artistic quality or not. Someone has even tried to carve their name in a very difficult-to-reach spot.... 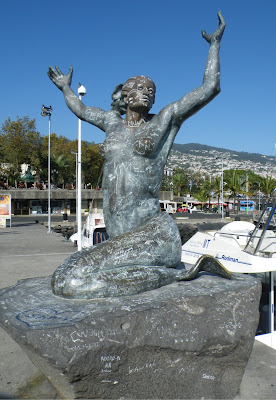 Posted by Chris Partridge at 09:55