David over at neversealand has kindly dedicated a dramatic picture of the replica Argo to me, so here is a mermaid (and a merman) for him. Not as sexy as the ones that appear on his blog, but arty as hell. Carved in 1831, they are the 'supporters' in the coat of arms of the Fishmongers Company, on their livery hall facing London Bridge. 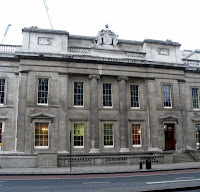 The Worshipful Company of Fishmongers is one of London's ancient guilds, tracing its origins back more than 700 years. They used to have a complete monopoly of the supply of fish in the city, but today they are concerned mainly with charitable work (being incrediby rich).
By the way, the thing the merman is brandishing is not a sword but a falchion, a broad blade designed to hack heads off. On the shield are three dolphins naiant (swimming right to left) and pairs of stockfishes (dried cod) with crowns on their mouths. What a wonderful thing heraldry is.
Posted by Chris Partridge at 10:00