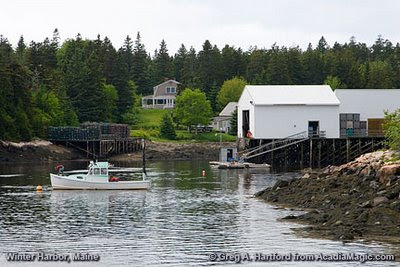 That prolific commentator A. Nonny Mouse, has sent a rather lovely poem in a comment on a post on winter rowing from last year. It seems a shame to leave it hidden in the annals, so I thought I would give it a post to itself:

It is by Richard O. Bickford of Winter Harbor, Maine, so the 'sound' refers to the harbour itself. The 'bedroom trap' is a lobster pot - Winter Harbor is a centre for the famous Maine lobster fishery, because the harbour never freezes (that's why it's called 'Winter Harbor'). Sadly, the fishermen have long abandoned rowing in favour of motor boats, but they had the good taste to develop a particularly the effective and attractive Maine lobster boat, justly admired the world over.
The poem is the introduction to Musquito Harbor: A Narrative History of Winter Harbor, Maine 1790-2005, by Allan Smallidge, who reckons it is all to do with the cadence of life in the town. He writes:

Many people may not be familiar with thole pins. They were early oarlocks for rowing boats, two wooden pins or dowels a few inches apart on each rail of a dory, which, if one were skillful enough, held the oars in place. Their rhythm was a regular cathunk, cathunk sound that carried soothingly over still, early morning water or groaned and squealed when the sea was rough and the rowing was strenuous.

The success of the rhythm depended a great deal upon the skill and the art of the rower, just as a contented life in the village of Winter Harbor depended a great deal upon a person’s ability to keep up with the rhythm, particularly the rhythm of the seasons. For it is a seasonal life in Winter Harbor. The summer people come and the summer people go; the lobster traps go out and the lobster traps come in; the summer moorings are dropped in the cove in the spring and come out again in the fall; the houses were once banked with brush (evergreen bows), and in the spring the brush was removed and burned in a pile in back of the house; the storm windows went on and the storm windows came off; wood was "manufactured" (sawn, split) and tiered, then burned, and ashes were carried out; the lamp chimneys were soiled in the
evening, cleaned in the morning, dirtied again the next night; Eastern Star met on Monday evenings, Masons on Wednesdays. Town meeting was always the first Monday in March, every March, school began the day after Labor Day, and Memorial Day was always observed. And thus it went, the rhythm of the days and of the seasons, sometimes gentle and soothing, sometimes protesting with agonizing squeals and groans like the thole pin rhythms on the sound.

Musquito Harbor: A Narrative History of Winter Harbor, Maine 1790-2005 is published by Ironbound Press. The picture is from Acadiamagic.com.
Posted by Chris Partridge at 17:41