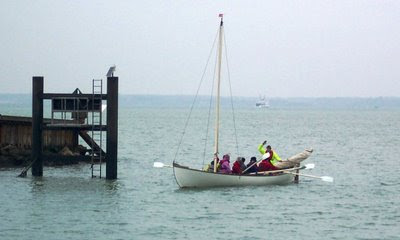 The intrepid Henley Whalers visited the Isle of Wight on New Year's Day, a civilised jaunt from Lymington to Yarmouth where they had lunch at the King's Head. I was busy elsewhere, sadly.
The trip across went swimmingly, as Geoff reported by text message: 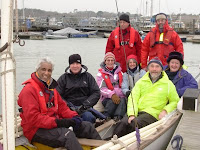 Hi Chris. Sorry you couldn't join us. We had a very quick row across. Just 1 hour 11 minutes. We were so early we had to wait outside the pub before it opened. Hope to meet up soon. Geoff

The journey back was less smooth, however, as Geoff emailed later:

The wind was a gentle east north-east, but high tide had been at 13:00 and a current was now running firmly to the West. One tack across The Solent brought Molly to the North shore, rather west of Lymington. The return tack brought Molly almost back to the mouth of Yarmouth harbour– Disconcerting!

Another big tack to the north shore and they were even further down-current of their objective, so there was nothing for it but to break out the oars. Molly arrived back at the slipway in the dark.

On reflection, it might have been better nautical practice to have SAILED from Lymington to Yarmouth (with the wind on the port quarter), and to have ROWED back. One straight row into the light wind, would have been easy with eight crew even after a large lunch, and might have taken only an hour and a half.
Still – No harm done, and a great day out celebrated at the Lymington slipway with Christmas cake and Madeiran Poncha. Same again next year maybe?

Sounds like a great trip, despite the long slog back. More about the Henley Whalers here. 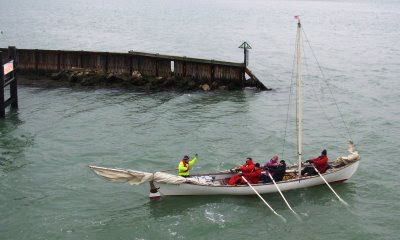 Good indication of why sailing and racing around here is so interesting. Shame I missed Molly. Brian