Seine boats on the Teign 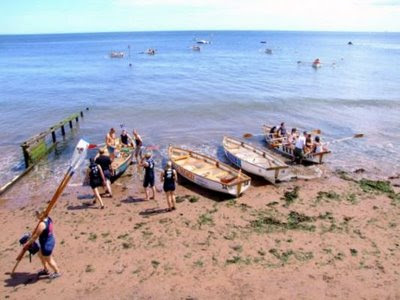 The seine boats of old mentioned in Monday's post are still raced in, I believe, just two locations in the world.
One is the River Teign in the Devon, where fibreglass copies of an original boat were made by a boatbuilder called Alan Chaney. The boats are now owned by members of the River Teign Rowing Club, who run a punishing agenda of races through the summer.
The seine boats are rowed by four oars and a cox and competition is fierce, as you can tell from the length of the crew lists. The names are most inventive. My faves are the Busty Rollocks (Senior Ladies, would you believe) and the Up Y'oars (Men, and Vets so should know better). 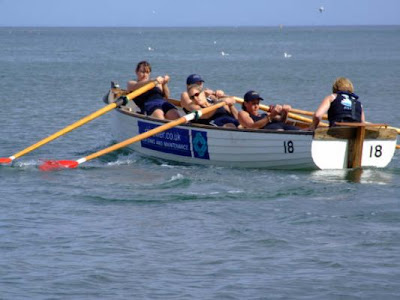 The boats are 17ft long and built for carrying lots of fish rather than going very fast, so they are hard work to row as many of the pictures show. But just as rewarding when you win.
The picturesque River Teign couldn't be matched as a place for rowing. Or can it? I'll post the location of the other seine boat racing hotspot tomorrow.
Posted by Chris Partridge at 21:35