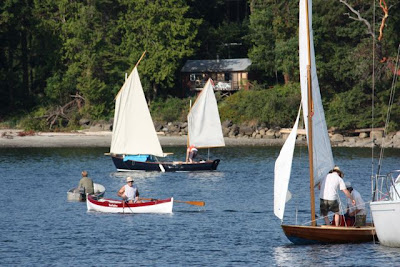 The Shipyard School Raid takes place in the rugged and beautiful scenery of British Columbia, with names like Jedediah Island and Desolation Sound. This year it was blessed with great weather, with none of the rain for which the region is famous.
Two interesting rowing boats entered.
Bus Bailey is a 1930s handliner, a sleek double ender. Owner Colin Masson rowed her to victory in one leg and an overall second place, demonstrating that you don't have to sail to win.
Tuvaak is an umiak, a skin on frame boat built by Sea Scouts in Kent, Washington, helped by kayak guru Corey Freedman. The 26ft boat can be rowed by a crew of up to twelve, though the Raid crew consisted of seven youths and two adults, so it could be sailed as well as rowed. She came fourth. 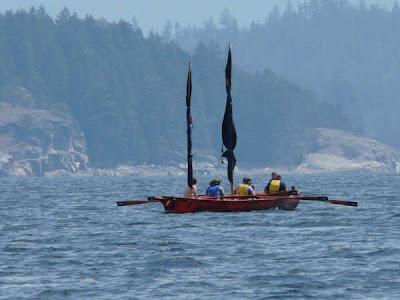 Posted by Chris Partridge at 21:48

I was very taken by the excellent looks and performance of 'Bus Bailey'. Handliners look to be interesting boats for non competitive leisure rowing, coincidentally I was looking at some a few days ago, have you seen this site Chris : http://westlakeboats.ca/, a handful of handliners here for the experienced homebuilder.