I never thought I would turn into a Martha Stewart fan - I'm not keen on all that floral print stuff in the house. But it turns out she is a boatie, and has just acquired an Adirondack guide boat from the Adirondack Guide Boat company in Vermont. She even featured it on her show - here is the segment:

I always wanted to know how the crossed handles that are compulsory on guide boats work, and the film clearly shows the way they hands are placed the same height but one in front of the other. 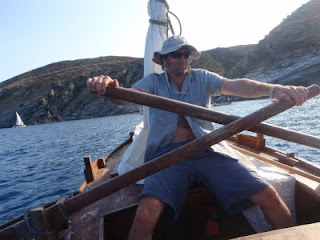 Crossed oars, on the other hand, are much more difficult to handle, as Ben of The Invisible Workshop has just discovered when he got to row a traditional Spanish dorna. Ben says it was difficult to get the blades far enough out of the water on the return, and would not recommend them for long distances. Very interesting.
Posted by Chris Partridge at 19:59

Chris, there is a thread running on the Australian Wooden Boat Forum at the moment about coastal rowing boat design. There has just been a super contribution about rowing the Guide boat is very rough conditions. Posts 96 and 97 of this thread

I love Martha Stewart... As a New York State Licensed Guide I have always favored the ADK Guide Boat for my water excursions...