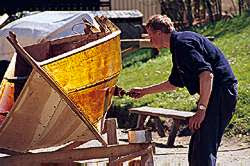 The BBC/Open University prog Coast went to Norway this week, and saw traditional clinker boats being built. The excitable Mark Horton drove a boat nail and peened the nail over the rove. The Norwegian boatbuilder told him with a straight face that the noise of the nail against the dolly was a 'clink' and this is why the boatbuilding style is called 'clinker'. Mark believed him.
All balls. According to Webster, the word is derived from clench.
But the boats were stunning. Lovely faerings that would have been instantly recognisable to the Vikings. The programme can be viewed on the web here (but only if you are in the UK).
The section was filmed at the Hardanger Ship Preservation Centre, which makes and sells a range of marine stuff from hand-forged iron fittings to rowing and sailing boats made under the direction of some of the last remaining traditionally-trained boatbuilders in the country. Their lovely Osterfjord boat is pictured above being coated with tar.
Posted by Chris Partridge at 22:37