Crews up pressure for L2P 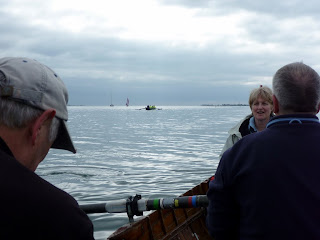 Out today for a row in the Solent Galley Bembridge down Emsworth channel towards East Head, with stunning displays of dunlins sweeping round in massive flocks, and seals popping their heads out of the water to say hello.
On the way back we came up with the Reivers12 crew in their Thames Waterman's cutter, who had just set a new record time for a circumnagation of Hayling Island at just over 3 hours for the 15 mile course, as part of their training for the looming London to Paris challenge.
Langstone Cutters' own Ian Mclennan was coxing, and Mike Gilbert was off to London to advise another crew, the Outloars. The LCRC crew that won the first London to Paris challenge is now, I think, advising all three entrants for the 2010 event in May. 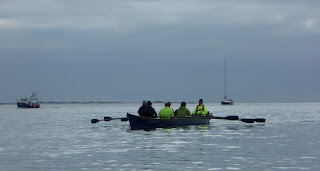 Posted by Chris Partridge at 20:15