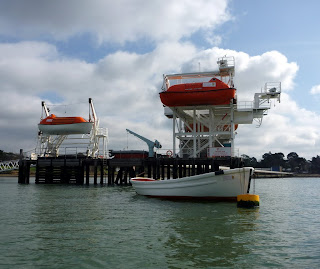 I met up with the Dinghy Cruising Association at Warsash today. Warsash sits on the southern bank of the River Hamble where it debouches (great word) into Southampton Water.
I had never dared take little Snarleyow into the southern end of this wide and heavily-used waterway before, but the wind had died away so I went for it.
First landmark was the somewhat bizarre jetty of the Warsash Maritime Academy, where officers of the Merchant Marine are trained. Here they practice lifeboat drill on real lifeboats. In front was a pulling boat of stupendous vastitude and glassiness, which looks like really hard work to row. But as mariners nowadays spend all their time sitting in front of computer screens controlling the ship by joystick, it might help them keep those spare tyres under control.
Then off to Langstone, where the Cutters celebrated the start of the new season with the Blessing of the Boats by the Rector of Havant, who rather sportingly went for a row afterwards. As I had Snarleyow on the back of the car, it seemed a shame not to put her in the water, so she got blessed too. Nice.
PS:
What is the difference between the Moon and Southampton Water?
The Moon is shiny and bright.
Posted by Chris Partridge at 22:45