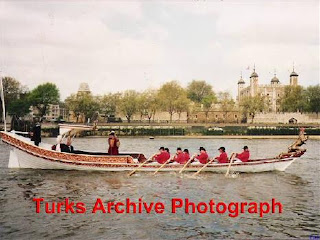 If you were impressed by the sight of David Dimbleby swanning up the Thames in a royal shallop, get your credit card out and schlep over to the Turks Online Auction where another example of one of these wonderful craft is going under the hammer.
The shallop is one of the many marine film props collected by Turks Film Services over the years, and featured in A Man for All Seasons, the film of Robert Bolt's play about the life and death of Sir Thomas More, and Elizabeth: The Golden Age with Cate Blanchett.
The shallop is 15.3m long by 2.4m beam, and comes with ten oars and a rudder. I suspect the various canopies that feature in the films have long gone, but would be easily replaced. 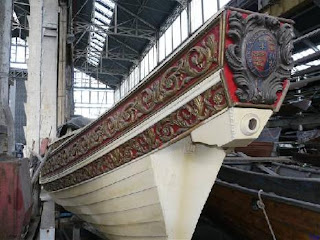 I really really want it, though with a crew of 11 it wouldn't be the purchase price but the running costs that might be the killer.
Turks have been in the film business since the 1950s, when the family boatyard in Kingston-on-Thames began to supply boats to the movie studios clustered to the west of London at Pinewood, Shepperton and so on. They have a collection of over 200 assorted craft from kayaks to 50ft Viking longships stored in a shed in Chatham Dockyard.
Now, however, the film industry is increasingly using computers to generate boats out of thin cyberspace, where the effects are more dramatic and delicate film luvvies don't have to get cold and wet. So Turks are auctioning the lot over the next month or so. And there are some corkers in there - more on this later.
Thanks to Peter Williams for the headsup.
Posted by Chris Partridge at 17:53