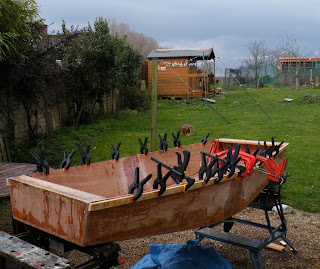 With the inside fillets well hard, the hull was turned over and lain on two carefully levelled and aligned workmates. The duct tape came off with a deeply satisfying ripping noise (almost as good as popping bubble wrap).
The seams were then taped over, a messy process comprising splashing on a coat of resin, applying the tape, folding the tape over the angle and swearing mightily when it popped back up again. Patience and firm pressure is needed. Finally, another application of resin to fill the weave as much as possible. Leave to harden.
When hard, I pasted on another coat of resin+filler to fill the weave completely and fair the edge of the tape. Again, returning periodically as it hardened allowed runs to be swiped off and sags to be corrected, at least partially. 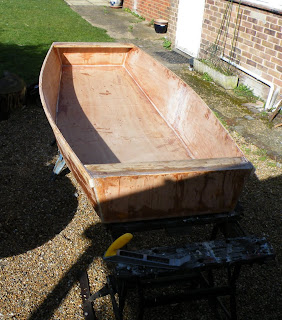 The seams finished, it was time to add the little decks. The original design has breasthooks, but I happened to have some timber liberated from Bracklesham Beach when a container ship went down a few years back. It was a very simple matter to cut a couple of pieces to size, securing them with epoxy and a few leftover gripfasts.
The original design also has no gunwales, but the thin ply I used meant gunwales were essential. They were glued in place and nailed at the ends. This is where every builder traditionally says "you can never have too many clamps". So there - I've said it.
Then it was sanding, sanding and sanding until I swore a mighty oath of ENOUGH!
I have become a great fan of water based exterior paint for boats, It is so much cheaper than two-pot epoxy paint and you can touch up dings with ease. It dries so quickly you can get three coats on in a day. And washing the brush out in water is such a joy compared with horrible white spirit. Better for the environment too. The only minus is that it only comes in silk finish, so you can't get a yotty sheen.
I just had time (one hour before launch!) to add a thwart in the middle and a pair of rowlocks (both leftover kit from my previous boat Nessy) and it was off to Pulborough.
Tomorrow: lessons learned.
Posted by Chris Partridge at 10:28

You can't fool us - it's a wheel barrow - look forward to seeing it with the handles and front wheel fitted!!

we all know its 1st April

No no, it's a boat honest. And it will be fitted with some new extremely sexy nav lights I have just seen on the interwebs....

What glue did you use on Gunwales.

I used epoxy. Balcotan would have been good enough I think but I wanted to make absolutely sure the join held because it keeps the curve of the sides.