This extraordinary mechanism is a fine example of a Victorian bow-facing rowing system that John Blondell has in his shed. They have a lever in the middle that reverses the direction the oar moves, so when you pull it pushes, if you see what I mean. Bow-facing rowing was popular with duck hunters who needed to look forward as they moved in on their prey, but did not need a huge amount of speed.
John writes:


I am in possession of a set of F.A. Allen bow-facing oars that I received from my father many years ago.  They are stored in the rafters of my shed. My father acquired them probably in the mid 1930's. I remember as a small child being in a rowboat and my father using these oars. This was at Colville Park in Red Wing, Minnesota.  Do these have any value as I may be interested in finding a new home for them. I would think that these oars are quite rare.
John Blondell

If anyone is interested in the unit, email me using the link on the right ------->
and I will pass your message on to John.
F.A. Allen patented his system in 1894 and it seems to have been quite popular, but it was not the first. One W. Lyman patented this similar mechanism in 1875, but it is pivoted at different points: 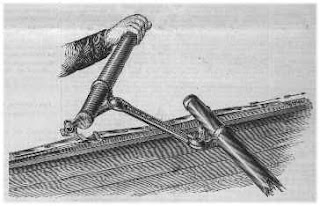 Articulated forward-facing rowing devices are still available today, mostly in the US. Gig Harbor Boats offer this gadget, that seems to operate in almost exactly the same way as Allen's but made in modern stainless steel: 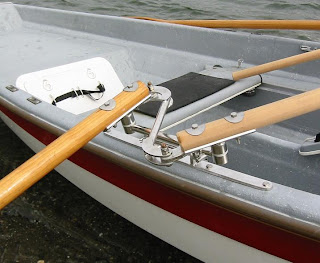 Interestingly, the system was developed by creating a prototype in aluminium, which obviously quickly wore and broke but in ways that showed up the weaknesses of the design. Computer software was then used to create a better mechanism that would transmit the power more efficiently and feel easier to row. Here it is in action:
EZ-Row make drop-in unit complete with riggers and seat that can be installed in a canoe or any suitable hull, and RowRite have an updated mechanism using gears that folds up neatly on the gunwale when not in use.
Posted by Chris Partridge at 10:58

I don't know, it all looks a little too complicated.

If god had intended for us to row facing forward he would have given us eyes in the front of our heads!!

I have a set of FA Allen oars also. Wondering if anyone knows what the value of these may be?

Your link maybe gone, but I'm still interested in any knowledge available about these oars. My email is recurve@charter.net
Thank you.

I have an old set of these bow-facing oars. The hing seems to have been made by GM Copeland. Does anyone know the worth? You can message me at paintpalntn@yahoo.com. Thanks.