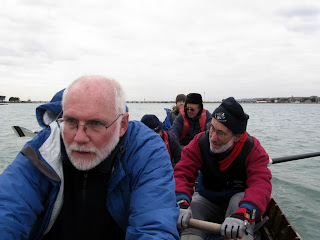 Went out for a fabulous row in the evening yesterday. The sky was blue, the wind light but warm, both of which facts should have alerted you to the fact that this pic of me and (from front to back) Nigel, Jenny, Peter and Dawn of Langstone Cutters, was taken last winter. But I include it now to illustrate the need to make the most of your pectoral girdle when rowing. See how my shoulders are hunched up as I lean forward for the catch? Apparently this is all wrong.
This came to light when I was rowing a skiff a couple of weeks back with qualified rowing coach Julia Rooke. Initially I thought the pectoral girdle was something you got from Victoria's Secret, but she explained it is a set of muscles that hold the shoulders together. I mentioned it in passing, but Micheal Bogoger, legendary in cyberspace as Doryman, wanted further and better particulars, as lawyers say.


Chris,
Are you going to share this new rowing technique with us? We want to go fast too!

Well, Michael, here is the griff from Julia and husband Steve, who knows all there is to know about technique:


The muscle that lifts the shoulders to the ears is the 'trapezius' - this acts as a fixator for the 'latissimus dorsii' (agonist) and 'anterior deltoid' (synergist) in the work phase of the stroke.
The reason for not lifting the shoulders up (in vertical motion towards ears) at the beginning of the stroke is, that it restricts the range of movement and does not allow the elbows and shoulders to pass behind the bodyline at the finish of the stroke, ending up with a 'hunched' body position over the handles. More relaxed shoulders also improve use of body weight while working the blade in the water.

Since then I have been trying to lower the shoulders at the catch and it really does work - it feels as if you are doing much less work.
And doing less work has been my life's objective.
Posted by Chris Partridge at 08:16

Thanks for sharing this. I just returned home from a sculling camp and there was a lot of talk about this very subject.

Having been taught the classic arms away - body over style of rowing, the concept of using the lats to pull was new to me, but I also found the technique much easier once I "got it". I also found that I can pull through with much more power than when the shoulder girdle is engaged.

Keep up the good work, I enjoy reading your blog.