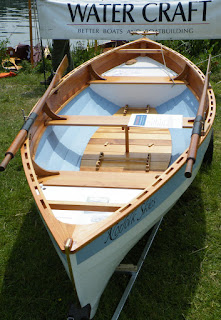 One of the stars of Water Craft magazine's boatbuilding competition was Norfolk Skies, a stunning little boat by Nick Coppin. It is a smaller version of a traditional 18ft Sheringham crab boat, a little (12ft 4in) double-ended beach boat from the North Norfolk coast. Nick copied the lines from a book and made a half model before building her of ply, Douglas fir and oak.
Norfolk Skies has an inwale with thole pins, but the original Sheringham boats had an interesting local type of rowlock called an 'orruck'. The top plank or sheer strake had no inwale and was very wide and thick, and holes were pierced through it to hold the shafts of the oars. 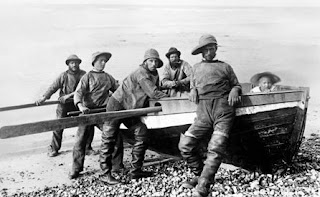 When the boat was beached, the oars would be slid into the boat and used as handles to carry the boat to safety above the high water line, as shown in this picture from about 1893.
OGA Holyhead has a nice video of the launch at the Old Gaffers event at Lechlade previously.

Posted by Chris Partridge at 21:07