A Chester Yawl in New Hampshire 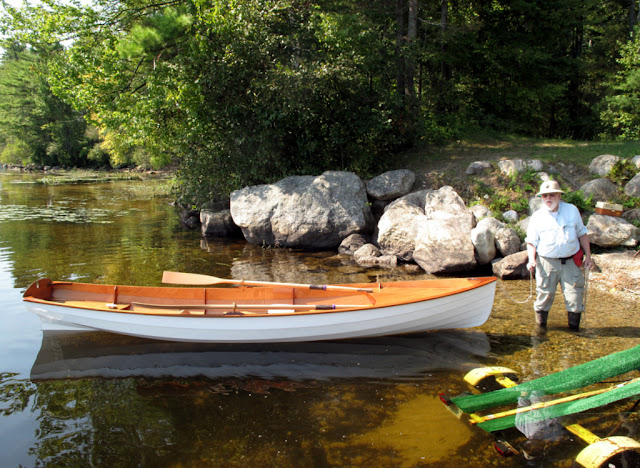 Malcolm Forbes lives in southern New Hampshire, one of the lovely places of the world with its woods, lakes and rocky coast, so clearly he needs a rowing boat. Back in May he found what he wanted at the Chesapeake Light Craft Okoume Festival when he spotted the Chester Yawl. In fact, he was so taken with it he bought the kit even before he got a chance to row the demo boat - 'buy before you try' isn't the usual advice.
Malcolm writes: 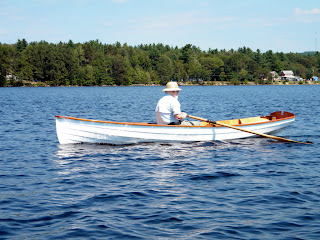 It has taken me three months to get her into the water. Several names for the yawl are under active consideration, one to be selected after the "sea trials" are complete. I do have favorites, one in particular which would look well on the transom in Celtic lettering, is appropriate in my mind, but does not quite roll off my tongue. I have always had trouble coming up with names - the worst case was when the hospital told us that unless we named our newborn baby, they wouldn't let us take her home.
I live near several nice lakes and the Merrimack River, all suitable for rowing. The ocean is about an hour's drive away, ranging from Boston to the south and Portsmouth to the north. All in all, I have plenty of opportunities. Now I need to find a good spot for a cruise in the Yawl, with shoreside camping. In the meantime I need to row as much as possible before winter closes in on us in order to get in shape for next summer (where did this summer go?)
Malcolm 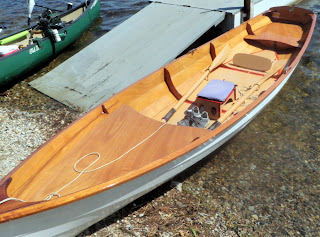 What a nice job. The boat has lots of features I like, such as the movable rowing seat. This means it can be taken right out of the way if you want to use the middle of the boat for gear, and can be adjusted as well as the stretcher so the rowlocks are in exactly the right position for a good swing. I noticed only the other day that despite my long arms I don't reach as far forwards as others in the crew, and realised that it is because even with the stretchers in the most forward position I am sitting right on the back of the thwart. Everyone else sits right at the front of their thwart. Lack of enough adjustment is a big pain for rowers of average height such as myself (6ft 5in).
Malcolm has created a really nice photostream on Flickr showing the construction process.
And I love his sun hat. Where did you get it, Malcolm?

Posted by Chris Partridge at 10:13

Nice build!
I would like some suggestions for a multi-day river / coastal row in new england this fall... i also built a chester yawl and need some ideas ( with camping spots along the way! not as easy as you might think)

One idea that has occurred to me is to work on the 70 miles from Whitehall, NY, to Albany in the NY State canal system. They allow camping at the locks, and I suspect just hauling up somewhere would also work.
Not sure that I am ready yet for a 70 miler, but other pull outs are available.
Malcolm