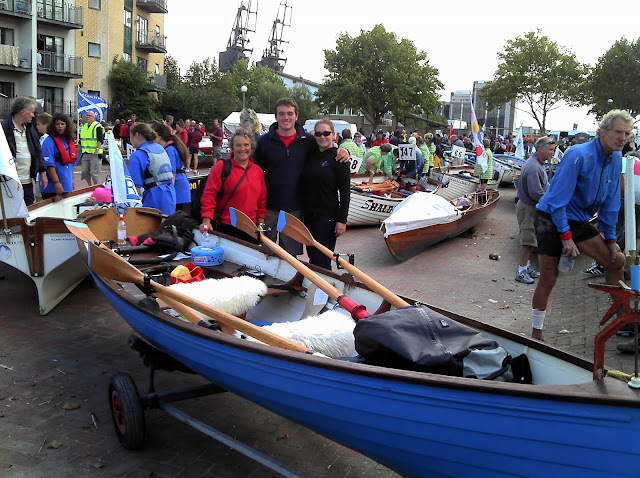 Starting at number 14 at the Great River Race was Kingfisher, an Iain Oughtred-designed Acorn skiff rowed by Hamble-based father-and-son team Philip and Ben and crewed by a couple of lads from their sailing club. Here is Ben with support crew at the Millwall slipway before the race.
The Meakins led the field until close to the finishing line, when they came up against the Richmond half-tide lock, a barrier that maintains water levels upstream at low tide. There they were prevented from going further by a PLA official until the barrier was fully raised, delaying them for about five minutes. 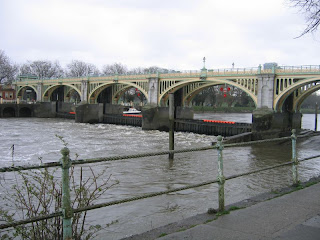 "We were spitting!" Philip writes, with British understatement. "It seemed like we were waiting for ages but I gather we were timed at 4.5mts ahead of Maggie [a previous race winner starting at number 20] at Hammersmith (ie 1/2mt faster than the starting gap). Maggie arrived at the lock about 30 seconds before they let us through."
A few minutes after their arrival, a Celtic longboat and two dragon boats came up and also had to wait a while. Of course, immediately the way was open they stormed to the finish.
Kingfisher eventually came in 9th and Maggie 11th.
You can see the event unrolling on the Great River Race's satellite tracking page, though it isn't easy as the display software is a bit rubbish, and you can't see the lock because the map only shows road bridges.
This is clearly grossly unfair - small boats like Kingfisher and Maggie have no reserves of speed to draw on if they lose time in this way. It is entirely possible that Kingfisher was robbed of the trophy.
This is not a one-off problem either - apparently it has happened before.
The raw GPS data should enable the organisers to assess a new time for Kingfisher and Maggie with some exactness and should do so immediately.
This is a problem that needs to be addressed for future years.
Posted by Chris Partridge at 10:08

The PLA could easily have adjusted the opening time so it was open by the time the first boat arrived. They adjust it all the time. They are so incompetent.