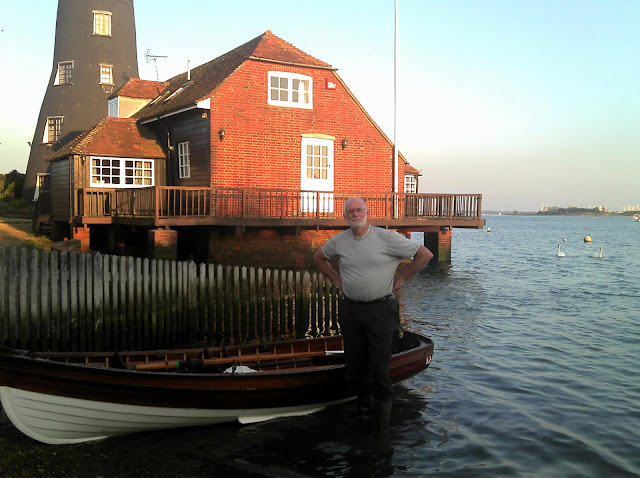 You wouldn't believe this pic was taken today, October 3. An Indian summer has struck southern England, bringing the warmest October days since records began. So we are all furiously getting out to enjoy it as it will be the last chance we get for months and months and months.
One of the few joys of being one's own boss is that one can give the worker permission to skive off occasionally, so as the rest of the year is predicted to be dreary and cold I sloped off in the afternoon to take Kittiwake out for a little fishing trip down the harbour. Didn't catch anything, predictably, but had a lovely, lovely time.
On Saturday I rowed up the lovely River Hamble with Langstone Cutters, but left my phone in the car so these pics are courtesy of crew member Graham Lloyd. No fewer than 13 people turned up wanting to get the good row in before it gets cold, so we took Clayton skiff Mabel and Mike Gilbert's Cornish pilot gig Annie. Hamble River Rowers were out in strength too.
Lessons learned:
1) When launching into a river with the tide making at high speed, don't move the boat from the slip to the pontoon however convenient it looks. The current will jam you up on the pontoon and you will have to fight the boat off. Launch directly off the hard where there is no current.
2) When securing the boat on the trailer, check the loose ends of the tie-downs are properly secured or they will wrap round the axle and bring you to a complete halt on a busy intersection and you will be very embarrassed.
Posted by Chris Partridge at 22:20

congrats with the nice weather and enjoy. Thats a very happy man on the top picture. Kittiwake is sweet. Are you going to rig her and put sails on her? (he-he)

didn't realise that was you in the yellow gig!!

I thought I spotted you ahead as we went up - at that time I was in Mabel, but came down in the gig. Pity we missed you!

Anders - Phil Bolger said he couldn't understand all the people who said 'that's a nice rowing boat, let's sail her'.
And I agree. Anyway, she's not my boat but belongs to another member of Langstone Cutters so I can't.....