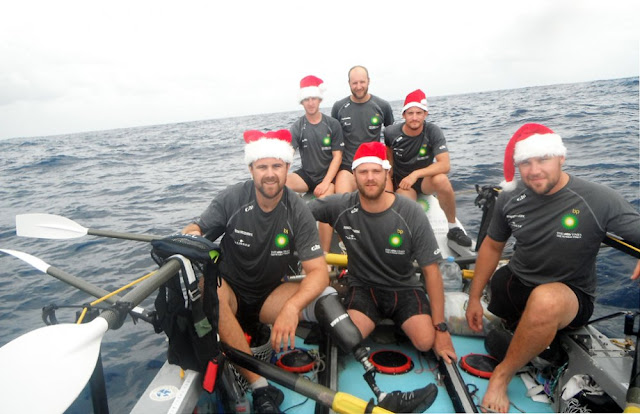 I recently posted a lengthy whine about the condition known to doctors as 'skiffer's arse', but the latest blog post from transatlantic rower Rory Mackenzie puts it all in perspective.
Cpl Mackenzie, an Army medic, had his right leg blown off by a roadside bomb in Basra. Now he is taking part in the Atlantic Challenge with an Army crew including three other amputees - Row2Recovery.
However hard you train, the real thing is always tougher and Rory discovered as then pushed westwards that the pain was unbearable. Some previously undetected fragments of shrapnel, just pinhead size, were working their way to the skin as the muscles were working.
So this was Rory's Christmas:
"On Christmas Day I dosed myself up on some pretty hard core painkillers and spent ages gazing in the mirror at my behind – not recommended – and picking away with a pair of tweezers to try and pull out the offending shrapnel. I also scrubbed the area pretty aggressively as well. To be honest I was pretty spaced out while I was doing it but it seems to have done the trick."

Amazingly, he is back in the rowing seat and pleased as Punch: "I feel like I’ve been given a new lease of life. It’s so good to really feel like I’m playing my part in things rather than just being a big lump that the rest of the boys have to row across to Barbados."
We saw Row2Recovery come in at the Great River Race, when they got a storm of applause. They are clearly going from strength to strength, currently positioned fourth in the twelve boats still in the race.
You can follow them here, and please donate lavishly here.
Posted by Chris Partridge at 10:46

Report here that they have a serious water shortage.
http://www.telegraph.co.uk/news/newstopics/onthefrontline/8985920/Race-to-reach-war-wounded-rowers-as-they-battle-across-the-Atlantic.html