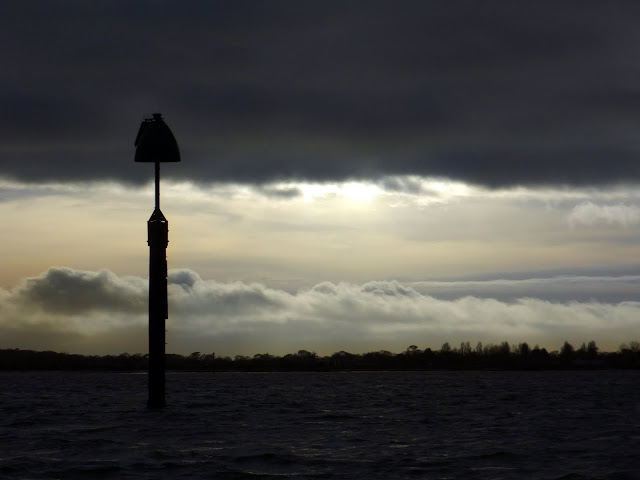 What with the tides and the weather, rowing is very hit and miss at the moment. High tides right now are before dawn and after dark, and a line of fronts rolling in from the Atlantic has brought rain seemingly on most of the times when the tide was in and the light on simultaneously.
On the last day of the year, there was a window of opportunity at the end of the day so I went out in Kittiwake to Marker Point, a sticky-out bit of Thorney Island. You can tell it is Marker Point because opposite is this great big post, which has 'Marker' on it in big letters. 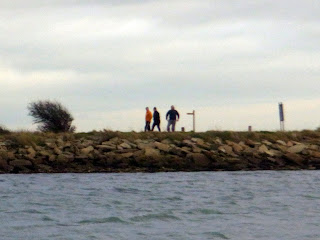 As I rounded the post I heard a distant voice. Someone on shore was hailing, but I couldn't see who it was or hear properly. I think it was Steve - if it was you, why weren't you out rowing in your Alden, eh?
Today, the plan was to row to the Isle of Wight from Lee-on-the-Solent and meet Henley Whalers for lunch. Unfortunately, the low tide means we are restricted to the slipways that go all the way, and all of them are blocked by banks of shingle. And the wind is predicted to be an easterly F4/5 right onto the slipways, which will mean launching will be wild and wet. So it is all off. Today I will go and photograph all the mass dials in Sussex.
Posted by Chris Partridge at 08:50

Didn't know about mass dials, so that's another thing to look out for. Apparently there are lots here in Kent...