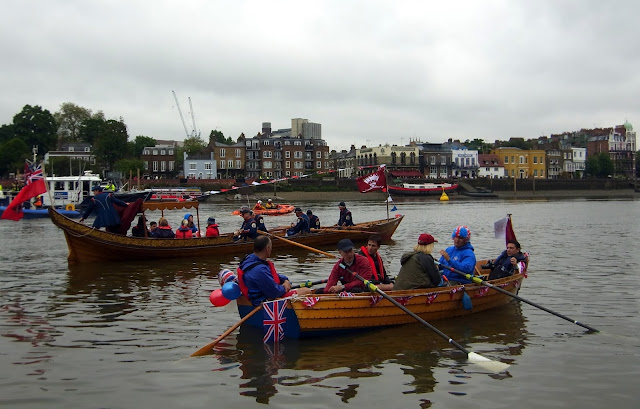 One of my favourite boats in the Diamond Jubilee Pageant was Jack Charlton, a little clinker dinghy presented by the 1966 World Cup star Jack Charlton to a Tyneside charity. They later disposed of it to the current owner.
I really admired the small boats in the display - they rowed just as far as everyone else with fewer rowers and greater restrictions on speed. But Jack Charlton appealed particularly because of its unique rowing configuration - they could not use the middle rowing station for some reason (either a broken oar or a lost rowlock, I think), so they improvised by putting a couple of people with paddles in their place. They seemed to do alright. Slow, though.
Just a week later, Jack Charlton has been put on eBay. The condition is described as recently revarnished with 'a few minor scratches (arising from the Pageant)'. She is in Henley and you will need at least £800 to buy her.

Posted by Chris Partridge at 22:11

I can buy Jackie Charlton for 800 quid? Can he still play?