Venetians on the Thames 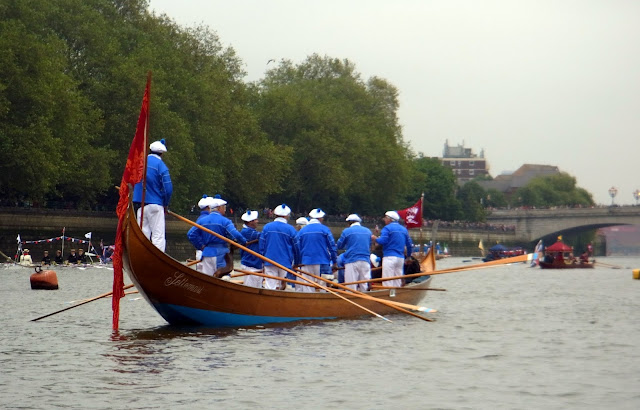 After the Royal Row Barge Gloriana, which effortlessly dominated the river with her gilt-carven-bulkitude, the most impressive sight at the Diamond Jubilee Pageant was the pair of huge gondolas manned by Venetians, with accompanying sandolos brought by City Barge in Oxford, a club devoted to the less common forms of rowing. 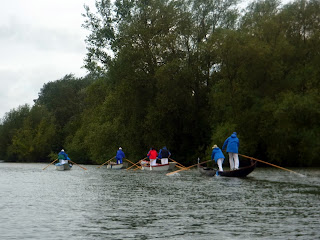 We came up with them again on Wednesday in Abingdon lock - they were also going to participate in the Beale Park Thames Boat Show. The big gondolas were not there, unfortunately, but it was still a pretty sight to see four sandolos and a gondola in such a quintessential English scene. Several of the Italians were with the party.
The big sandolo (below) was built in Stratford-upon-Avon fairly recently, but the gondola was made in Venice in 1904 for an exhibition in London. Afterwards, she was bought by the romantic novelist Marie Corelli, who lived in Stratford. The sight of her and her companion being rowed on the Avon by her tame gondolier was a notable tourist attraction for years. Corelli (born Mary Mackay) was without doubt one of the worst novelists in history, right down there with Jeffrey Archer, with whom she shares many stylistic traits. Try Thelma - I defy you to get to Chapter Two. 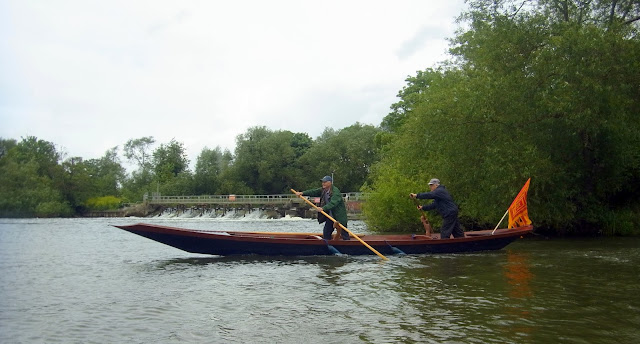 Posted by Chris Partridge at 10:06

Love those sandolos! I hope to build one someday, as soon as I figure out how to carve the forcole.